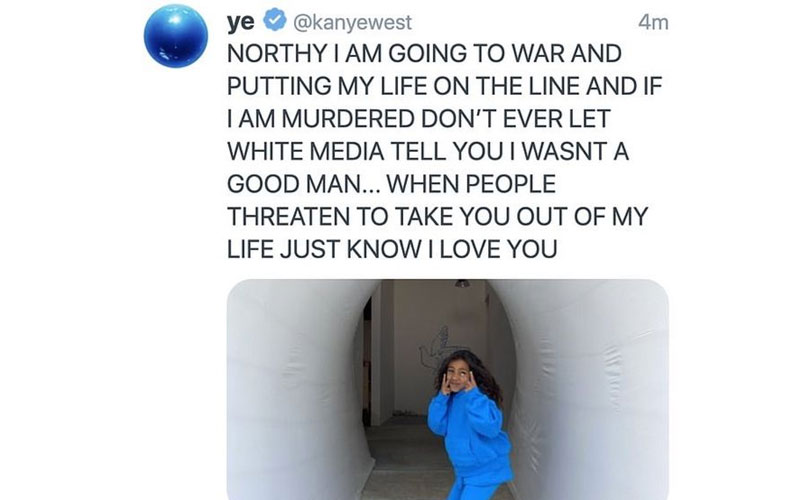 Kanye West has sparked concern after sharing a disturbing tweet about his fears he was going to be murdered and have his eldest daughter North taken away from him. The rap star, 43, has been sharing increasingly erratic messages on Twitter - which led to him being banned from the site this week. On Friday he sparked concern among his 30million followers after posting a worrying message addressed to his seven-year-old North - which was later deleted.

The Yeezy star wrote: "NORTHY I AM GOING TO WAR AND PUTTING MY LIFE ON THE LINE AND IF I AM MURDERED DON'T EVER LET WHITE MEDIA TELL YOU I WASNT A GOOD MAN... WHEN PEOPLE THREATEN TO TAKE YOU OUT OF MY LIFE JUST KNOW I LOVE YOU."

Alongside the message, Kanye, who shared four children with wife Kim added a picture of his eldest giving peace signs to the camera. The tweet sparked an outpouring of messages from shocked fans who urged the mogul to get help.

“We saw your deleted tweet. You need help from doctors, family and friends. This is not going to end well without that. First doctors," one replied. "Stop it. Get some help," another advised the star.

Kanye said he was going to offer up his services to make sure that Taylor got her master recordings back from producer Scooter Braun. Earlier this year Braun bought Big Machine Records, who own Taylor's first six album masters which infuriated the pop starlet. Alerting to his followers that he was going to try and redeem the recordings where Taylor had failed, Kanye tweeted: "I'M GOING TO PERSONALLY SEE TO IT THAT TAYLOR SWIFT GETS HER MASTERS BACK. SCOOTER IS A CLOSE FAMILY FRIEND."

His latest rant came just after Kanye found himself banned from Twitter for 24 hours after tweeting the phone number of a Forbes magazine editor. Kanye shared the private information and asked his followers to call the editor, violating Twitter's strict privacy rules. This week it was reported Kim Kardashian was 'at the end of her rope' with Kanye over his social media rantings. A source told People magazine in the US that Kim could 'only take so much.'

"It’s the same thing over and over and over again. He’s on very thin ice with her right now, and she’s truly trying to decide what to do to protect the kids, but also her own sanity. The whole thing is discouraging and difficult for her," claimed the insider.