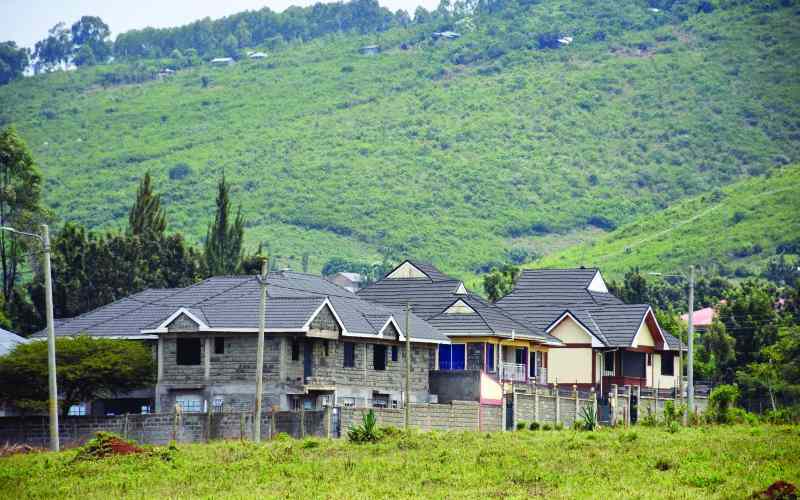 Wealthy businessmen and politicians are transforming Kisumu city’s outlying areas into a residential paradise, thanks to land shortage in the once-famous neighbourhoods. Steep and rocky hills that stood in the horizons of Kisumu are now turning into leafy-suburbs as investors’ appetite hits fever pitch and land prices skyrocket.

This trend has been attributed to the ever-shrinking land for residential and commercial developments in a city sandwiched between Lake Victoria, an expansive airport and Kano plains, which is synonymous with flooding. The recently renovated port alone sits on 20.4 square kilometres of land while Kenya Railways owns thousands of acres. The land occupied by the two entities is nearly a quarter the size of the town.

Among areas that have seen a transformation are Riat, Kajulu and Maseno hills, which house posh facilities and homes of prominent people. The hills also house facilities such as a modern health centre known as Kisumu Specialists hospital, the Susan Owiyo Art Centre, Ramogi Institute of Technology and several posh resorts.

So fast is the growth that the area is now challenging the oldest posh estate of Milimani, which is slowly losing its exclusivity as a leafy suburb. When The Standard visited recently, construction workers were busy putting final touches on one of the palatial homes whose construction began late last year. The owner of the home, a senior businessman who asked not to be named, said he was attracted to the area because of its scenic views.

“With modern architecture, people are now able to construct incredible houses even on steep slopes. This is the new Kisumu. It is cool and has the perfect mix of town and village life,” said the homeowner. A few metres away stands the palatial home of Orange party leader Raila Odinga.

Other high-ranking personalities with residences on the hills include Kisumu West MP Olago Aluoch, Nyando MP Jared Okello, and a host of Asian tycoons and prominent lawyers. A number of investors, leaders and homeowners interviewed attributed the developments to availability of land in the area as well as a good road network.

Bernard Onyango, one of the leading real estate agents in Kisumu, said property prices in the area have continued to skyrocket. “Kisumu is growing and that is why most properties are now coming up on the outskirts of the town,” said Mr Onyango. In parts of Riat and Ojolla, a quarter of an acre fetches up to Sh3 million.

It is a magical transformation for an area which in the past was deserted, characterised by thick bushes on steep slopes. Only a handful of people lived there, with houses scattered and miles apart. From the area, one can enjoy the scenic views of Lake Victoria, including the beautiful evening sunset as well as the Kisumu International Airport and its runway.

Kenya National Chamber of Commerce Kisumu branch chairman Israel Agina said the growth will transform Kisumu into a regional economic hub. “We cannot have bungalows within the city anymore and that is why we are witnessing emergence of skyscrapers on the hills,” said Mr Agina, an economist.

He said the expansion of the town would continue and in a few years, all neighbouring villages would be at the epicentre of the town’s development. Kisumu city manager Doris Ombara said there are plans to improve amenities in the areas surrounding the town.

But with the developments come environmental degradation. The expansion has seen part of natural forests and indigenous trees destroyed to pave way for the construction of homes. Environmentalists said if the ongoing growth is not monitored, the rich hills could soon turn into bare land and worsen soil erosion and silting of Lake Victoria.

Michael Nyaguti, an environmentalist, warned that the infrastructural developments taking place around the hills surrounding Kisumu may be disastrous in the long-run.

“We are hoping that even as development continues, investors will plant trees so that the soil is not washed away,” said Mr Nyaguti, adding that they will petition the National Environment Management Authority to ensure those putting up houses on Riat and Kajulu hills protect indigenous trees. Among key facilities serving the new Kisumu ‘paradise’ is the mega Lake Basin Development Mall, located on the Kisumu-Kakamega road.

The mall is easily accessible to residents of Riat and Kajulu hills. Measuring about 60,000 square feet, the five-floor facility has about 140 shops, a three-star hotel, showrooms, and a parking area that can accommodate 335 cars. The mall is the major facility serving the rapidly growing new estates. LBDA chairman Odoyo Owidi said the modern mall has turned around fortunes of hundreds of Kisumu residents.

Railways ward Member of County Assembly David Arao, whose ward lies within the area, told The Standard that the construction of the Chemelil-Mamboleo road would open up the area further. “We are hoping the road will be tarmacked up to the airport to help serve Riat Hills and areas around it,” said Mr Arao. The area has also attracted high-end hotels and other hospitality-related facilities.

Four celebrities who are utilizing lockdown to lose weight

Who bailed you? Akothee reacts to reports Rue spent night in police custody

How to get rid of oily skin

Why single mums with girls are hot cakes