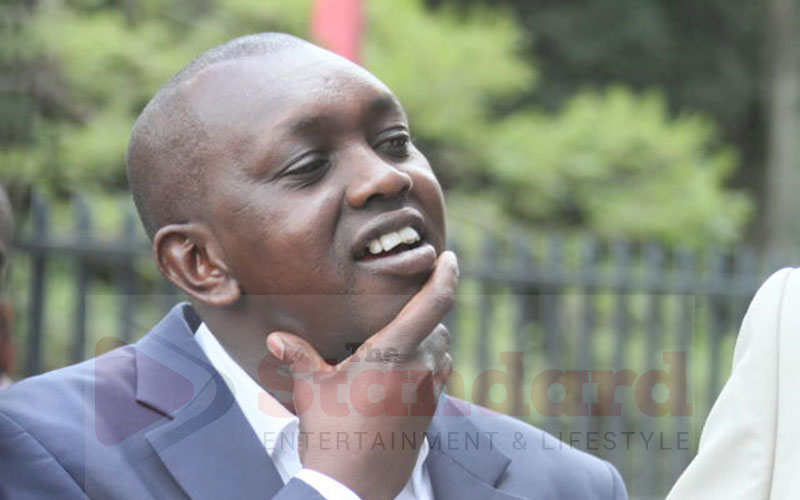 The MP for Kapseret in Eldoret was a makanga and cattle herder who now lives in a Sh100 million house. Never mind that he first came to Nairobi in 1998 and was so jazzed by the sight of a TV, he bought a black and white one for his mabati house in his rural home. Oscar Sudi was another faceless Kenyan hustler before the 2013 General Election.

Affluence is now the norm for this son of a charcoal dealer who has since been nicknamed the ‘Sonko of Eldoret.’ He rolls in money, power and all the controversies that come with wielding both. And he does not shy from flaunting his two wives. He stunned Uasin Gishu residents in 2016 when Deputy President William Ruto came to open his Sh100 million home in Kapseret.

Attributing his good fortunes to sheer hard work, respect and care for humanity, Sudi previously narrated his story to The Nairobian.

“I was born in 1980, my parents were squatters in the Moi University area and all we had was a grass-thatched house in the farm of Mzee Kibor arap Talai who allowed us to stay on his farm but on a temporary basis. I used to sleep in the kitchen with my two brothers.”

Sudi revealed that his mother was jobless while his dad was a charcoal dealer whose income from selling Sh40 charcoal bags provided fees for him at Tulwop-Ngetuny Primary School.

“In 1994, I bought a second-hand bicycle from my accumulated savings, which helped me ferry charcoal to clients. I later sold the bike and bought a new one for Sh3,800. That year, my father had helped my mum open a grocery business at Moi University-Main Campus roundabout, where I would sometimes help her,” explained Sudi, whose dad was sacked in 1995 and hence their focus on charcoal and grocery business to make ends meet. It was at his mother’s grocery where young Sudi made friends with matatu operators and began touting.

“The conductors became my friends and I began working as a parking boy in 1996. After six months, I got introduced to one matatu owner, Mzee Barnabas Sawe, whose vehicles were labelled Carlos,” said Sudi.

After one and half years, Sudi learnt how to drive and when he turned 18 in1998, he began driving matatus and saved money from his salary to buy fertilizer and seeds. He says that he cultivated three-acres and then seven acres the following year.

“In 2000, I got married and moved to an iron-sheet house with my wife. That is when I bought my matatu Peugeot 504 and operated it with Sawe’s fleet. The following year, I travelled to Nairobi with a friend for the first time and bought a black and white TV and a radio,” said Sudi, who was in Nairobi with his friend, Stephen Sorgor. His entrepreneurial nature was such that seeing Nairobians paying to play the game of pool saw him thinking of duplicating the same in Eldoret.

“I then borrowed Sh110,000 and bought two tables which I installed in Kesses and they really made me good money. I bought five other tables that I gradually I installed at Moi University, Mugundoi and Cherangany areas as I operated my matatu.”

Sudi claimed that he then sold the matatu and bought a Toyota saloon and a Mazda pick-up to help coordinate his business and it was while buying the cars that he got interested in motor dealership.

“I went to Mombasa and bought a car which I sold for a good profit in Eldoret. In Mombasa, I met the current Kericho Governor Paul Chepkwony who was then a lecturer. He linked me with his comrades whom I would assist to purchase cars duty-free because they enjoyed the exemption.”

Wealthy Mombasa businessman David Lagat reportedly noticed Sudi’s aggressiveness and extended deals to him for his massive clearing and forwarding agency, which eventually stretched to land deals in Uasin Gishu. It was through Lagat that Sudi met powerful people, among them former Lugari MP Cyrus Jirongo and current Deputy President William Ruto who was then Eldoret North MP. Business mixed with political connections grows and with it, political interests that saw Sudi campaign for David Koros for the Eldoret South seat in 2003 “but he abandoned us when he got into power.”

According to Sudi, “I was conned of Sh11 million two years later by money launderers and had to go back to the drawing board. I sold most of my property and borrowed Sh400,000 from Sorgor to stay afloat in business.” He also reportedly relied on David Lagat’s connections for more car and land deals to revive his fortunes.

He added that: “I was close to Ruto and used to wonder how he could do a lot for the public through CDF projects and representation in Parliament. I felt the need to get into politics to address issues our leaders had failed to tackle.”

Kapseret Constituency was hived off Eldoret South Constituency providing an opportunity for Sudi to vie during the 2013 General Election on Ruto’s United Republican Party (URP) ticket and the rest, as they say, is history.

Njambi Koikai speaks of the frustrations Endometriosis patients go through