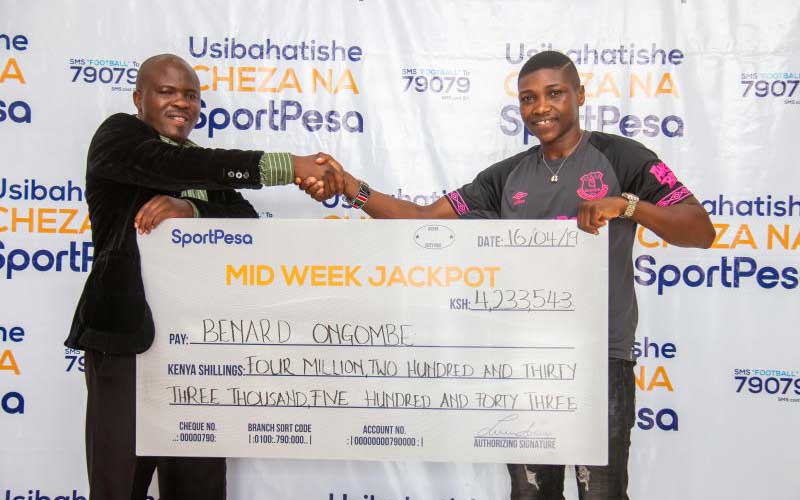 Betting and sports enthusiasts can continue placing their bids under SportPesa after the High Court lifted the betting board's ban on the use of that brand name in the country. And soon after High Court judge Pauline Nyamweya gave the order yesterday, Betting Control and Licensing Board (BCLB) chairman Cyrus Maina lifted the suspension on Milestone Games Limited, which was to fly the SportPesa brand. In her ruling, Nyamweya directed that the BCLB’s decision should not be effected until the case filed by Milestone Games is heard and determined.

“The leave granted herein shall operate as a stay of execution and implementation by the respondent and the interested parties of the respondent’s decision communicated in the letters dated October 30, 2020, and October 31, 2020, of the substantive judicial review application or until further orders by this court,” she ruled.

Pevans East Africa Limited was the first user of SportPesa brand name in Kenya and had sealed it as a major sporting brand. However, BCLB cancelled its license and the name faded from the market. But Milestone Games adopted the same brand name after the BCLB gave it the green light to operate in the country in October. This attracted the wrath of the regulator, which withdrew its license, claiming that SportPesa belonged to Pevans and therefore not available to any other firm. In court, Milestone's lawyers Otieno Ogola and Company Advocates said the BCLB unilaterally took the drastic action without giving it a chance to explain why and how it got the name SportPesa.

“The impugned decisions were arrived at in an opaque and arbitrary manner and there is no explanation for the adverse measures that were chosen and what criteria guided the process,” court records read.

The betting regulator had banned Milestone from using the name SportPesa or domains, www.ke.sportpesa.com, www.sportpesa.co.ke or pay bill numbers allocated by either Safaricom or Airtel to Pevans. However, Milestone argues that Pevans does not own the SportPesa trademark. Instead, it claims, SportPesa is owned by SportPesa Global Holdings Limited, which authorised it to operate using its name.

The court heard that the only reason BCLB banned Milestone was because of the use of the contested name. Milestone’s operations manager Bernard Chauro, in his replying affidavit, explained that the board issued it with a licence on October 6, 2020 and was to run until June 30, 2021.

According to Chauro, Milestone was required to provide BCLB with, among other things, a link of all their betting websites for monitoring. They were also required to provide all their shortcodes, pay bill numbers or any other mode of payment, deposits or withdrawals it would use for its betting business. The judge heard that the board gave Milestone a go-ahead after finding that it had fully complied. Milestone now says the board’s turnaround was drastic, unlawful and unfair. Justice Nyamweya gave BCLB 14 days to reply. She directed the case to be heard on January 25, 2021.