'Tumeachana so many times,' DJ Mo speaks on his imperfect marriage

'I broke down on the phone...' Betty Kyallo on why she has been off social media 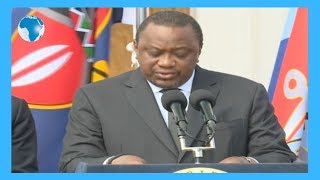 The former president, who died on Tuesday aged 95, will be buried at his Kabarak home in Nakuru County on Wednesday, February 12.

Kenyans of all walks of life will have three days from Saturday to Monday to view the body, which will be lying in state at Parliament Buildings.

Head of Public Service Joseph Kinyua said President Uhuru Kenyatta will be the first to view the body on Saturday at 10.15 am.

The body left the funeral home after 7am with the casket draped in the national flag.

The funeral procession snaked through Valley Road to Kenyatta Avenue and on to Parliament Road after which a military parade will be mounted in his honour.

Moi, who died on Tuesday aged 95, will be buried at his Kabarak home in Nakuru County on Wednesday, February 12.

Tulijua ni kiki mnatafta! Fans react to Jowie and his wife Ella's video of them in bed

'My life began the day we spoke,' Ghanaian actor professes his love for Zari

We miss the true blessings, says Njugush as he recalls fondest childhood memories

Why meal timing is as important as what you eat

Strict protocols as schools are set to re-open

How to plan for a new month

Exclusive: Socialite Vanessa disappears, leaves her children in the care of relatives