Snow closes in on victory at Sigona

Annoying things men do before and after pekejeng (List) 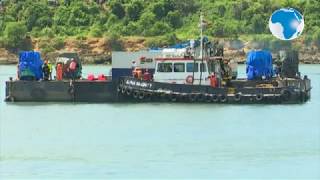 The process of retrieving the vehicle that slipped off a ferry at the Likoni channel crossing and sunk into the Indian Ocean with a woman and her daughter has begun.

Government Spokesperson Cyrus Oguna said the process, which was scheduled to begin at 9am Thursday, delayed due to traffic at the ferry channel and strong currents currently being experienced in the deep sea.

“We are retrieving the vehicle, we would not want to risk the lives of the divers involved in this operation,” Mr Oguna said.

The Kenya Navy and Southern Engineering Company Ltd, a shipping company in Mombasa, are leading the operation.

Thousands of Kenyans, who stood in solidarity with the bereaved family, watched the recovery process at the Likoni channel.

Two days ago, the government announced that an object not common in the ocean lay underwater in a mud layer of 1.5 meters.

On Wednesday, Mr Oguna confirmed that the object was indeed the vehicle with the number plate KCB 289C.

The vehicle will be pulled out of the ocean using a crane. Mr Oguna said after retrieval, the police will be in charge of the bodies.

On Thursday, a video exclusively obtained by Nation captured by 3D cameras showed the white vehicle trapped in the sea bed.

The government said it had compared the image of the car to that which was captured on CCTV by Kenya Ferry Services cameras and confirmed that it was the same vehicle. As the recovery continued, normal activities were going on at the Likoni Channel.

It has been 12 days since Mariam Kighenda and her daughter Amanda Mutheu drowned in the Indian Ocean after their vehicle, a Toyota Isis slipped off the ferry, MV Harambee.

Their family has been camping at the Mbaraki Wharf, hoping to find the bodies. The recovery operations have been done by a multi-agency team led by the Kenya Navy and South African divers hired by the family and some by the government.

Sophisticated equipment including multi beam cameras were used to capture images under the water during the search.

Youths to get cash incentives for fighting HIV/Aids

Dorm burnt as fire breaks out at Chebwagan School in Kericho

Jamaican dancer Bumpa dies after being sat on, breaks neck