Five beauty must haves from your kitchen

Men only: 20 clear signs your woman is cheating on you 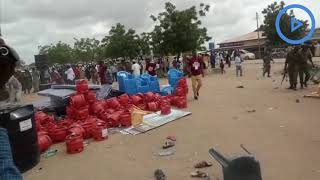 Police have arrested a man suspected to have lobbed teargas canister at a crowd during the Inua Mama rally in Wajir County on Friday.

The several people sustained minor injuries as the teargas canister went off near the dais at Qorahay grounds.

Wajir County Police Commander Stephen Ng'etich said the suspect, who hails from Kibera, Nairobi, was arrested as he tried to flee during the chaos.

“We arrested a man believed to have lobbed the teargas canister at the crowd during Inua Mama event as he tried to escape,” said Mr Ng'etich.

Mr Ng'etich said the police are pursuing three other suspects in relation to the incident.

He said that upon interrogation, it was discovered four suspects had flown to Wajir from Nairobi in a Jetways plane.

He added that a taxi driver is also in police custody and is helping with investigations.

The incident attracted harsh criticism from a section of women legislators who vowed to pursue justice and ensure the perpetrators are brought to book.

Mothers with virus advised to breastfeed

Good news for Kenya on HIV/Aids

Mummy and Me! Photos of Zari and Pinto that will melt your heart

8 quotes from Aiden O'Brien on his Sunderland move

Ijumaa Kareem! How to slay your Friday like Jamila Mohamed

Why you could soon say bye to your favourite joint, drink