How to make your budget work for you 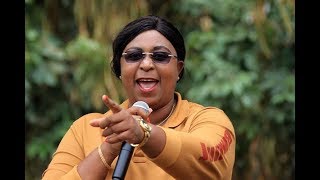 Malindi MP Aisha Jumwa has been arrested alongside four others after one person was shot dead when they allegedly stormed the home of an ODM candidate on Tuesday.

Ms Jumwa was arrested at around 3am Wednesday when police raided her home having camped at her gate since 10pm after she refused to grant them access.

Ganda Ward ODM candidate Ruben Katana's uncle was shot dead in the chaos that ensued after the Malindi MP and her team stormed his home where he was meeting poll agents ahead of the by-election on Thursday.

Speaking to Nation before her arrest, Ms Jumwa said she went to the home to protest against what she said was an illegal meeting after Malindi Sub-County police commander Philip Wambugu delayed to act on calls to disperse the gathering.

"Campaigns ended on Monday at 6pm as per the law and once I received reports that the ODM candidate was holding an illegal meeting, I decided to go and protest why police were not doing their duty," said the combative MP.

She denied allegations that she shot a person dead, saying the guns were fired after she had already left.

"I am not armed, I do not possess a gun or shown any interest to apply for a firearm licence. Therefore, the people who organised the illegal meeting should take responsibility for the death," she said.

The Ganda Ward representative seat fell vacant after the nullification of the election of Abdul Omar, an independent candidate in the mini-poll supported by Ms Jumwa.

The vocal legislator fell out with her ODM party after she pledged to support Deputy President William Ruto's 2022 presidential bid.

Ms Jumwa said she had called Mr Wambugu to inform him of the said meeting and that the police commander promised to send officers to the home.

The MP claims the police failed to disperse the meeting when they arrived there.

"One could ask what type of meeting they were having with over 300 youths, attended by Kilifi North MP Owen Baya, Kilifi Woman Representative Getrude Mbeyu, Magarini MP Michael Kingi, among others leaders," she said.

Upon her arrival at the scene, Ms Jumwa said the youths at the meeting became rowdy and began shouting and throwing stones, forcing police to fire shots into the air and lobe teargas canisters to disperse them.

"I had already left when that person was shot," she said, adding that "In fact I was annoyed when one of the ODM supporters claimed they have already put police in their pockets and there is nothing they can do when I tried to protest against the illegal gathering."

On their part, the ODM team lead by Magarini MP Michael Kingi and Kakuyuni MCA Nixon Muramba have denied holding a campaign rally, saying they were meeting election agents for planning ahead of Thursday's by-election.

Mr Kingi claimed "Ms Jumwa together with her team of goons allegedly shot directly at an innocent man while targeting the candidate."

He accused Mr Wambugu of failing to act.

Ms Jumwa is being held at the KPA police station in Mombasa.

Why Ruto's 2022 campaigns have gone silent

Kagwe asks Gusii to back their 'son'

ODM accuses Kalonzo of staging a coup in Jubilee

The era of political assassinations

Why bid to oust Ngilu failed

Beautiful beach taken by a drone

Cloudly day at the beach

Coronavirus: Important reason why you shouldn't wear a face mask with a valve