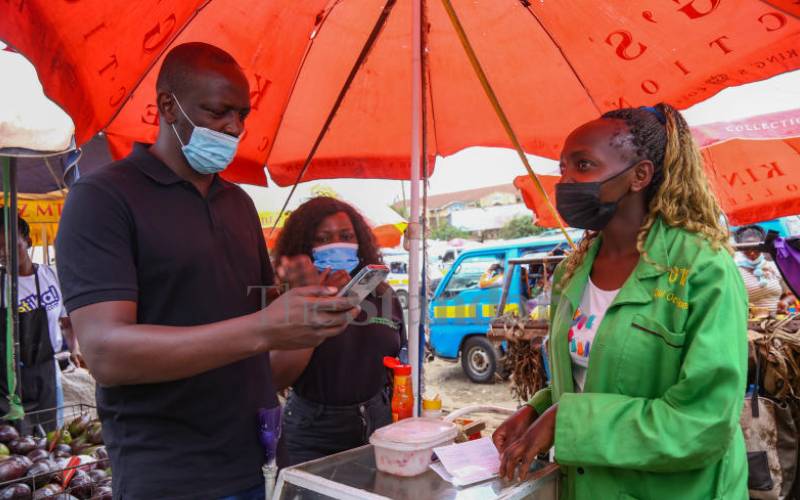 Safaricom plans to extend its overdraft facility, Fuliza, to businesses in a move that looks set to increase the daily lending for the product beyond the current Sh1.34 billion.

The telco says it has applied to the regulator and is awaiting approval before rolling out Fuliza for business in what will be an improvement on the current product, which is only open to individual subscribers registered as M-Pesa users.

M-Pesa Africa Managing Director Sitoyo Lopokoiyit said in a recent call with investors and financial analysts that Fuliza for business is among the products Safaricom is seeking regulatory nod for, including a phone-based wealth management product named Mali.

Fuliza for business will see Safaricom tap into over 400,000 enterprises currently using its payment service Lipa na M-Pesa as it sees an opportunity to offer the overdraft facility for working capital needs such as boosting stock and paying rent and utilities.

“This is part of what we are awaiting regulatory approval for. So it is something that we are really keenly looking at, given we have over 400,000 businesses that use Lipa na M-Pesa,” said Mr Lopokoiyit.

Safaricom did not disclose which regulator it is seeking approval from but last year, the company said it had reached out to the Capital Markets Authority, Insurance Regulatory Authority and Central Bank of Kenya (CBK) for clearance of unit trust, insurance and savings products.

Fuliza for business is likely to support transactions such as Lipa na M-Pesa, buy goods and send money, meaning that businesses with liquidity strain will be able to tap into the product to keep going.

The product looks set to rival products offered by digital lenders and banks to micro, small and medium-sized enterprises, many of which survive on short-term loans.

Lipa na M-Pesa gained traction last year at the peak of Covid-19 as a waiver on charges and a switch to digital transactions rose as people avoided handling cash for fear of contracting the virus.

The service enables merchants to accept cashless payments for goods and services, while Safaricom earns commission from the transacted values.

The telco sees the increased usage of digital payments by businesses as an opportunity to target them through new products such as Fuliza.

It is not clear if Safaricom will price the product the same way as Fuliza for individuals, where the fee starts from Sh2.40 per day for a Sh100 overdraft and goes up to Sh36 per day for borrowing above Sh2,500.

The planned launch of Fuliza for business follows the telco reporting that users had borrowed Sh242.6 billion in the six months to September, up from Sh149.4 billion in a similar period last year.

The jump in the overdraft was on the back of 700,000 new users registered during the period to take total users to 1.7 million.

This means users were borrowing Sh1.34 billion daily on average from the service that was introduced in 2019.

Fuliza has become popular among Kenyans seeking to meet essential or emergency needs such as shopping, rent and supporting friends and family when there is no sufficient money in their M-Pesa wallet.

Currently, the average ticket size is Sh375.80 but extending the service to businesses will increase the amount since personal spending is generally lower than that of businesses. Safaricom will also see increased revenue.

Fuliza for business may also lift its profile from just a product that allows borrowing for consumption to one that provides credit for investment.

Small businesses have generally struggled to access credit due to high default rates, but the current model of Fuliza will shield Safaricom from defaults since the debt is settled instantly when the customer’s wallet receives money.

Fuliza is offered in partnership with KCB and NCBA banks and has a repayment rate of 99 per cent—meaning only Sh1 out of Sh100 overdraft falls into default.

Safaricom introduced M-Pesa for business till—an enhancement of Lipa na M-Pesa buy goods till—enabling business owners to collect payments and use the money to make other transactions through the till.

This will make it easier for Safaricom to deduct money from these tills to settle outstanding short-term borrowings.

M-Pesa has been a catalyst for Kenya’s financial inclusion since its launch in 2007 by founding chief executive Michael Joseph.

It is now evolving into a payment lifestyle brand through a super app that gives customers a one-stop shop for different financial services.

Safaricom in June last year launched a Lipa na M-Pesa business app for more than 170,000 merchants, allowing them to access real-time statements and track their business performance on the go.

This was followed up by Pochi la Biashara (business wallet) in October last year, enabling owners of small businesses to separate their M-Pesa wallets from their business transactions.

Meanwhile, Safaricom said it is also in talks with CBK over possible reinstatement of charges for transactions between banks and M-Pesa. This will lift its earnings further.

Chief Finance Officer Dilip Pal said there has been strong traction between M-Pesa and bank transactions following lifting of charges last year when Covid-19 set in.

Mr Pal, however, hinted at discounted charges given that free transfers have revved up the volume of transactions.

"When we do finalise with the regulator, we will be able to relook at the tariffs with regard to M-Pesa-to-bank and bank-to-M-Pesa transactions," he said.