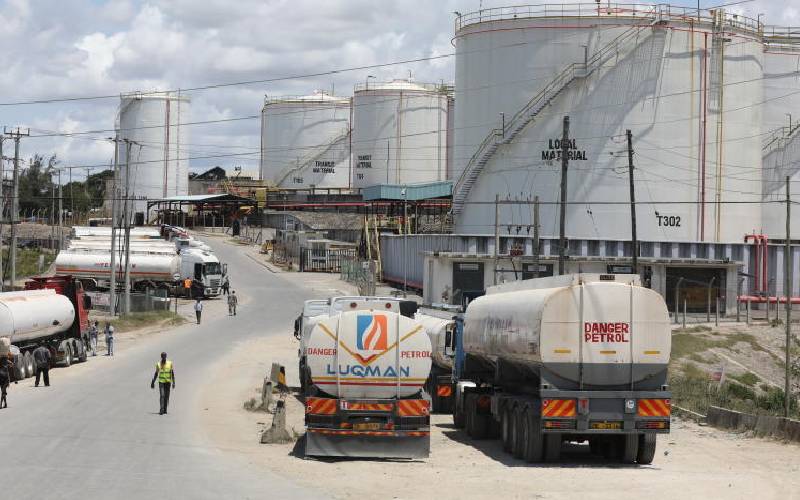 The cost of petroleum products could go down slightly after the government reduced fuel handling and storage fees.

This is after the regulator, the Energy and Petroleum Regulatory (Epra) lowered levies charged by the oil terminals that enable ships to offload the cargo.

It has also lowered the charges paid to store the fuel immediately after discharge from the vessels - referred to as primary storage.

This is in comparison to a combined jetty handling and a primary storage fee of Sh559 ($5.18) per cubic metre set for the 2020/21 tariff control period.

The fee applies to the Kipevu Oil Terminal, a jetty that enables large vessels to discharge into the Kipevu storage facility.

The costs will apply to Kenya Petroleum Refinery Ltd which has had some of its tanks refurbished to handle imported refined petroleum products.

It is now run by the Kenya Pipeline Company as well as the privately run VTTI.

“Notice is given pursuant to Section 11 (b) of the Energy Act, that Epra has reviewed and approved the applicable jetty handling and primary storage tariff for the tariff control period 2021/22-2023/24,” said the authority in a gazette notice yesterday.

The Energy Act in Section 11 mandates Epra to set and periodically review tariffs and other charges for common user petroleum facilities including jetties, storage tanks and pipelines.

“The effective date of the above set of tariffs is August 1, 2021, and subsequent adjustments for the next tariff control periods will be July 1 of each year,” said Epra.

The lower handling and storage levies could mean a reprieve albeit a slight one for Kenyans, who are currently grappling with high fuel prices that are central in driving up the cost of living.

Petroleum products are retailing at near-record highs across the country following the increase in the cost of crude oil in the international markets.

A high tax regime has also been blamed for the high cost of fuel in the country, with taxes and levies accounting for 45.8 per cent of the retail price of super petrol in Nairobi.

The government has in the recent past tried to stabilise the price of fuel by retaining the cost of diesel and kerosene at the same levels as in March while that of petrol has stayed at the same level since July.

This has been through cutting the margins for oil marketing companies who are then compensated later.