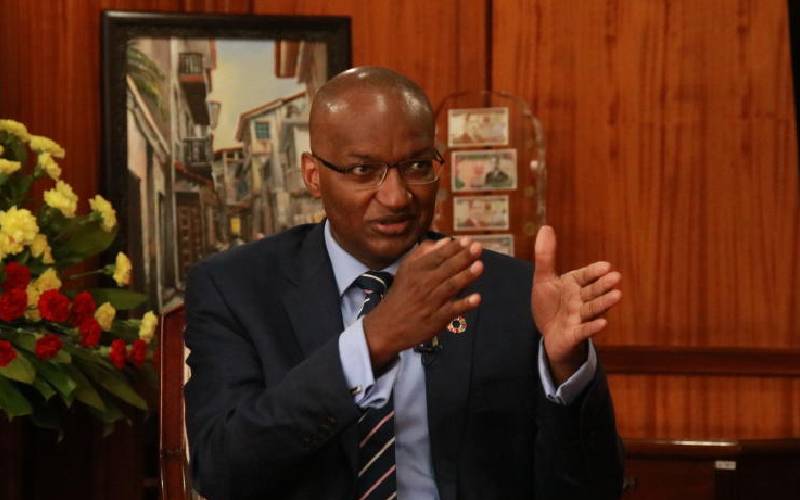 The Central Bank of Kenya (CBK) has warned that the country may default on its debt in the next two years if the current rate of borrowing is left unchecked.

CBK Governor Patrick Njoroge (pictured) told the Senate Committee on Finance and Budget that Parliament has a key role to play in ensuring the government does not take on new debt even as past obligations fall due.

“It (public debt) really worries me and we have been beating this drum reminding you as legislators and the population and other elements of the Executive that we are running out of space,” he said.

Dr Njoroge told the committee that the existing policies are adequate to cap excessive government borrowing if applied aggressively.

“Kenya has never defaulted even one shilling on its public debt since 1963 and this is not the case today,” he said. “But we have to take specific measures today to turn this ship and not to wait until the debt comes crashing.”

Kenya is one step away from being categorised as a candidate for default, according to a debt sustainability analysis done by the International Monetary Fund (IMF) and World Bank.

So bad was the debt situation that country was forced to take a six-month loan repayment holiday from some of its bilateral lenders.

The moratorium, arranged under an initiative by G-20 - a group of wealthy nations - saw the country defer payment of at least Sh80 billion from January to June this year.

According to data from the National Treasury, taxpayers are on the hook for Sh1 trillion in debt repayments in the 2021/2022 financial year of which Sh537 billion will go towards interest payments.

This is more than 90 per cent of the allocation in the Consolidated Fund - leaving little room to service other obligations such as salaries and pension payments.

Kenya’s stock of public debt stood at Sh7.2 trillion as of December last year - of which Sh3.4 trillion and Sh3.7 trillion is owed to domestic and external lenders respectively.

Njoroge told lawmakers that the move by the government to take on more than Sh1.2 trillion in commercial debt over the past decade has raised the cost of servicing the country’s public debt, piling more pressure on taxpayers.

“In the past budget cycle, we have had what can be termed as abracadabra budgeting, where revenues were inflated and completely unrealistic and allowed us to have huge expenditure,” he explained

“In time the revenues were not coming in and then we had to slam on the brakes but I think the last budget was quite realistic and not just in the context of Covid-19,” he said.

The CBK boss said the government needs to better plan infrastructure projects instead of running several of them at the same time, which later stall and tie up funds.

“It is better to do one road and finish it quickly, than start three or four roads at the same time and finish none and we have several examples of this happening,” he said.

Firms could lose lucrative power deals for breach of contracts

How to find the best work-life balance for self

Techie who founded start-up with Sh3,000