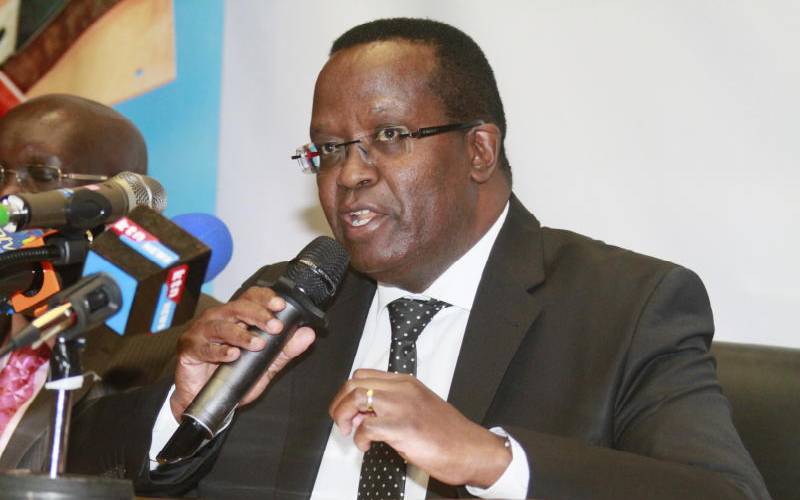 Trouble at the Kenya Power worsened yesterday after the board let go of its Managing Director Bernard Ngugi barely two years into his three-year contract.

The board said Mr Ngugi had resigned, but insiders said his exit is part of the intrigues that have seen several managers at the power distributor sacked over irregularities in the award of tenders.

“On behalf of the board of directors, I take this opportunity to thank Mr Bernard Ngugi for his dedicated service to the company, and wish him all the best in his future endevours,” said Kenya Power Chairperson Vivienne Yeda.

Another source said Ngugi received a poor evaluation rating from the majority of the new Board members who were not in good terms with him.

“This was an opportunity for the Board to show him the exit door during the renewal of his three-year term,” explained the source.

His exit did not appear to have a significant impact on the firm’s share price at the Nairobi Securities Exchange (NSE) yesterday, closing the day at Sh1.40, up from Sh1.38 on Tuesday.

Ngugi, whose term was to end in October next year, has since been replaced by Rosemary Oduor on an interim basis.

Oduor was until her appointment the general manager, commercial services and sales.

Having survived a 2018 purge on several senior managers, Ngugi’s exit is said to have caught many insiders by surprise.

In 2018, when most senior managers were being kicked out following investigations into the Sh4.5 billion scandal on transformer tenders, Ngugi, who was then the procurement manager, along with his finance colleague had been sent on compulsory leave.

This was after President Uhuru Kenyatta ordered all procurement and finance managers of ministries and State corporations to step aside.

As a result, the then acting procurement manager was sacrificed. His return saw him given the high seat. But yesterday, his term was cut short as the boardroom wrangles at the loss-making power utility were intensified by an impending restructuring driven by the International Monetary Fund (IMF).

Kenya Power, which is technically insolvent as its short-term liabilities exceed its short-term assets, has for long been propped by the National Treasury even though it is a private company listed at the Nairobi Securities Exchange (NSE). The government has a significant stake in the country’s sole distributor of electricity.

Insiders said the 2018 Sh4.5 billion transformer scandal, which saw his predecessors dragged to court, might have come back to haunt Ngugi.

Others reckoned he could have been a sacrificial lamb by the board, keen to show the National Treasury that is putting its house in order.

In 2018, the then MD Ken Tarus was among several top managers who were suspended and later charged with corruption over a Sh4.5 billion scandal that involved the irregular award of tenders for the supply of transformers.

The investigation by the Directorate of Criminal Investigations also touched Tarus’ predecessor Ben Chumo. The power firm has struggled financially after being hit by scandals that saw a high turnover of top managers.

KPLC reported a net loss of Sh939 million in the year to June 2020, from a profit of Sh262 million the previous year, due to power leakages, declining revenues and adverse effects of Covid-19.

Ngugi leaves the power distributor after more than a 32-year stint and was one of only three top managers who survived 2019’s corruption clean-up.

Jared Othieno acted as MD for less than a year before Ngugi was appointed to the position. Othieno has since joined Geothermal Development Company as MD.

Kenya Power has also been facing a backlash from its customers, with 2018’s complaints of backdated charges and alleged overbilling among consumers among the issues that the new boss will have to deal with. One of the problems at the utility firm has been its failure to collect revenue due to failure to read power meters.

Kenya Power’s cost-cutting measure that saw meter-reading personnel, most of whom are casuals but unionised, lose their over-time payment, has seen most of them sabotage the company. It is the same with the personnel who are expected to reconnect power in case of an outage.

“Without accurate reading of meters, you will not collect enough revenues,” said a source at the firm.

The national government is also accused of pushing KPLC into its current mess, with the National Treasury not compensating KPLC close to Sh86 billion for the last mile project, a World Bank-funded power project.