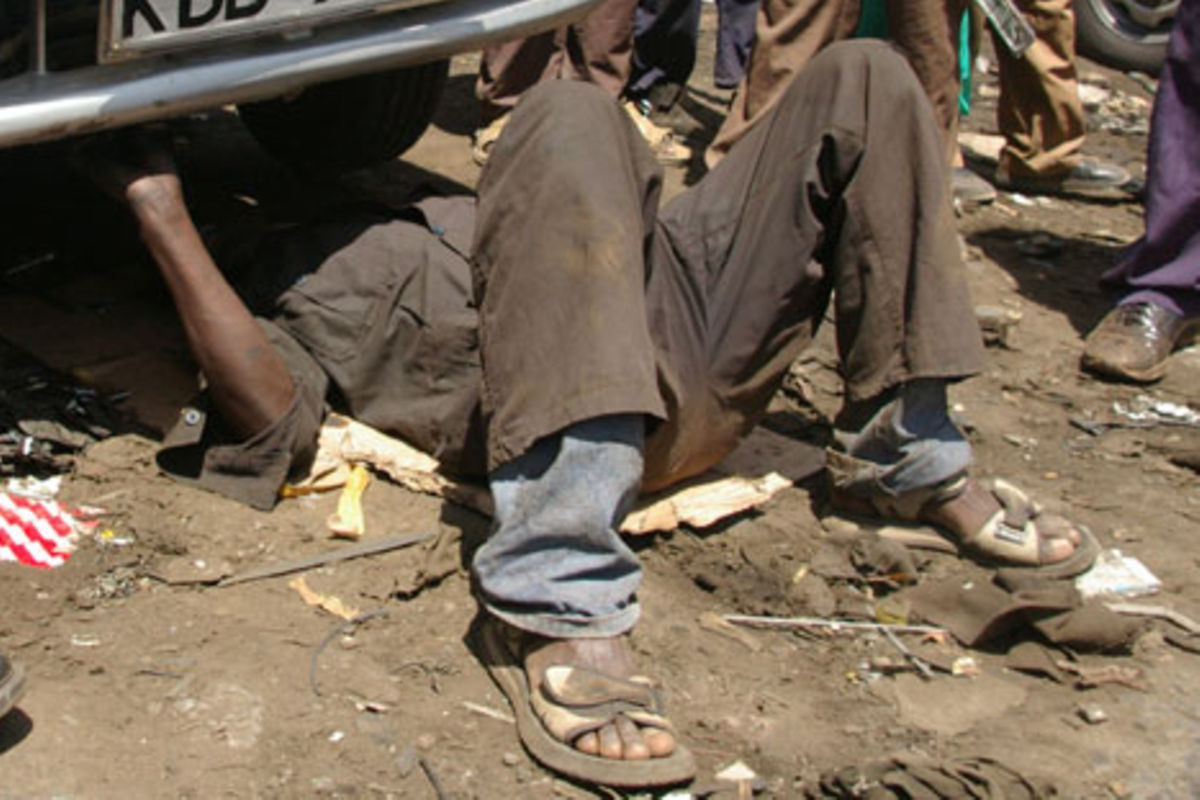 Catcalling is widely associated with sexual harassment but in Machakos town, it is a tool in a bag of tricks used by a gang of con mechanics.

Motorists driving through Glogon, a busy section of the town on the Machakos-Kitui road set aside for jua kali artisans, have to contend with catcalling and waving from the cons from the roadside.

Draped in oily overalls and constantly looking over their shoulders, the youthful "mechanics" try to get the attention of random motorists while animatedly pointing to a part of the vehicle.

They work either in pairs or in teams of three.

Unsuspecting motorists who fall for the tricks end up paying an arm and a leg for air as the mechanics remove parts from vehicles and return them despite charging for new ones.

The Nation.Africa has established that the cons work in cahoots with selected dealers in motor vehicle spares, and, safe in the security of their numbers, they exude an air of impunity.

An unknown number of motorists, especially women, have fallen prey to the conmen.

A handful of their victims report the incidents to the police while many elect to publish their experiences on social media.

The accounts are more or less identical. An unsuspecting motorist responds to catcalling and stops the vehicle.

Two or three youthful men inform the motorist that a wheel is loose. They quickly proceed to fix it even before the motorist agrees to the deal.

While at it, the con mechanics discover other “worn out” parts and recommend they be replaced urgently to avert a bigger problem.

This is what befell Mary Kyalo, a teacher, when she was posted to a local school a year ago.

“Three friendly looking men pointed at one of my front wheels saying it was loose and needed to be fixed. They offered to fix the wheel at Sh200. Once underneath the car, they ‘discovered’ more problems. ‘The bushings are badly worn out’, they said. They led me to a nearby spares shop that charged Sh4,000 for brand-new bushings,” she said.

“Trouble started when I discovered one of them had spilt oil under the car to create the impression that the car’s engine had been leaking. They asked for Sh9,000 to fix the ‘leak’ and replenish the oil. I raised the alarm, attracting the attention of a friend who was aware of the con artistry, after it dawned on me I was about to be shortchanged.”

No one knows for sure when the con mechanics problem started.

Multiple sources and authorities recall that the problem, an eyesore in the corner of the town that houses some of the highly sought-after mechanics, heightened with the advent of devolution.

“We suspect that the mushrooming of the con mechanics in Glogon has everything to do with the rapid growth of Machakos town. President Daniel arap Moi allocated jua kali artisans some four and a half acres of land at Glogon in 1984,” said Abednego Mwandi, the secretary-general of an association of jua kali artisans in the county.

“The town has since run out of space to accommodate the many new mechanics, forcing them to work by the roadsides. This is how the mechanics attract and breed rogue elements. Authorities should (look into it).”

At the height of the outcry over the fraudulent activities, Governor Alfred Mutua’s administration in 2019 gave roadside mechanics a yard on one side of the Iveti hills.

The thinking was simple: getting mechanics from the roadsides and registering them would make it easier to weed out bad elements from genuine mechanics.

Genuine mechanics named the new yard Haki Juakali Mechanics to draw a moral compass and distinguish themselves from the cons.

The problem has defied the interventions.

“Some of the bad mechanics own stalls in our yard. They report in the morning, then leave for their work station near the bus station. They are a bunch of rotten apples that have been giving the mechanics industry in Machakos a bad name,” said Haki Juakali Mechanics chairman Henry Musyoki.

“They have devised a new way of eating our lunch - lying to their targets that the government had relocated the rogue elements and that therefore they are the real deal.”

But he laments that the victims of their trickery seldom report the incidents.

Police round up the rogue mechanics once in a while in response to an outcry but none has been charged as motorists continue gnashing their teeth.