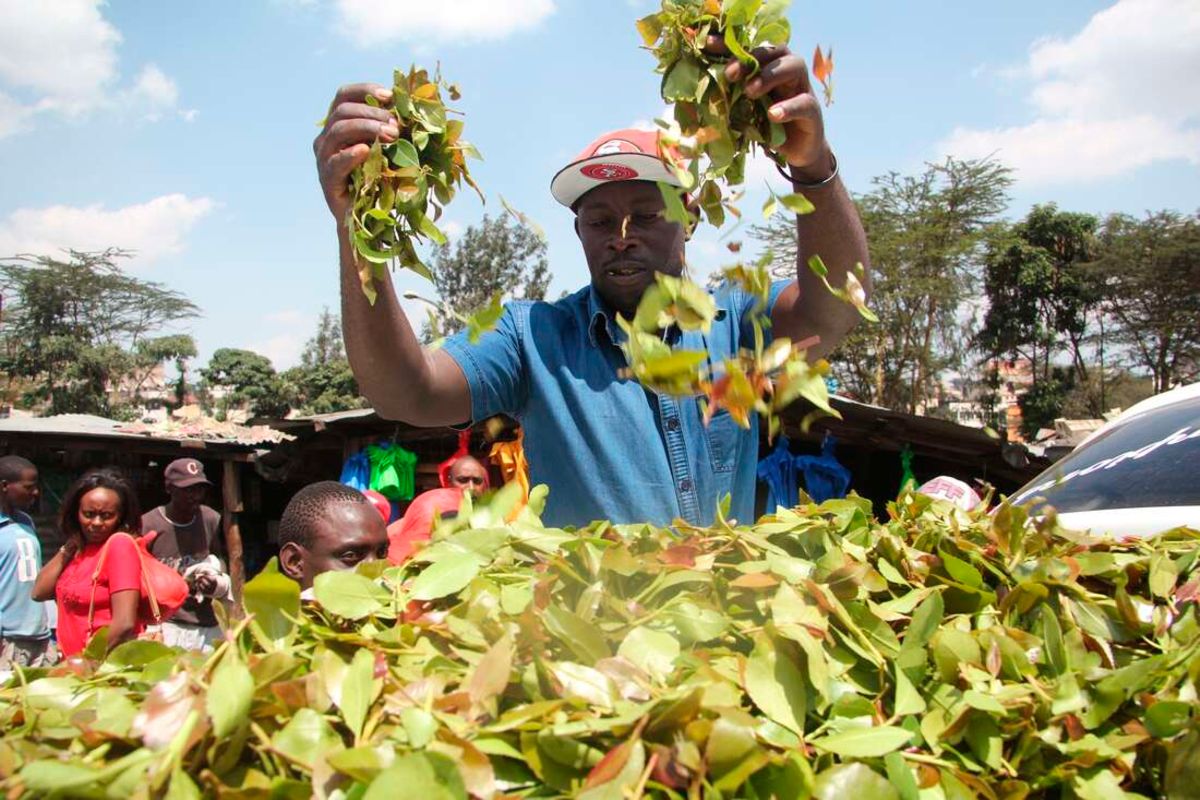 Since export of the produce to Somalia was banned a year ago, earnings from the crop have dwindled to a level he would never have imagined.

For Mr Muturia, like for the other farmers in miraa growing zones in Igembe and Tigania, the pain of having to harvest the crop only to throw it away is twisting the knife on his back.

Besides lack of market for the produce, farmers are also incurring losses since the twigs must be harvested to ensure they don’t overgrow and spoil the tree branches.

“We’ve to hire people to harvest although most of [the crop] is thrown away,” Mr Muturia says.

This, he says, “is because the trees are like tea bushes, which must be plucked and pruned, whether it’s delivered to the factory or not. This ensures the trees remain productive.”

With the ban on miraa export to Somalia, the main market, farmers have been left with tonnes of the produce going to waste and losses exceeding Sh16 million a day, according to data compiled by the Nyambene Miraa Traders Association (Nyamita).

When the ban was imposed due to diplomatic differences between the two countries, farmers thought the matter would be resolved swiftly.

“But things have worsened and the future of this crop is now uncertain,” Mr Muturia said.

In recent days, Kenya and Somalia have taken steps to normalise relations, but there is no word yet on the miraa ban. For a crop whose farming, trade and marketing is controlled by, among other factors, geopolitics, it’s the same story of anguish.

They’re now accusing the government of doing little to save them from losses.

Considered a mild stimulant but categorised by the National Authority for Campaign Against Drug Abuse as a drug, the crop, whose trade is valued at about Sh40 billion a year, lacks proper marketing and is prone to local and regional political manipulation.  Although the World Health Organization classified miraa as a drug of abuse in 1980, it indicated that khat has less effect than tobacco or alcohol.

However, the plant is at the centre of regional and global scrutiny and bad publicity.

Before the latest ban, sustained pressure from activists starting 2013 led to khat being outlawed in the US, the United Kingdom, the Netherlands and several other European countries by 2016.

There were claims that proceeds from khat were being used in money laundering and drug trafficking. Farmers now rely on the local market, which is not as lucrative as Somali.

Muringene, Igembe Central, where a modern market is coming up, the excitement that used to greet visitors is no more.

Mr Martin Miriti, who we find selling a huge bunch of the produce, said prices have plummeted to their lowest.

“In the good days, I’d sell a kilo for Sh500 here and it would fetch over Sh1,000 in Nairobi. But now I sell the same quantity at Sh50 locally because there is no market. Everybody is jostling for the same customers.”

With dwindling fortunes in the sub-sector, farmers are now turning to growing avocado to supplement their incomes.

Mr Jediel Maingi, a forestry expert who has done extensive research on miraa says, the main challenge facing the crop is that trade in the produce is informal.  “Trade in miraa is lucrative, but it’s amorphous and lacks a basic structure from which the business should be conducted.”

In Yemen where khat is also grown, it’s regarded as a vital crop, whose trade is formal and occupies a strategic place in the nation’s agricultural ventures, Mr Muturia said.

Standards for the crop

With potential markets in several African countries where the stimulant is legal, including Uganda, Egypt, Democratic Republic of Congo, Rwanda, Burundi, Malawi, Mozambique and Angola, there should be concerted efforts to market the crop there.

He, however, said there’s hope of Kenya Bureau of Standards developing standards for the crop, which would be used in its sale both locally and internationally.

Nyamita Chairman Kimathi Munjuri praised the development but added, government should prevail on Nacada to declassify miraa as a drug.