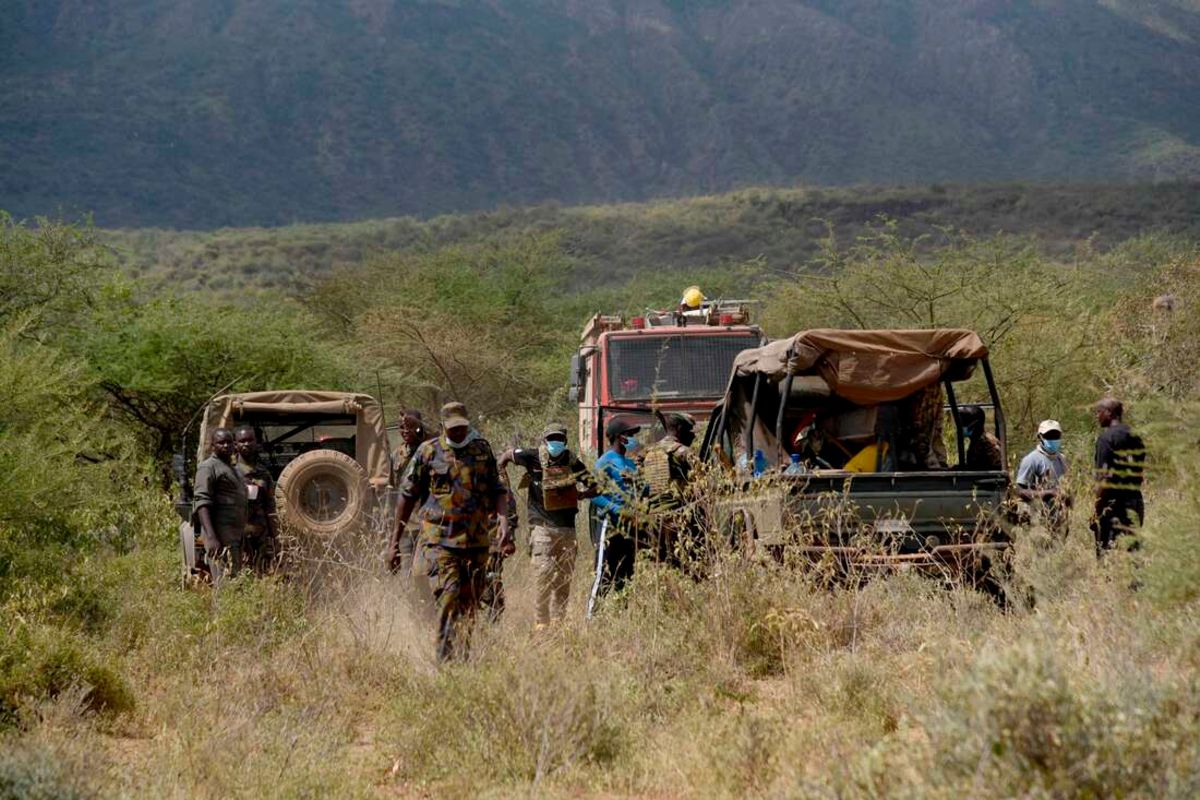 The mangled wreckage of a helicopter and charred bodies strewn in a thicket in Ol Tepesi in Kajiado West were all that remained after a routine military exercise ended in a tragic crash on Thursday.

Ten Kenya Defence Forces (KDF) soldiers are said to have lost their lives, while 13 were injured early yesterday morning.

By late Thursday evening, KDF was yet to confirm the number of casualties.

“Sadly, we have lost 10 soldiers while 13 have been taken to hospital,” said Kajiado West Deputy County Commissioner Muranga Morakwa.

What is known, however, is that around 8.20am, the Kenya Air Force (KAF) Russian-made Mi171E helicopter crossed from Kisamis over Olorogai hill on its way to Oltinka, a dense thicket where temperatures get extremely high during the day.

On board were 23 KAF soldiers including two pilots and their squad leader, according to an official military statement. The sky was not very clear. But the helicopter had flown past the biggest obstacle — Olorogai hill.

Everything was fine until the final descent when witnesses say the chopper, instead of landing, circled above the ground for several minutes.

Others said they saw the helicopter flying zigzag from the time it flew over Oltinka shopping centre.

“The helicopter looked like it was flying towards Eremit town, then it made a turn back to Olorogai. On reaching near the hill, it made another turn. Then it hovered in one area as if it was going to land before flying again towards Olorogai,” another witness, Mr Moses Saitoti, recounted.

As the aircraft hovered overhead, the soldiers scrambled to disembark using a thick rope that was lowered to the ground.

This scramble for safety went on for about 20 minutes. Had the chopper stayed above a little longer, most of the soldiers could have been saved. It did not. Instead, it suddenly crashed to the ground and burst into flames.

The ball of fire was so big that the soldiers who dropped to safety found it hard to pull out colleagues who were stuck inside.

Worse, the ammunition which the soldiers were carrying cracked under the high temperature, creating miniature explosions that made it even more difficult to save those trapped.
Engulfed in fire

Mr Joel Shapara, 24, was among the first witnesses to arrive at the crash scene some minutes after 8am. He said they could not try any rescue as the plane was already engulfed in fire.

“It was hard to access the aircraft. I witnessed death first-hand. We helped some of the survivors to the main road before they were ferried to private hospitals in Kiserian town,” Mr Shapara said.

“After the crash we rushed to the scene to help but we found soldiers who had surrounded the plane. They asked us to stay away from the scene because we did not have bullet proof clothing and could get injured,” Mr Saitoti said.

A few minutes later, he added, they started hearing what sounded like gun fire from the plane.

A motorist who said he helped ferry two survivors to Kiserian private clinic in his Toyota Probox said they were in great pain.

Luckily, dozens of Ministry of Health officials were on a sensitisation mission at Ol Tepesi for the ongoing measles vaccination. They immediately stopped what they were doing and rushed to the scene to assist in the rescue.

KDF released the first information on the crash at 10.13am, saying, the plane had crash-landed ‘around 0900hrs’.

It said, “an Mi 17E Air Force helicopter on a training mission crash-landed at the Ol Tepesi area in Ngong, Kajiado County.”

By this time, a military chopper that had been dispatched from Moi Air Base to evacuate the injured had landed at Wilson Airport.

Those on board were immediately put on waiting ambulances and driven to the Forces Memorial Hospital.

At the crash scene, 67km away, a recovery mission for bodies was underway. Two more choppers and military personnel had arrived. KDF later confirmed that the helicopter had crashed.

“All passengers on board the KAF helicopter Mi 181E, which crashed at Ol Tepesi in Kajiado County today are accounted for and have been moved to safety,” said KDF spokesperson Zipporah Kioko. Regrettably, she added, “we suffered fatalities. The process of communicating with the families to relay the information and KDF condolences [is] underway.”

The plane was virtually reduced to ashes, save for its broken propellers and part of the engine.
However, as of yesterday, it was still deemed to be too early to get any clues as to what could have caused the crash apart from witness statements.