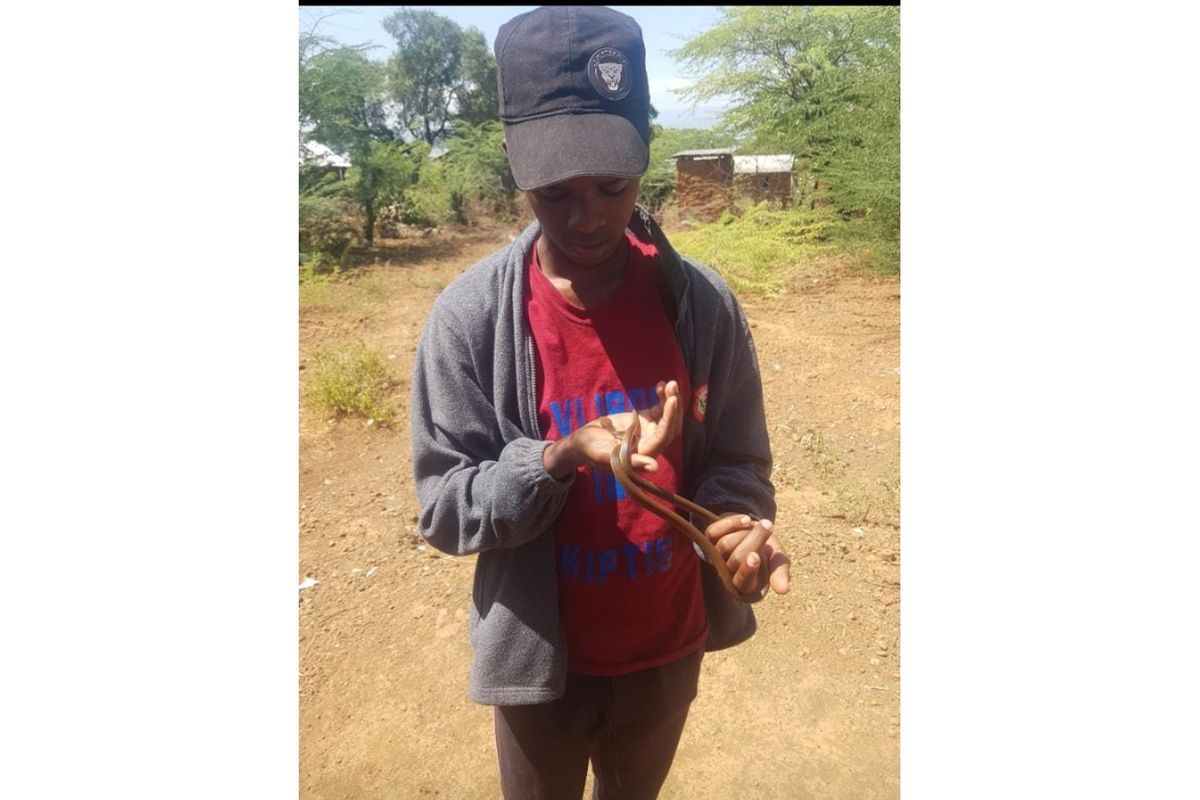 Fourteen years ago, seven-year-old Frederick Kimuge ran around with his two cousins catching monitor lizards at their grandfather’s homestead in Baringo. To passers-by, the boys were just playing, but they were on an important assignment — finding food for snakes.

The lizards were delivered to the Lake Baringo reptile park, where his grandfather William Ewei Nakorot worked as a snake handler. He cared for African rock pythons, sand boas, black and green house snakes, tortoises and black mambas.

While he reared rabbits to feed the pythons, he made his grandchildren trap rats and lizards for a few coins. Kimuge would inherit his craft.

When the old man died earlier this year, an African rock python visited his homestead on the day of his funeral, an incident that Kimuge says his grandfather foretold on his deathbed.

Now aged 21, Kimuge says he has captured some of the world’s most dangerous snakes, and that he plans to pursue the craft in future.

“Our family is gifted in handling animals. I have an uncle who can call out animals, and I can sense the presence of a snake wherever I am,” he explains.

He says he has been bitten by lizards countless times, and that before he started saving snakes, he used to kill them.

“I would pick up a snake by its tail, raise it quickly and swing it several times in the air, and drop it suddenly. Because they are fragile, they would lose balance, suffer injuries and die,” Kimuge recalls.

“But I didn’t know some are venomous, and I risked being bitten. When my grandfather found out, he scolded me and warned me to stop. From then on, I’d catch the non-venomous ones and release them to the rivers.”

When he turned over a new leaf, he started championing the safety and well-being of snakes, and when he joined high school, he told his schoolmates to let him know when a snake was intruding and he would take care of it.

He kept his promise, and would dispose of the snakes in rivers near the school or on land far from the school.

The most dangerous experience he’s ever had was an encounter with a black mamba.

“I had the habit of stealing weaver bird eggs from their nests just so I could experiment to see if a hen lying on them would make them hatch,” he says.

“I spotted a big nest with two entrances and stretched my hand towards the nest. As I started to dip my hand, a black mamba’s head swung from the top, missing my hand by an inch.”

He went back, slashed the branch housing the nest and looked for his grandfather, all the while unaware that he was carrying a highly venomous snake. Upon handing over the snake, his grandfather told him what it was.

The old man pressed the snake’s head on the ground with a stick, reached for the head and secured it in a bag. Before he put up his reptile park, he would release the snakes at Lake Baringo.

Even though Kimuge has never been bitten by the slithery reptile, he says his grandfather and one of his cousins have, and though danger is always lurking, he has realised that the craft gives him a sense of deep satisfaction.

He wanted to be a bird ringer when he grew up and enjoys birding, but he now wishes to pursue a course in clinical prevention and management of snake bites.

“I don’t like seeing snakes suffering or being killed. There are many snakes in Baringo, and if we were to kill them every time we came across them, one day they will disappear,” he explains.

When he was a little boy, he would show visitors to specific areas to watch exotic birds.

“I am studying ICT at KCA University, and I am also pursuing a short course at the University of Nairobi about clinical management of snake bites. I have thought about it for a long time, and I want to do it in the long term,” he says.