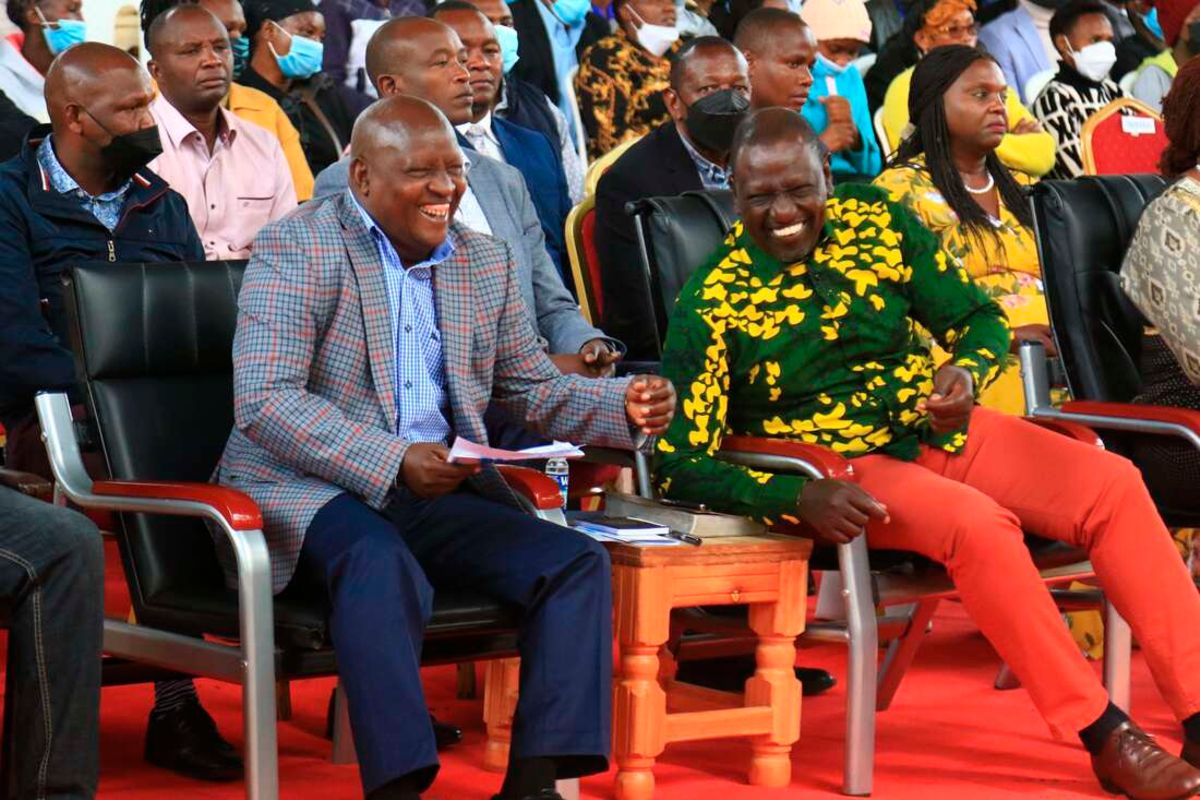 On Sunday, Mr Kahiga spent the better part of the day showering Dr Ruto, saying the second-in-command was the man to watch.

This is the second time the Nyeri County boss is taking a swipe at the Orange Democratic Movement (ODM) leader after accusing him of being too fixated on history.

Barely two weeks ago, Mr Kahiga hit out at Mr Odinga saying Nyeri was not interested in his historical narrative rather what he has to offer the region.

He furthered his onslaught against Mr Odinga and his political tactics.

“Even after I told him he kept going back to history. And I saw the president say that some people are sprinting and we would advise him not to try because he will fall,” the governor said.

DP Ruto was quick to capitalize on the governor’s opposition towards Mr Odinga’s political advances, turning it into an opportunity to poach one of the few governors from the region yet to jump ship from Jubilee.

“Yesterday the governors who were in Jubilee shifted. Kahiga is among the last and he is worried about whom to leave the key to. I have told him to leave the key and join us,” Dr Ruto said during his address in Ihururu, Tetu Constituency.

During the Tetu rally, local MP Gichuhi Mwangi announced he will be jumping ship to UDA, at the invitation of DP Ruto.

“We have spoken with your MP and asked him to join the hustler movement,” Dr Ruto told Tetu constituents at Ihururu.

The MP responded by declaring he would be joining UDA to add onto the list of “over 150 MPs” who have since joined the DP’s camp.

Unlike Mr Mwangu, Mr Kahiga was not committing yet and is leaving things rather cryptic.

“If I leave, will you still support me and if I ask you to accompany me to Nairobi will you come?” he posed to the locals, concluding by telling the DP to make arrangements for him to visit him in Karen.

Even yet, it is still not clear where his loyalty lies as the governor has in the past been seen as a perennial fence-sitter, especially with regards to presidential aspirants.

He has over the last one year held onto the policy that every aspirant is welcome to visit Nyeri and negotiate with the people.

It is this same policy that leaves many guessing with Mr Kahiga appearing to be cozying up to each of them, except Mr Odinga whom he expressed outright rebellion towards.

Barely five months ago when Amani National Coalition (ANC) leader Musalia Mudavadi toured Nyeri, Mr Kahiga held talks with him, at some point even appearing to endorse him.

Like with Ruto, he heaped praises on the ANC leader, particularly his economic agenda, but declined to commit to backing a Musalia presidency.

Mr Kahiga is on his political debut having come into politics as a deputy of former Nyeri Governor Wahome Gakuru.

Mr Kahiga took over reigns as the Nyeri county boss following the death of Mr Gakuru one month into their reign in office.

DP Ruto, who concluded his two-day tour of Nyeri yesterday, will today (Monday) proceed to Laikipia County as he seeks to popularise UDA.