Without a trace: Families' pain as four men 'vanish' after lunch 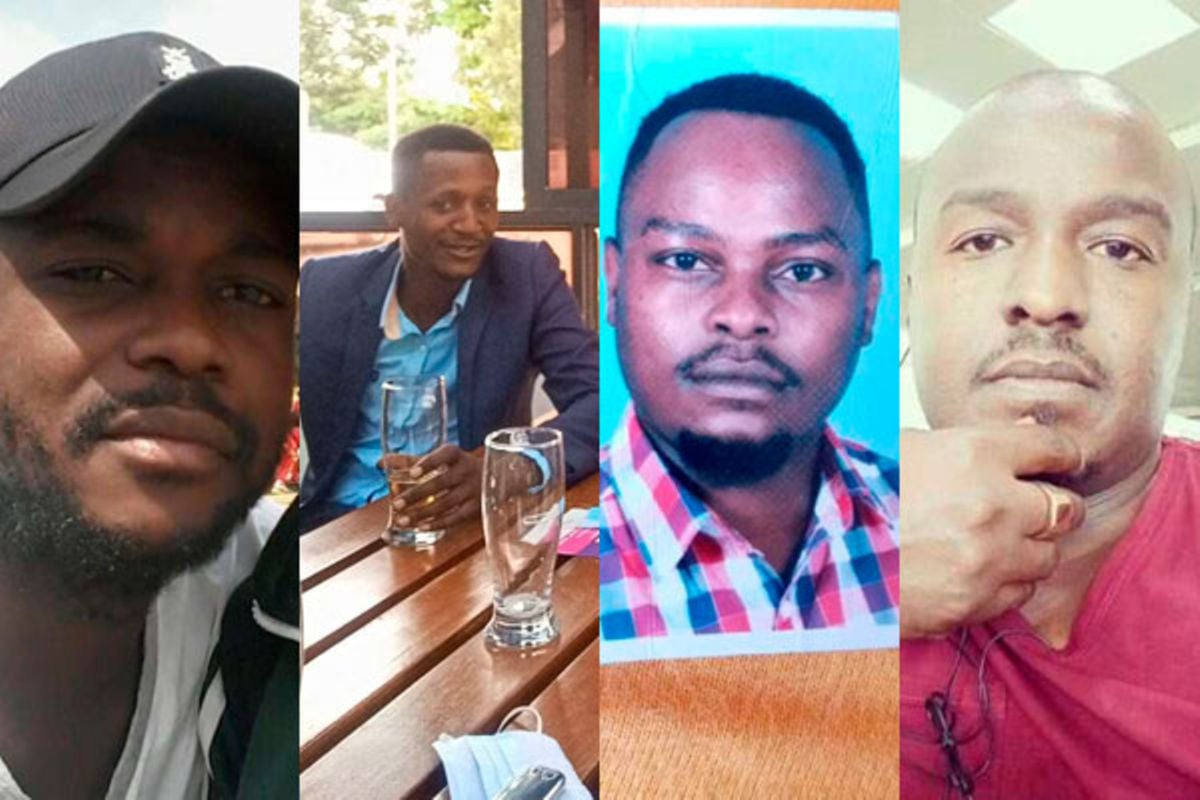 At around 1pm on April 19, four friends drove to a popular club in Kitengela town for lunch.

Their car – a white a white Toyota Mark X – was found abandoned at a parking lot about 500 meters from the club the following day.

Relatives have spent the past week moving between hospitals, morgues and police stations across the metropolis in search of their loved ones.

When the Nation caught up with them near Kitengela Police Station on Sunday, their pain was evident. They stared at the vehicle parked at the station yard as if it held dark secrets about the disappearance of their loved ones.

Oduor’s wife, Catherine Atieno, said the father of two left their Embakasi home at 8am to pick up his friends for a meeting and promised to be back home by evening.

“We spoke at around 1pm and he promised to be back on time for my hospital appointment. By 3pm his phone was off. His friends were also out of reach. I knew something was wrong,” said Ms Atieno.

She said Oduor – who runs a car hire firm and deals in spare parts – had no known enemies.

Anyango’s wife, Monica Wanjiru, said her husband left their Donholm Phase 8 home at around 7am for a meeting with Oduor in town.

The father of one worked in the tourism industry before the pandemic forced him to close his firm. His woes did not end there as his car was later auctioned by a bank.

“He had been struggling financially but he was a hardworking, honest man who made us the first priority. Before he disappeared, he sent me Sh100 and promised to call later. I noticed his phone was off at 4pm,” said Ms Wanjiru.

She claimed a man had called to inform her the four men had been killed.

Imbai’s younger brother, Elvis, said he lost contact with him on Monday afternoon. The brother had promised to send him some cash to repair one of his business vehicles.

“Someone posted on Facebook that a car belonging to one of my brother’s friends had been parked near a club in Kitengela on April 20. When we got there, we found three jackets on the back seat,” said Mr Imbai, whose brother resides in Athi River’s Everest Estate.

He alerted Kitengela police at 3pm and the vehicle was towed to the station at midnight, according to Occurrence Book records.

At Nazra Garden Estate in Kayole, Obuong’s family is also worried about his whereabouts. His mother, Caroline Obuong, said her son had no criminal record.

“He is my first-born son who has been trying his hand at several businesses to earn a living. I want my son whether alive or dead. My whole family is having sleepless nights. Though jobless, the family was supporting him financially,” she said.

Detectives are looking for a person identified as ‘Erico’ on social media, who alleges the four were executed.

“Our only lead is the person on social media who claims the friends were killed. We believe he is the same person who directed family members to where the car had been abandoned,” said the detective.

The club's managers distanced themselves from the matter and it’s not clear if detectives have reviewed CCTV footage at the establishment.

A guard in one of the nearby premises said there was “no commotion” on the day the four disappeared.

Sources claim one of them has a criminal record, is known to be the ring leader of a notorious gang and even spent time at Shimo la Tewa Prison.

Last year, three of his friends disappeared under similar circumstances. Their car was abandoned at Parklands in Nairobi before they vanished.

Isinya Sub-county head of criminal investigations, Jeremiah Ndubai, said the disappearance of the quartet was reported at different stations but would be handled by Kitengela detectives.

“Investigations have been launched ... we are following some leads,” said Mr Ndubai.