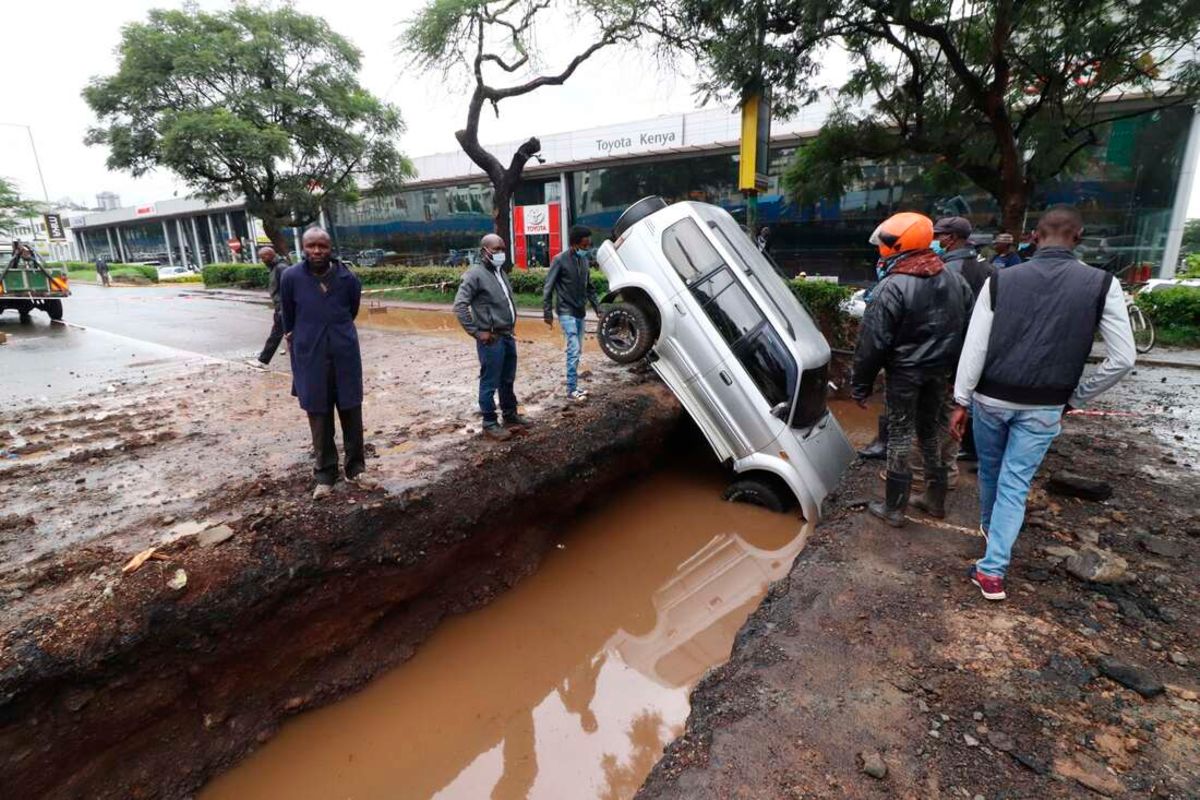 So what will happen to the road beneath the Nairobi Expressway decker? Well, for months now, this has been a question on some Nairobi residents after witnessing how the roads have been ruined during the ongoing construction. From Mombasa Road to Uhuru Highway and Waiyaki Way, the story is the same.

But now we can report that the China Road and Bridge Corporation (CRBC), who are financing and constructing the expressway, will repair the 27km stretch.

Transport Cabinet Secretary James Macharia disclosed this during an interview with nation.africa.

According to the CS, the Sh62 billion budget for the entire project is what will also be used to repair the three roads, which are in deplorable conditions.

The CS also disclosed that one lane will be for the rapid transport buses (BRT) system to ease traffic in Nairobi.

The BRT system is one of the features in the planned Sh62 billion first double-decker road, which will involve building a dedicated lane for large-capacity buses to ease traffic congestion.

The government plans to launch six BRT corridors in Nairobi.

The corridors are expected to hold up to 950 high-capacity buses reducing travel time and cost by up to 70 percent.

“It will create walkways and cycling pads. Going forward, we are making sure that every piece of infrastructure we have provides for pedestrians and also cyclists,” added the CS.

Motorists and commuters who use Mombasa Road spend hours on end due to the ongoing construction of the expressway, which is set to give the city a major facelift.

China Road and Bridge Corporation is working day and night to build the Sh62 billion expressway.

The expressway, which is expected to reduce travel time between Jomo Kenyatta International Airport (JKIA) and Westlands, is expected to be commissioned in April next year, according to Mr Macharia.

“In the meantime, I know there are a lot of inconveniences as people are spending longer hours in traffic but the reason we are constructing the Nairobi Expressway is to solve the traffic jam that was there before. If there was no traffic congestion before there would be no justification to construct the highway. This pain we are having now is very short-term pain," he said.

The road project, which is currently at an advanced stage, will see Kenyans pay a small price for the greater good for the 27km stretch, whose construction will ensure “seamless flow of traffic”, among other economic benefits, according to the CS.

The dual carriageway will have 10 interchanges, including the SGR terminus at JKIA, Eastern Bypass, Southern Bypass and Enterprise Road.

Moja Expressway, a subsidiary of CRBC, will operate the road for 27 years so the company building it can recoup its money through toll fees.

The toll charges will be dollar-based to cushion the Chinese operator from exchange rate losses.

The fees are projected to generate Sh302.5 billion, offering the Chinese firm an annual profit of Sh3.9 billion.

Motorists will have the option of using the expressway to escape the heavy traffic beneath it at a fee or toll charges.

Kenyans will be expected to pay between Sh100 and Sh1,550 in toll charges, depending on the size of the vehicle and the distance covered.

The expressway is a four-lane and six-lane dual carriageway within the existing median of Mombasa Road/Uhuru Highway/Waiyaki Way.

It will also have interchanges - or exits and entry routes - that will act as toll ramps.

The expressway was launched by President Uhuru Kenyatta in October 2019 and was expected to be completed and opened for traffic early next year.

“The Nairobi Expressway is the first Public-Private Partnership (PPP) Road Project in Kenya, meaning that it will not be financed through the exchequer (i.e. neither debt nor GOK funds). The concessionaire, China Roads and Bridge Corporation, is responsible for designing, financing and building the expressway, and will maintain and operate it during the concession period,” he said.