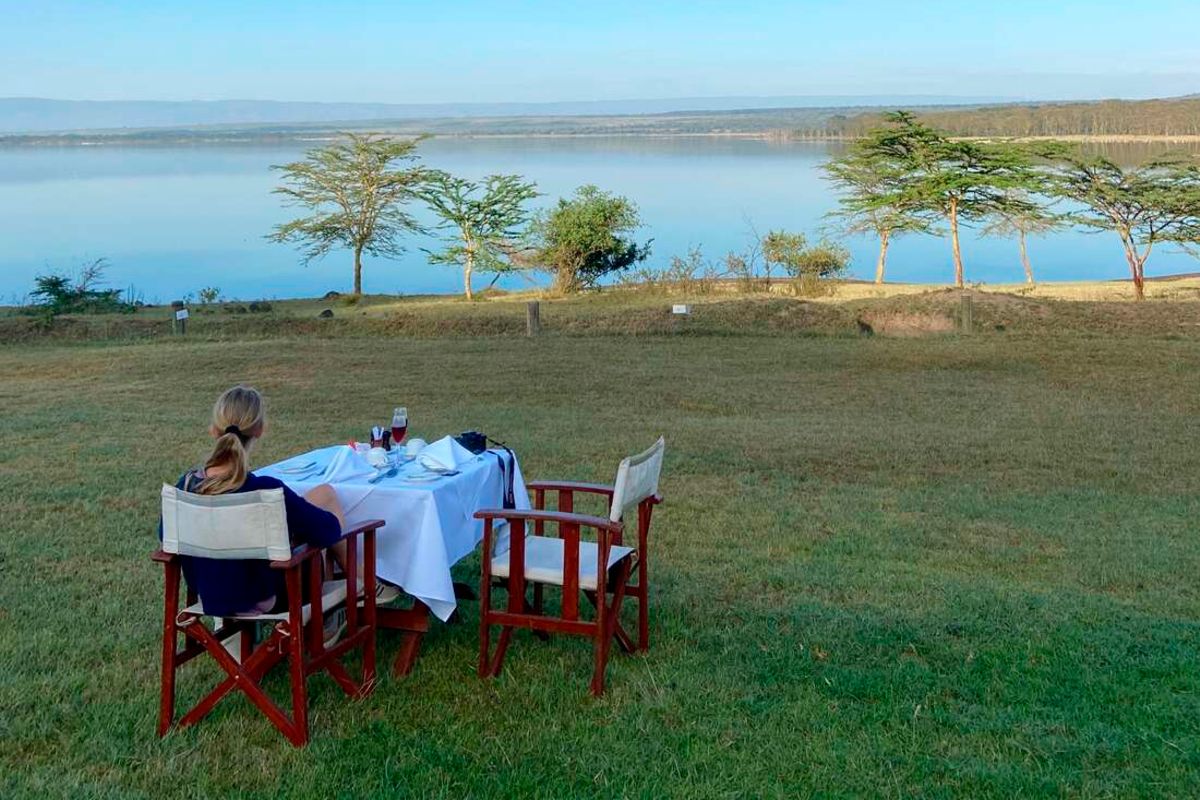 With their distinctive drooping throat pouches and stumpy frames, pelicans aren’t the prettiest of feathered creatures. But on the water, when it’s time to feed, they perform the most graceful synchronised swimming routine. Drifting in a compact group, they drive fish beneath them into the shallows by beating their wings on the surface, and then dive below to scoop them up in unison.

I admired this elegant show of water ballet last Friday afternoon from the verandah of my tent at the Lake Elmenteita Serena Camp. The sky above was darkening but the lake was still mirror calm, disturbed only by the paddling pelicans. On the shore nearby, beyond a grove of sprawling acacias, a herd of zebras ambled over to the waterhole in front of the camp’s central dining tent. My wife and I had only just arrived, but our hectic drive down from Nairobi was already forgotten.

For too long, Lake Elmenteita had simply been a scenic section of our journeys to Nakuru and beyond. But the area deserves far more attention than a fleeting glimpse through a car window. As a crucial foraging site for greater and lesser flamingos, and the only breeding ground in East Africa for great white and pink-backed pelicans, the lake has been listed as a Ramsar and World Heritage Site.

Over 450 species of birds have been recorded in the Soysambu Conservancy alone, which borders around 75 per cent of the lake. Soysambu’s open plains and acacia woodlands also support plenty of wildlife, including a good number of Rothschild’s giraffes, leopards, buffaloes, hyenas, and even a small pride of lions.

At the Serena Camp on the northern shore, an evening shower suddenly shattered the mirror smooth surface of the lake. The rain stopped as we sat down for dinner, prompting all the frogs around camp to burst into song. Trickling water features surround the colonial-styled dining tent and lounge — a design inspired by the long influence of the Delameres in the region.

We woke up at dawn the following morning to get some exercise in before the temperature soared. While my wife, Gabie, did some yoga on the lawn and dashed around the camp’s jogging trail, I attempted a longer run along the ridge outside the conservancy. The views were stunning, and I felt less guilty lazing by the pool for the best part of the day.

In the evening we met up with the camp’s guide, Eric, and clambered into his Land Cruiser for a gamedrive around the conservancy. We headed south skirting the shoreline, occasionally scanning patches of acacia forest for signs of leopard. Eric knew the land’s history and wildlife well, and he was a great spotter, too — somehow noticing three huddled bat-eared foxes on a sparse plain.

As the light faded, we were driven to the top of a cliff above camp for a private sundowner. Edwin — our waiter who had looked after us for most of the trip — welcomed us with cold drinks, crisps and canapés. It was a spectacular setting; long shards of light angled through dark clouds above the Mau Escarpment to the west, and the broken caldera walls of the Sleeping Warrior framed the shimmering lake to the south.

In the morning we were treated again — this time to a lakeside breakfast at the base of the cliff. The pelicans put on another polished performance on the water, as black-winged stilts swooped and squawked above us.

Bellies full, we prepared for our final excursion: A bike ride through the conservancy. This brand new activity at the camp is guided by Edward, who led us along gravel tracks through the acacia forest to the lakeshore. Here, we rested and stood by our bikes for a moment, admiring the view across the still water one last time.

Covid-19 was a reality check for friendships

Rise of the vegan pet: Are you ready?