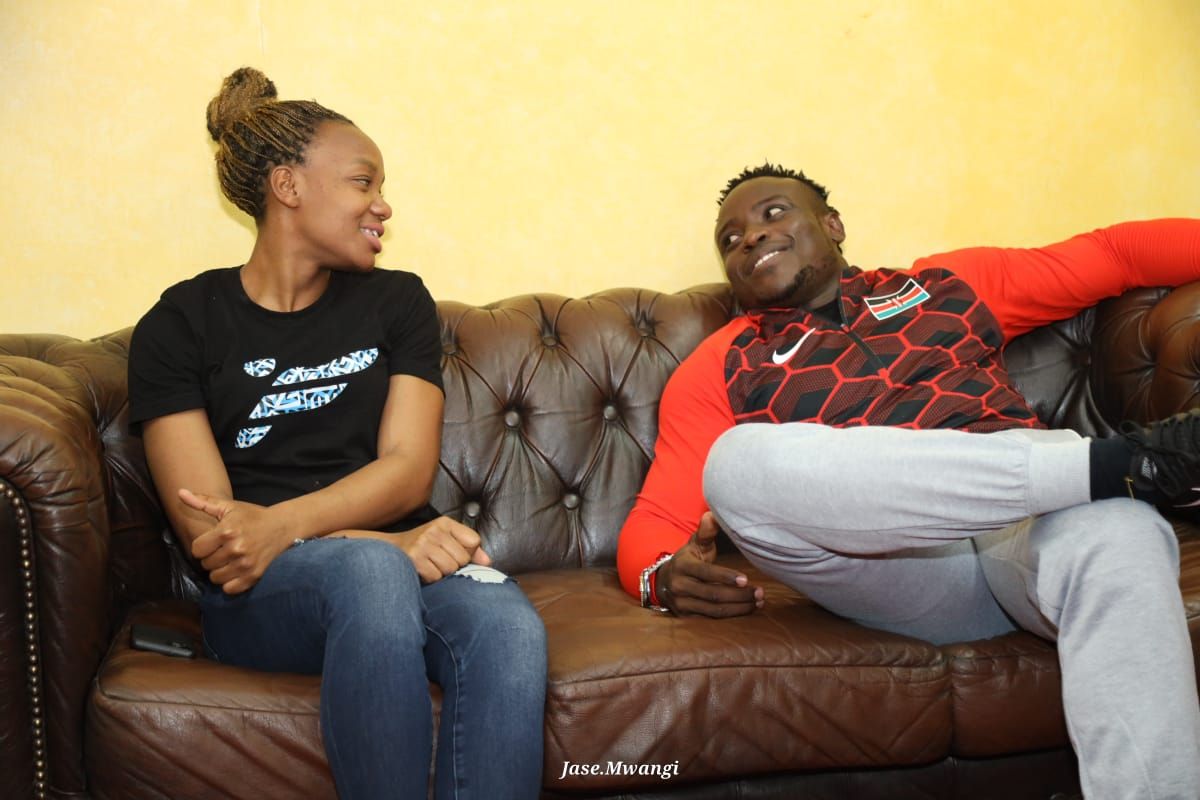 If Kenya had a competition for spouse of the year and the event happened last Wednesday, Laventa Amutavi, sprinter Ferdinand Omanyala’s fiancée, could have taken the trophy.

Kenyans on Twitter, especially men, showered her with praise and made her the yardstick for the rare ‘wife material’ nuance, after her fiancé acknowledged that she paid the elephant’s share of bills when his name barely rang a bell in their minds.

Scrolling through her social media profile gives you an inkling of a happy athlete, whose union with her fiancé was made in heaven. The photos online paint a picture of a nimble Laventa whose ‘Romeo’ does not sweat to lift her up, literally and figuratively.

She is more than just a fiancée to the fastest man in Africa.

Like Omanyala, she is also a sprinter – a passion they both share and is the glue of their love.

The first page of their love story was written in 2016. They were both students, Omanyala at the University of Nairobi and Laventa at Moi. They were participating in Kecoso games in Nakuru.

“I was running for the Kenya Maritime Authority, and he for the Communication Authority. We met at a local eatery over lunch. I was with my friends from school. I knew him but we had never talked,” Laventa tells the Nation.

“He approached me, and after exchanging a few pleasantries, he asked for my number but I threw back the question at him. I asked for his number and I kept it. I neither called nor texted him.”

In December the same year, they met again at the East African Games. This time, Omanyala did not let his future queen slip away as he did when they first met.

“I felt guilty when he asked why I had not reached out. I texted him right there so that he could have my number, and the texting went on and on,” she says.

The two remained good friends until early 2017 when Omanyala shot his shot and asked Laventa if she would like to be his girlfriend.

“I said yes!” she says, giggling. “We’ve been rolling since, here we are.”

Laventa is a social worker by profession.

Her stars aligned when she went for an attachment at Mama Lucy Hospital in 2016. She was living with her cousins. She worked so hard that her colleagues, also attached to Mama Lucy but working with Médecins Sans Frontières (Doctors Without Borders), noticed her.

Her colleagues’ schedule was different from hers and when they went on leave, they recommended her to stand in for them. She did that, diligently. And her pocket fattened for the many stand-ins she had in her five months as an intern.

When Moi University was on a long recess and she was idle, she was recalled to the hospital. She was given a short contract with good pay. By that time, she had moved in with Omanyala. Shortly after, she learnt that she was pregnant with her first son.

“I was so scared and confused and I did not let any of my relatives learn of my situation. I confided in my colleagues and the mature ones advised me to save the money that I earned for the baby,” she says.

Since she is an athlete, she stopped training when the baby came. She worked to the last trimester and gave birth at the very hospital where she was interning.

“I have a great support system. When my son came, I remember one Elijah Manyonge came and bought my fiancé and me food. Other friends also came through with so many gifts,” she says.

With the baby, she could not work; they survived on her savings. She could barely afford a househelp, because that would mean extra expenses and moving to a bigger house.

“We survived. After giving birth, we had to let our parents know and they could chip in. My mother was very resourceful, and one other relative – Oliver,” she says.

When their son was six months old, she sought employment and the two had to juggle parenting duties.

“I requested to be on the night shift at work. Ferdie (as he calls his fiancé) used to go to school and train in the daytime. When he came back in the evening, he took over from me to take care of our son,” she says.

To better take care of her family, she decided to get a second job. She could train for a short time in the evening and then rush to her night job.

“My colleagues in the night job used to wonder why I looked so tired. I was doing it for my family,” she says.

Now, she only has one job, and still trains for her sprinting.

“When I got my job, I made it clear to them that I am an athlete and I am glad that they allowed me to leave earlier than the rest,” she says.

“I am also grateful for our coach Duncan Ayiemba. He trains Ferdie and me and has always been our pillar when things were not working out,” she says.

She acknowledges that she has seen Omanyala at his worst but she still remained close to him.

“I remember when the doping scandal came up. Ferdie was very sick and I remember going to visit him in school. He asked his coach if he could go to hospital and unfortunately the medicine he was given had banned substances,” she narrates.

“That screwed him. That period taught him patience and humility and we have always thanked God for this far.”

When Omanyala finally went to represent Kenya in the 100m race in Tokyo this year, Laventa, their coach, some friends and his son were awake at 1am watching their own, our own, run for the country.

“Our son kept asking why his dad was running on TV. We were tense but in the end, very happy,” she recalls.

“God’s time is really the best. I can attest to it. You know, one of Ferdie’s friends told him in 2016 that he was going to run at the Olympics. See God’s work, five years later. What can we say,” she adds.

Now she wishes to hold her friends’ hands, the people who were unfortunately rendered jobless when the Covid-19 pandemic struck.

“They believed in me as a student,” she says.

Either way, Laventa wishes to be back on track one day and compete in the Olympics.

“An Olympic dream is every sportsman’s dream. It takes time, but I know one day I will get there,” she says.