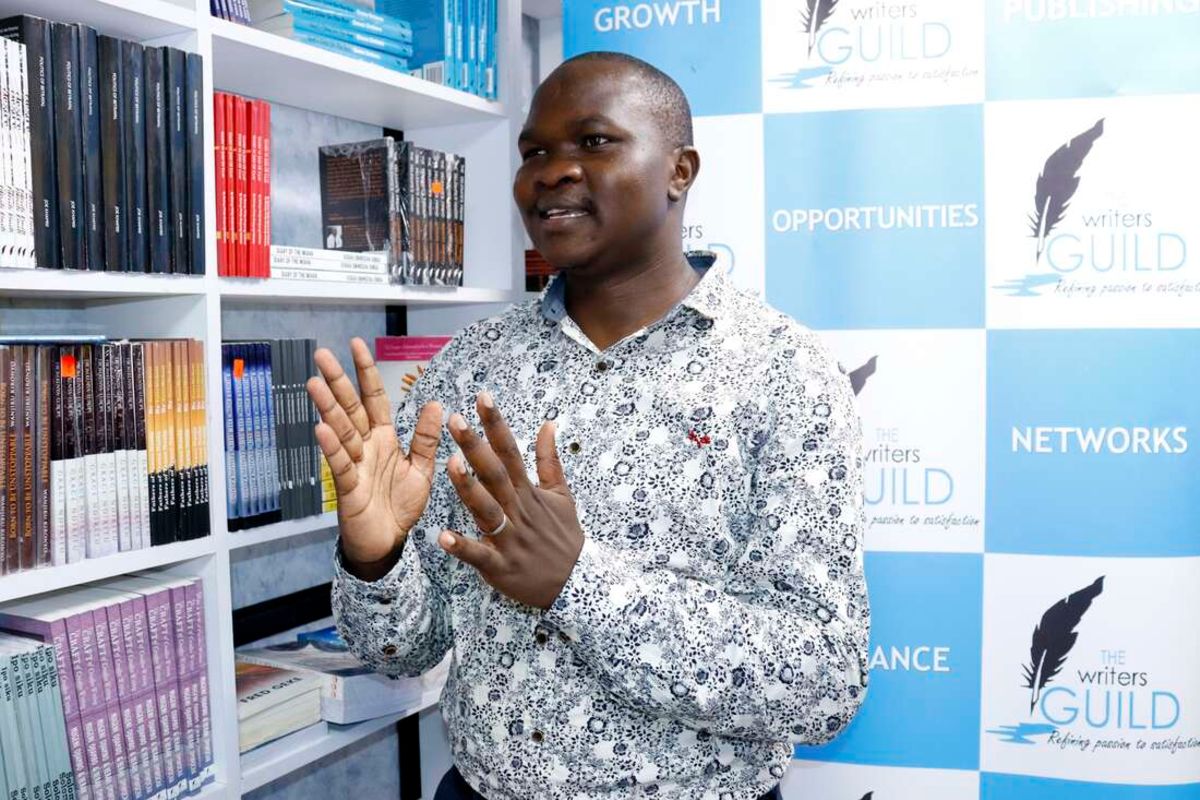 Writers Guild Bookshop, arguably the first bookshop stocking exclusively Kenyan and African authors’ books and with a reading space, is hardly two weeks old since it opened doors. Yet its story dates back seven years — to Tuesday, June 16, 2014.

It was a typical day in a Kenyan university. Lectures. Studies. And passing time. But not for Gabriel Dinda, a third year then. He remembers this day quite fondly, partly because it was his birthday. It was when he first converged his campus friends to make a great revelation. That Kenya, he believed, was a literary desert and needed a solution.

Being a “typical village boy” studying business and economics in the city, with nothing else but hopes and his mathematics books, the concept of birthdays was elusive to him.

In lieu of a grand cake cutting party to mark his birthday, he hosted a clique of his campus friends for an evening banter.

The birthday event instead birthed Writers Guild Kenya (WGK). It all began at BSSC hostel room 49 at Kenyatta University.

Armed with will and passion, and the friends who shared in his vision, Gabriel believed he was adequately prepared to “pursue his calling”.

“At times, I felt inadequate,” He reminisced. “How would a BCom student advise an arts student studying journalism on how best to write?”

When he successfully sold the aspiration to his friends, he says, that was the helluva boost he needed to stay on course.

Fast forward seven years later, Gabriel’s insatiable urge to solve Y still lingered. With each story of an author, he strives to find a solution.

“But now, it appears, the efforts have started paying off,” Mr Dinda said. “It is a reflection of cumulative and concerted efforts over the years.”

To-date, WGK has trained many writers, encouraged those who never thought they could write and collaborated with different partners to grow a vibrant community.

“As of 2021, our membership now stands at 3,017 across the country. We have trained and encouraged 102 first time authors who are now published. Many of our members now run blogs and generally, there is a new meaning and appreciation of our stories through the pen.”

But why start a bookshop when the world is reeling in a pandemic?

“Quality books are either currently stocked in houses (for lack of a distribution platform) or are stuck in our imaginations (for fear of frustration by the process),” he explained.

In November last year, the Writers Guild members came across a frustrated self-published author who had published six books but lacked a platform to get them to readers.

The team pool-read the books.

“They were exciting and superbly written,” Dinda said. “We wondered how many of such authors were out there.”

They then delved into a project they named Book Tour. And, through the book tour, they visited and interacted with readers – and authors alike.

But until on March 2021, during the Nation Media Group SME Expo, the WGK team, he said, were never convicted as much as they were when someone came and bought seven books worth Sh6,000 but remarked: “I didn’t know there were Kenyan authors. In bookshops in the capital, you hardly spot Kenyan authors.”

Two others, also during the same forum, came with not only the mission to buy also to seek a platform to sell their books.

They again asked the writers guild Kenya team to quickly read and review their books. On-spot, the team obliged.

Both were full-time employees with 8am to 5pm job. And, so their books just lie in their houses.

“And so we were sure that their stories resembled the stories of many young authors,” Mr Dinda said.

“We decided to have a distribution channel for these books that may never have a platform.”

“And this is why we decided to start The Writers Guild Bookshop in a meeting held at KICC after a Book Tour on March 20, 2021.” He added. “We then embarked on a drive to mobilise resources and start forthwith and secured a premise at Hazina Towers, Ground Floor (Suite A2), done basic renovations and started the journey.”

Is the church to blame for my being unmarried in my 40s?

Budget of a 36-year-old married father

My second wife is a serial cheat, help me, I don't know what to do