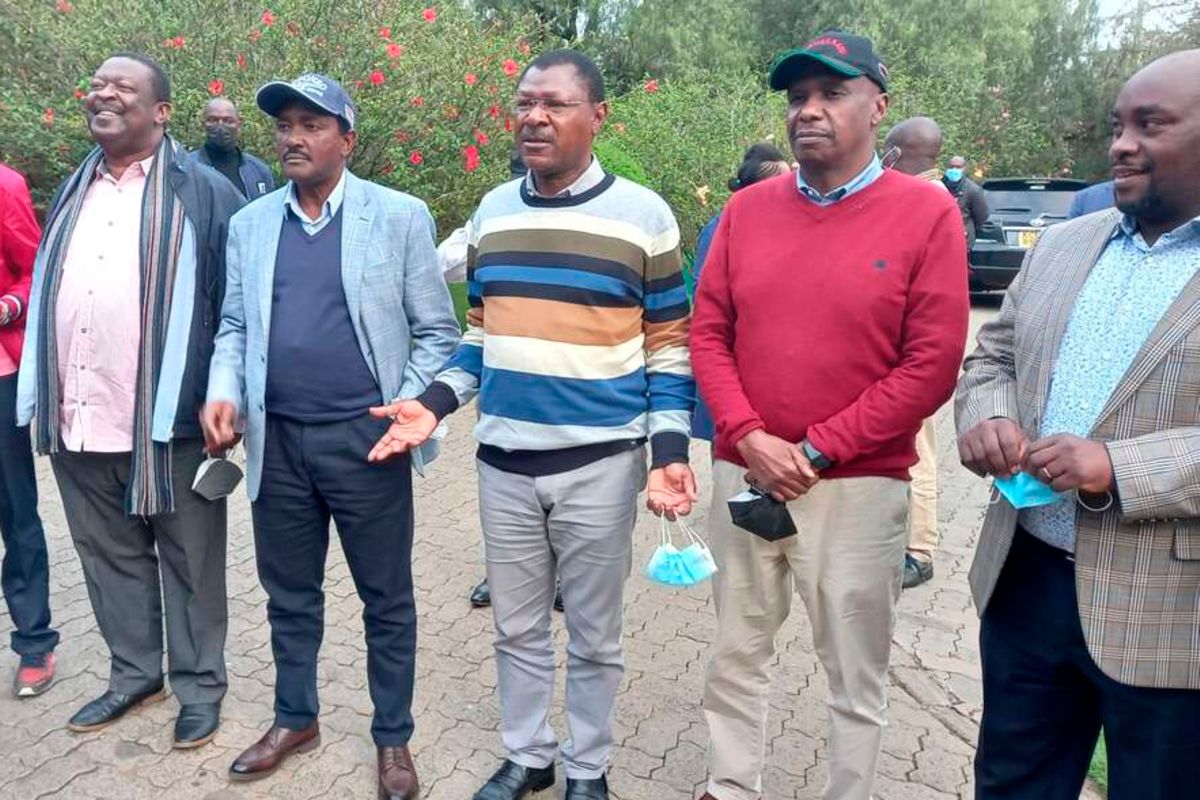 One Kenya Alliance (OKA) is on the horns of a dilemma on how to heed President Uhuru Kenyatta’s call to unite and support ODM leader Raila Odinga in the 2022 General Election.

Leaders of the nascent coalition formed after strangling Odinga-controlled National Super Alliance (Nasa) have retreated to Naivasha, and while they agreed on many issues yesterday, accommodating Mr Odinga remains the elephant in the room.

Sources told the Nation that there is general agreement among the four leaders that if they must support Mr Odinga, they will have to come up with tough conditions for him, which they will also present to Mr Kenyatta.

There is, however, an unease from allies of Mr Mudavadi who argue that by supporting Mr Odinga’s candidature, it will automatically mean Mr Musyoka will be his running mate — a move that will vanquish the ANC party leader’s presidential ambition.

The thinking is that if Mr Odinga becomes the presidential candidate, his running mate has to come from outside western Kenya in the interest of regional balance.

On his arrival at the Great Rift Valley Lodge yesterday, Mr Mudavadi exuded confidence that the deliberations will go on well.

"The journey has just started not only for the coalition, but constituent parties...Parties need to have elected governors, senators, MPs and MCAs. The meeting is a holistic approach," he said.

Curiously, Kieni MP Kanini Kega, an ally of President Kenyatta, also attended the meeting with the sole purpose of knowing what OKA has for the Mt Kenya region.

"I’m here as a friend of OKA but also as a leader from Mt Kenya," Mr Kega said.

Most MPs from the four parties also arrived for the retreat, with unconfirmed reports indicating that an informal meeting was held last night to set the tone for today's meeting.

Kitui Central MP Makali Mulu (Wiper) said they will be briefed by the technical committee on the manifesto of the alliance and future strategic plans.

Asked whether the decision to support Mr Odinga as a presidential candidate will also be on the table, Dr Mulu said the position of Wiper remains the same and that its time the ODM leader supported other candidates.

“We don’t have a problem with Raila but the problem is for the two times we have supported him, he has not won. We don’t want to get into another alliance where he will not win again. It’s time for him to support another candidate because when we win, we will all enjoy the benefit,” Dr Mulu said.

Also to be discussed is the alliance’s logo. The proposed artwork, seen by the Nation, depicts a lion and stylised "O", "K", and "A". The lion is black and the letters have dashes of red, blue and green to represent Ford-Kenya, Kanu, and Wiper — the main parties in the alliance.

Initial reactions are that the red is too prominent, giving the logo a Jubilee feel.

A member of the technical team told the Nation that the symbol has been agreed upon by the principals except for a few tweaks.

Sources within the new political outfit told the Nation that while the technical team proposed that OKA names its presidential candidate next month, the leaders want more time to consult further.

The technical team argues that unveiling the flagbearer now will give the alliance ample time to popularise the candidate.

In their 29-page report to the principals last month, the technical team had identified the absence of a coalition leader, insufficient government support, weak parliamentary strength, lack of grassroots connection and weak organisational structure as the coalition’s weaknesses.

The technical team, which also outlined the strengths, weaknesses, opportunities and threats associated with each candidate, indicated that the race is between Mr Mudavadi and Mr Musyoka.

However, the elephant in the room remains how to deal with Kanu as it has insisted that Mr Odinga must be brought on board.

It is still not clear whether Kanu will terminate the alliance with Jubilee to formally join OKA.

Kanu Secretary-General Nick Salat had earlier maintained that they are not ready to sever links with Jubilee.

Speaking to the Nation on the sidelines in Naivasha yesterday, Kitui Senator Enoch Wambua said the technical team was expected to brief the four OKA leaders early Tuesday morning.

He said the team was also tasked to come with a structured model of engagement with other political players.