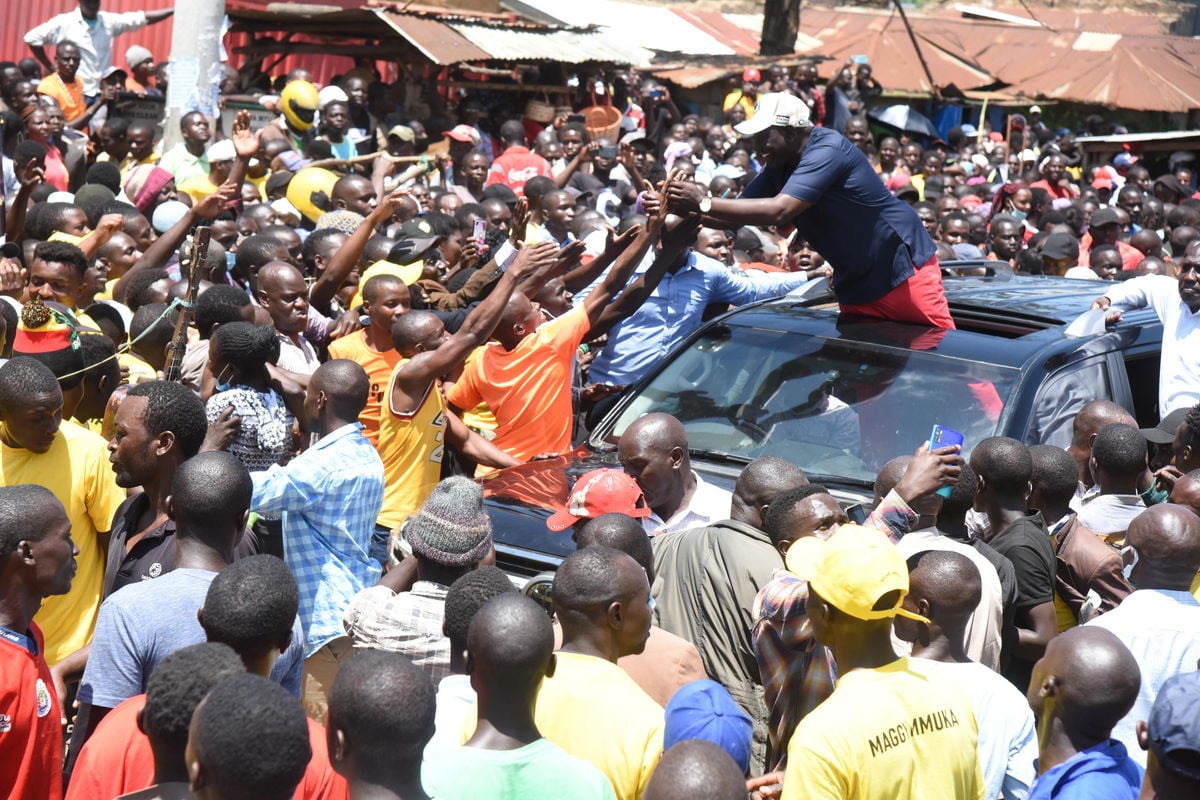 Deputy President William Ruto has dismissed the possibility of 'Deep State' stopping him from becoming the next president if Kenyans vote for him in 2022.

The DP, who traversed Kakamega County meeting traders at market centres to popularise his bottom-up economic model, assured his supporters that his presidency will be intact should they come out in large numbers to vote for him.

He said that plans are in place to guard his victory should he be elected to succeed President Uhuru Kenyatta in 2022.

"Hotel and boardroom meetings shall not bear fruits in the next presidential race. The decision on the leadership of Kenya shall be made by millions of Kenyans comprising millions of unemployed youth, poor women who toil to put food on their tables," said the DP.

He promised to revive the economy through his bottom-up economic model, which he said entails empowering the common mwananchi.

He said the current economic model benefits tycoons but hurts the common man as opposed to UDA's bottom-up strategy that will empower all Kenyans.

“Many Kenyans are not able to borrow loans because they have been listed as defaulters on the Credit Reference Bureau by online financial lending firms. But from next year, we shall allocate Sh50 billion to agriculture, Sh50 billion to give loans to small scale traders to boost their businesses and additional Sh100 billion on projects that will generate jobs for the youth in the government budget," he said.

He explained that the Sh50 billion towards agriculture will empower farmers and cushion them from exploitation from middle men.

He called on Kenyans to reject leaders, who will embark on changing the Constitution to suit their interests after being elected.

Dr Ruto asked his competitors to stop ‘hanging around’ President Uhuru Kenyatta for endorsement and challenged them to prepare well and meet him in the ballot.

“Let them stop surrounding the President and let him serve the 45 million Kenyans. Let them identify a presidential candidate, come up with an agenda and a strategy like we in UDA who have a candidate in the name of William Ruto, bottom-up economic model as our agenda and a strategy to unite all Kenyans and empower them," he said.

He claimed the former National Super Alliance (Nasa) principals were afraid of facing him at the ballot individually. He claimed that they were supporting the amendment of the Constitution to create positions.

"Because they are not well prepared, they are being called for interviews in hotels by tycoons to explain how they will protect the interests of the tycoons if they are assisted to ascend to power. As for me, I am coming to the electorate for interviews on how I will uplift their living standards if they elect me," he said.

He added: "Let us avoid fake swearing in by properly preparing and running our campaigns. Let's stop hovering around the President and sitting in hotels and think we are making efforts to win the election."

At Sabatia Market in Butere, Dr Ruto highlighted the projects that have been put up by the Jubilee administration. He challenged his competitors to say what they have done while they served in government

“Some of them have served in the highest office in the country as Prime Minister, deputy Prime Minister and vice presidents. Let them show you even a single toilet they have funded in Western," he said

He opened a UDA office at Ibokolo in Butere.

In Mumias Town, the DP promised to revive the ailing Mumias Sugar Company if elected in 2022.

He said despite efforts by the Jubilee administration to allocate more than Sh4 billion into the cash-strapped sugar miller, the money did not help due to poor management at the once East Africa giant sugar miller.

He said through the Big 4 Agenda, the government had good programmes that would revive industries.

“But someone came into the government with the handshake that disrupted all our plans. For four years, we have wasted time on the Building Bridges Initiative," he added.

Former Kakamega Senator Bonny Khalwale asked the people of Western not to be swayed with politics of ethnicity.

He said Mt Kenya regions had not fully benefited from the leadership of former President Mwai Kibaki and even in President Uhuru Kenyatta’s administration.

“It is better to identify a person who has indicated is able to help you than fighting for your own who cannot help you," said Mr Khalwale.

Mumias MP Benjamin Washiali said Mr Odinga had not helped the people of Western region when he was in government.

He blamed ANC Leader Musalia Mudavadi of standing in the way of the people of Western ascending to top positions in government.

The DP moved from Mumias town to Shianda in Mumias East and wrapped up his tour at Navakholo.