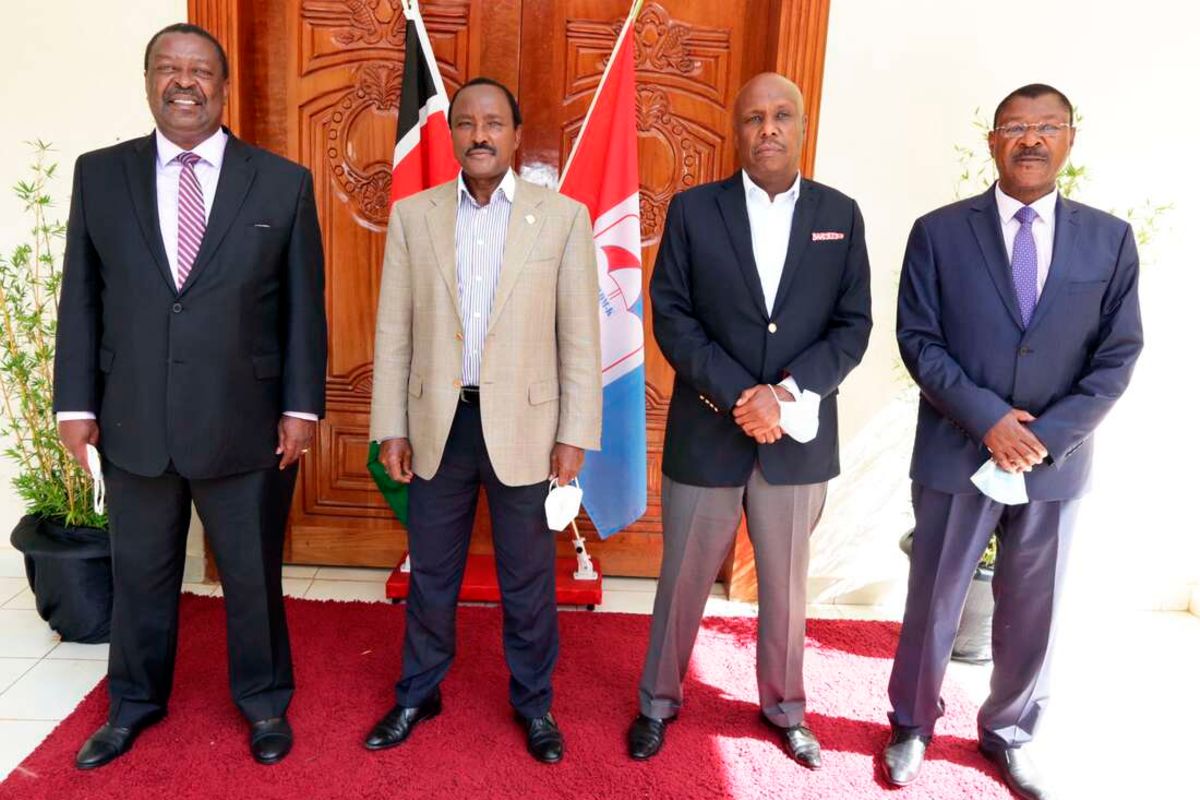 Raila Odinga’s surprise decision to pull out of the National Super Alliance (Nasa) amid its talks with Jubilee has left One Kenya Alliance (OKA) as a possible king-maker in the 2022 presidential election.

With Mr Musyoka, Mr Mudavadi and Mr Moi all insisting they are going for the top job, political pundits say Mr Odinga’s plan to chart his own path against the DP leaves OKA as the swing vote.

The recent declaration by Mr Moi, whose party insists it will not pull out of its coalition pact with Jubilee to form OKA, complicates the math for the Kalonzo-Mudavadi-Wetang’ula group.

It, however, opens up the possibility of a strong alliance between Jubilee and ODM, with Mr Odinga and the Kanu leader in it.

“The idea now is to make each of these OKA principals imagine they will be supported, keep them away from Ruto.  In the end, they will be added to a Raila ticket backed by President Kenyatta,” he told the Nation yesterday.

“As it is, Moi is already in the Raila fold. And it will not be hard to convince Wetang’ula, with Kalonzo and Mudavadi [to] follow suit.”

He believes it’s unlikely that OKA would want to go it alone, but if they do, it might be a Musyoka-Mudavadi ticket, which would cause a run-off between Mr Odinga and Mr Ruto.

“There will be a run-off in 2022 if any significant candidate, either on a Kalonzo-Mudavadi ticket or one from Central Kenya [runs] alongside Ruto and Raila.

Mr Musyoka was a key third force in the 2007 polls when President Mwai Kibaki beat Mr Odinga in a close, disputed election that plunged the country into violence. The ODM-Kenya leader garnered 879,903 votes, which Mr Kibaki, after the election, used to shore up his numbers by naming Mr Musyoka his vice-president.

Mr Mudavadi, who insists he is the best man to go against DP Ruto, citing Mr Odinga’s four attempts and the idea that 2017 was his last bullet, came a distant third in the 2013 polls with 483,981 votes.

Mr Odinga’s allies say this was significant enough to force a run-off had he joined the former prime minister.

But now OKA leaders have to play catch-up with the DP and Mr Odinga, who are already marshalling their troops. All of them are seeking the attention of President Kenyatta, complicating an already difficult decision on who to step down for the other.

Prof Ken Oluoch, who heads the political science department at Moi University posed: “Who among them is really on his own, with most of them waiting for Raila to say ‘tosha’?”

Analysts say OKA is also starting at a disadvantage since its four principals don’t have as strong a grip on their key regions as do Mr Odinga and the DP. Mr Musyoka has to battle for the Ukambani vote bloc with Maendeleo Chap Chap leader Alfred Mutua and Narc boss Charity Ngilu.

Mr Moi, on the other hand, has the daunting task of wresting tangible votes from the Ruto grip and his United Democratic Alliance (UDA).

OKA also needs “a tangible identity and a clear agenda” to push its 2022 bid forward, according to political commentator Javas Bigambo.

“All the four men have a longing to remain in the national limelight of politics as they ride the horse of ambition, but that horse is not well fed.

“Their ambitions, though welcome and noble, miss the tangible form and substance of thematic identity by which each of them can be separately recognised, and a combination of which the union of purpose would prove itself a tornado,” Mr Bigambo said.

This, he said, meant they were already at a disadvantage against the DP and Mr Odinga.

“Raila has shaped and chosen the path of being the vanguard of constitutional reforms. Ruto is a quintessential rabble rouser, whose hustler narrative, though divisive, is shaping his agenda.

The union of the four is known for fighting Raila and Ruto, with no solid agenda.”

Prof Egara Kabaji of Masinde Muliro University said OKA leaders are likely to face pressure from their constituencies not to go for any seat, if not the presidency. “The four will not agree easily on who will be their leader as the 2022 race draws closer,” he argued.

Senator Moi described 2022 as a battle of the titans.

“You’re aware that we have a heavy task ahead and it needs people who are well prepared and steadfast to win the race.

“I’m also challenging my political rivals to brace up for tough battles ahead as this is going to be that of titans,” the Baringo senator said at AIC Church, Kabarnet, yesterday.

Mystery of fourth fire in a year at Sigalame Boys School