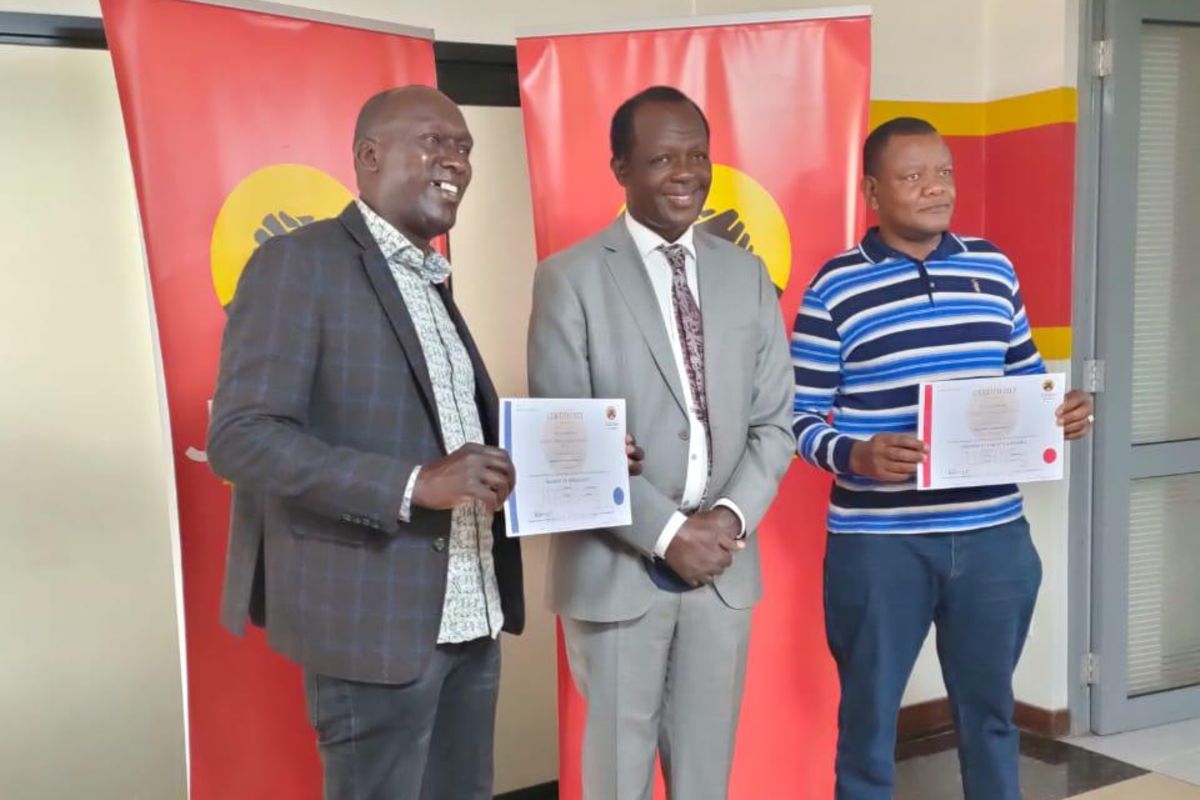 Jubilee Secretary-General Raphael Tuju, who handed over the certificates to the duo, said they emerged the best during the interviews conducted by the party on Saturday. He expressed the ruling party's confidence that the duo would emerge victorious in the upcoming by elections.

“We are glad there are no fallouts after our interviews and hope for the best in the coming by elections,” Mr Tuju told Nation.

The party on Saturday interviewed at least 24 aspirants who had expressed interest in its tickets for the upcoming by-elections.

The party interviewed seven aspirants for the Kiambaa parliamentary seat and another 17 who were seeking the party’s nod to vie for the Muguga Ward seat in Kabete Constituency.

Among the seven aspirants who were eying the Kiambaa seat on Jubilee ticket were three members of the Koinange family including his first wife June Koinange, Lennah Koinange and Damaris Waiganjo as well as Mr Josephat Gichuhi, Eric Mutura, Charles Ndung’u and the victor Karanja Kariri Njama.

“It will be recalled UDA supported PEP in the recent successful Juja parliamentary by-election and it’s on this gesture that they have withdrawn their candidate in Kiambaa. This will give the Hustler Nation an opportunity to focus on the campaigns without unnecessary division and negative energy,” UDA Secretary-General Veronica Maina said in a statement Monday.

She however, denied claims by Mr Kuria that the party belongs to its chairman – former Machakos senator Johnston Muthama and that it was being run by sitting MPs.

“We, however, wish to state categorically that UDA is neither Hon Johnston Muthama’s party nor is it managed by sitting MPs. On the contrary, UDA is the Hustler’s party. The ongoing registration of members is a case in point – mama mbogas, hawkers, salonists, barbers, watchmen, waiters, cleaners, boda boda and mikokoteni riders, farmers, kiosk and shop owners, matatu drivers and conductors, among other sections of society, have joined the party in their hundreds of thousands,” said Ms Maina.

She went on: “For the first time, there is a party that has deliberate representation of all hustlers. This has been affirmed by the choice of our candidates in Kiambaa and Muguga. Our candidate in Kiambaa, Njuguna wa Wanjiku, is a young hustler, a child of a single mother.”

UDA, she noted, is a party of the people that believes in democracy, transparency, unity and that every hustle matters.

“These are values it practices and will continue to now and in the future,” added Ms Maina.