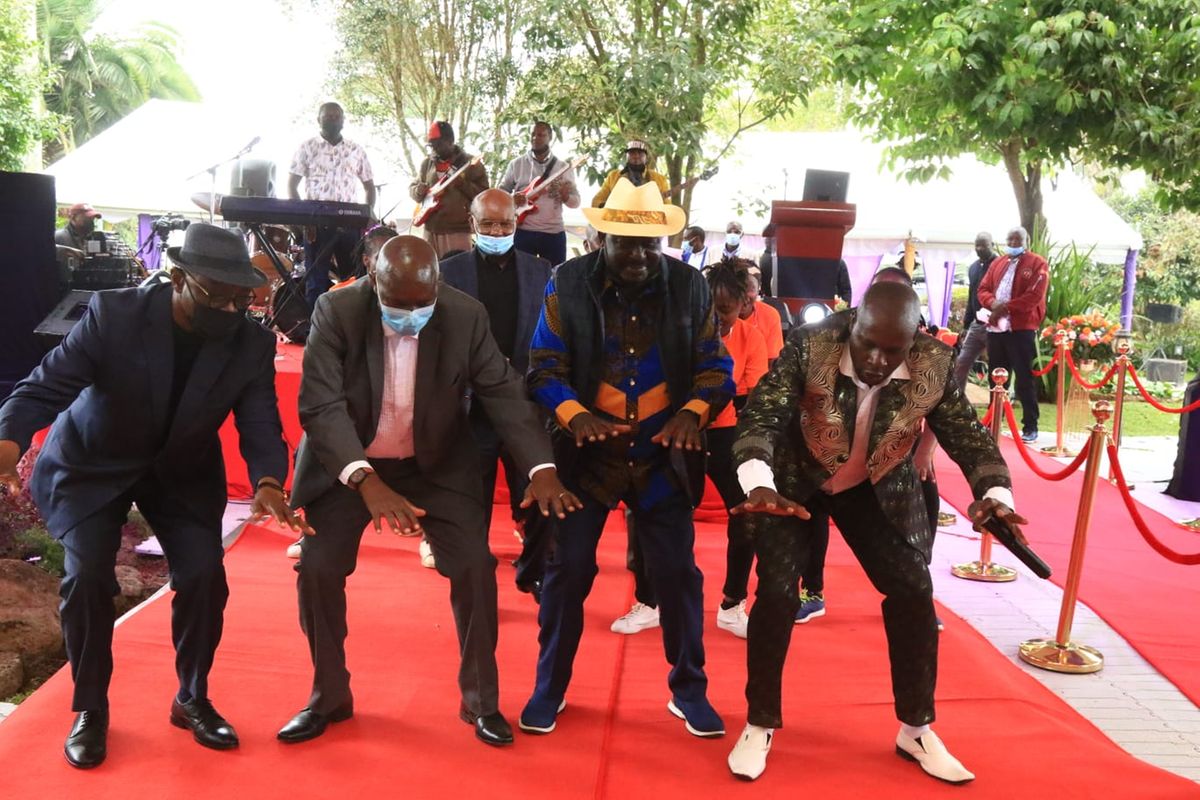 President Uhuru Kenyatta loyalists in Mt Kenya region Tuesday gave the strongest hint yet that they will back ODM leader Raila Odinga for the presidency.

They gave snapshots of the proposed coalition between Mr Odinga’s traditional supporters and the president's vote bastion that will front the ‘Handshake’ candidate to cement the 2018 political truce between the President and the opposition leader.

More than 50 elected leaders who support the truce attended the day-long music extravaganza to celebrate and uplift local artistes.

The occasion was viewed as a strategic political forum to test the waters for Mr Odinga’s campaign tours in the Mt Kenya region, which have been postponed for three months.

Mr Odinga announced that the government pushed the increase of Skiza Tune rates payable to musicians through an initiative by National Assembly Finance committee chaired by Homa Bay Woman Rep Gladys Wanga. The Skiza Tunes service is a personalised ring back tone service where users can download or record a tune or message at a fee.

The rates paid to artistes were increased from 16 to 41 percent and calls were made to raise the amount to 52 percent.

Mr Odinga said he was at home with Mt Kenya voters, whom he holds dear as comrades in the struggle for democratic gains, as well as his in-laws.

He said the handshake team had started the journey towards securing Kenya's future "starting here today, moving to all counties alongside the President."

Ms Waiguru said the region will follow the President’s direction with regard to his successor.

"Eventually, we will converge at a coalition that will be big and fresh. It will shake the political arena. It will be the winning coalition," said Igembe North MP Maoka Maore.

Mr Muriithi said since 1963 the region has remained in political debt to Mr Odinga and his family for the sacrifices they have made for the country.

"Before we pay that political debt of latter years, we first go to settlement of older debts. It's time to first pay Mr Odinga's debt," Mr Muriithi said.

Mr Wa Iria said the country has moved away from stereotypes that inhibit ambitions on grounds of tribe and regions.

He said Mr Odinga is free to visit all corners of the region "and when time comes, we will bag the presidency.”

To welcome Mr Odinga, the governor gifted him with a 13-month-old pedigree dairy cow.

Governor Alfred Mutua (Machakos) said even those who don't admire Mr Odinga have now come to appreciate his politics of purpose.

"Those who want to leave, just get off. We will follow the President and Mr Odinga and all others who will be willing will remain," Dr Mutua said.

Kakamega Governor Wycliffe Oparanya said there is a plan to have all key players in the president's corner to unite with those in Mr Odinga's camp and reward him (Odinga) with the ultimate prize.

Kisii governor James Ongwae said Nyanza had endorsed Mr Odinga to go for the top prize and efforts are now being rolled out to transform the political truce into a political union that will elevate him to be the fifth president.

Kisumu Governor Anyang Nyong'o said it is the start of a journey that will “reward a contestant whose life sacrifices can be read like an open book and that man is Mr Odinga".

"The only good sin he has ever committed against Mt Kenya region is to gift them with a Mwai Kibaki presidency in 2002," Dr Oginga claimed.

Addressing issues dear to the region’s economy whose backbone is agriculture, Mr Odinga said together with the President, he is ready to help free the many sectors from the grip of brokers.  He cited the reforms in the tea, coffee, dairy, beef and other sectors designed to eradicate poverty.

The choice of Mr Macharia's home to celebrate the Skiza premium gain was in tandem with the Council of Eminent Persons that brings together Murang’a county billionaires, who have endorsed Mr Odinga to succeed President Kenyatta.

Mr Macharia said he has always supported Mr Odinga and has all along been a personal friend of the family.  Already, a council of elders from the region has started a cleansing of the frosty political perceptions from Mt Kenya region voters that have dogged Mr Odinga.

A function to be held at Summer Village, Maragua Sub-County, in September, is organised by a wing of elders chaired by Mr Kiarie Ciombou.

"The ceremony will entail slaughtering of goats and making sacrifices to our gods of friendship to bond us with Mr Odinga and help win acceptance in his commitment to unite with our kingpin Uhuru Kenyatta to take us to a more united and prosperous country," revealed Mzee Muchoki Kiranga.

Start of a journey

Mr Odinga said Tuesday’s event was the start of a journey that will climax in fulfilment. Political rewards are not supposed to be paid in heaven, he said, "but here in the world of the living” and it is time to reward him by elevating him into the presidency.

Former Dagoreti South MP Dennis Waweru said Mr Odinga is being reloaded into Mt Kenya region "as that man who is good for our entrepreneurial culture".

Mr Odinga, in partnership with the President will gain inroads into the region, as opposed to the "culture of tokenism being promoted by Deputy President William Ruto’s wing", he said.

He said the business community in Mt Kenya region is now resolute “to pursue their 2022 succession interests in a Mr Odinga presidency."

Nominated MP Maina Kamanda said Mr Odinga's rating in Mt Kenya region is rising "and with the help of God we will undo all the mudslinging that we have damaged your name with".

Kieni MP Kanini Kega endorsed Mr Odinga as the “prince of peace” who helped the President to hold the country together after a very divisive election.

Mr Kenneth who is touted as a possible running mate of Mr Odinga said the real bottom up economic model to help Kenya is that which “gives the people a fishing rod but not fish”.

He said competition is not eternal "and we will overwrite the good over the bad".