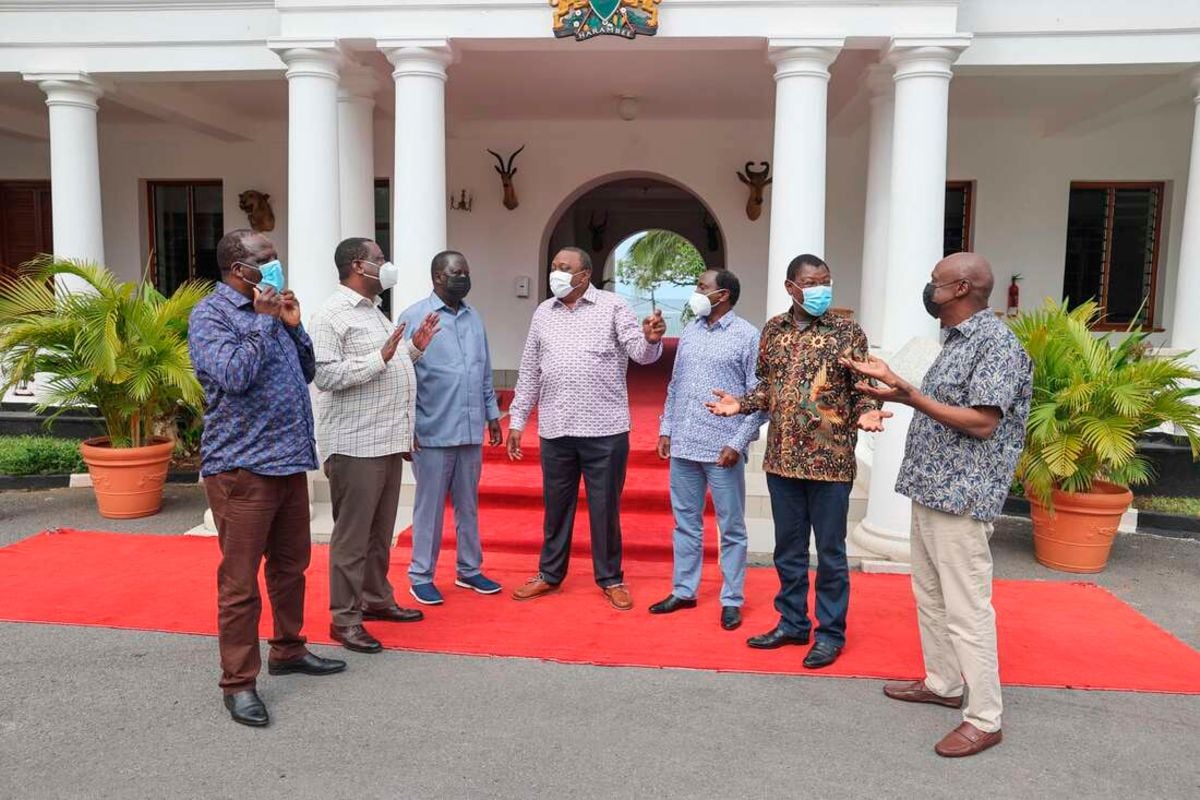 President Uhuru Kenyatta yesterday inched closer to brokering a truce between Raila Odinga and One Kenya Alliance (OKA) principals, with the latter reportedly giving a conditional nod to back the ODM leader’s presidential bid as they await tomorrow’s court ruling on the Building Bridges Initiative (BBI).

This came even as the Head of State told the OKA chiefs to start the process of disbanding the alliance in readiness for a larger formation — a coalition for national unity — that would bring in more leaders to reflect the face of the Kenya ahead of the 2022 elections.

The OKA chiefs, most of who were principals in the disbanded National Super Alliance (Nasa), had vowed not to back Mr Odinga’s candidature again, citing their 2017 coalition agreement that required the ODM leader support one of them in 2022.

With the limited positions under the current Constitution, OKA leaders Kalonzo Musyoka (Wiper), Musalia Mudavadi (Amani National Congress), Ford Kenya’s Moses Wetang’ula and Kanu chairman Gideon Moi, are said to have raised concerns about distribution of positions, should the larger formation be realised.

This, according to sources, informed their request to Mr Kenyatta and Mr Odinga to await the outcome of the BBI case at the Court of Appeal before they reconvene to fine-tune the deal next week.

“There is hope for unity. We have been saying all along that you cannot ignore Raila and neither can you ignore his former Nasa allies or Jubilee coalition which also consists of Kanu,” Kanu secretary-general Nick Salat said of the development, adding: “We are happy that the leaders are seeing sense on the calls for unity and we hope we shall soon have a broader winning outfit.”

The developments at State House Mombasa, point to President Kenyatta’s rising authority in commanding his succession, with the Head of State keen to ensure his estranged deputy, William Ruto, is defeated.

Sources who attended the closed-door meeting intimated to the Nation that the Jubilee Party leader warned Mr Odinga and the OKA chiefs against creating chances for a run-off, which he termed “risky”.

“The OKA principals appeared to cede ground, but the meeting was not conclusive until the court pronounces itself on the BBI on Friday (tomorrow),” said a highly placed source privy to the discussions yesterday.

“There are still hopes that the Appellate court would resuscitate the drive and so the positions can be discussed next week.”

Mr Odinga had earlier during a phone interview on Radio Nam Lolwe said he will not challenge the court verdict at the Supreme Court should it go against his wishes.

The ODM leader also indicated that he and President Kenyatta were to meet the OKA leaders to inform them about their plans to form a “coalition of the willing,” as a political vehicle for the 2022 General Election.

“We envisage a larger coalition of the willing. We have been with them (OKA) and know them quite well, but we don’t want to despise anybody. We want anybody who wishes to walk with us to join us. We are in talks with them. Even today (yesterday), we are going to meet them and will tell them this is the plan... this is the path we should follow,” Mr Odinga said during the morning interview.

The Nation has also established that with or without the BBI, the next battle frontier is likely to be the running mate position, should the OKA team agree to join the Kenyatta-Odinga coalition.

“Even in yesterday’s meeting there were concerns raised by the OKA team on the plans for a running mate slot should they agree to back the ODM leader. However, both the President and Mr Odinga were non-committal on the matter, with the Head of State insisting on the outcome of BBI,” another source said.

“The running mate slot has to be based on the numbers a candidate can bring on the table. Remember, if the OKA brigade agrees to back Raila, our strategists shall review their numbers vis-a-vis Mt Kenya region numbers which President Kenyatta has promised to deliver to the new coalition.”

But even if the deal is reached, OKA chiefs are already facing resistance from within their parties.

ANC deputy party leader Ayub Savula insisted that the party will not buy any idea to have its leader drop out of the presidential race.

“I have just received a phone call from Bungoma Governor informing me that my people had agreed to back Raila. I have dismissed him. But if Musalia goes that direction, it will sound a death knell for him politically,” Mr Savula told Nation.

Mr Wycliffe Wang’amati, the Bungoma Governor, however, did not confirm this when reached on phone.

Jubilee vice-chairman David Murathe said the OKA principals are facing intense pressure from their allies not to step down.

Meanwhile, Mr Odinga seems keen to lure OKA back to his fold, with his party meeting some of the demands it had reneged on in the Nasa agreement.

Yesterday, it emerged that ODM had already deposited some money to Wiper and ANC as agreed by Mr Odinga in partial settlement of the political parties’ funds owed to the Nasa partners.

The Mombasa meeting came as Dr Ruto accused the team of having no plans for the country other than struggling to unite to defeat him in next year’s polls.

“They are trying to find means of stopping a defeat. But they don't understand that Kenyans are looking for someone who has an agenda and plan for the jobless and how to improve businesses and change lives,” he said.