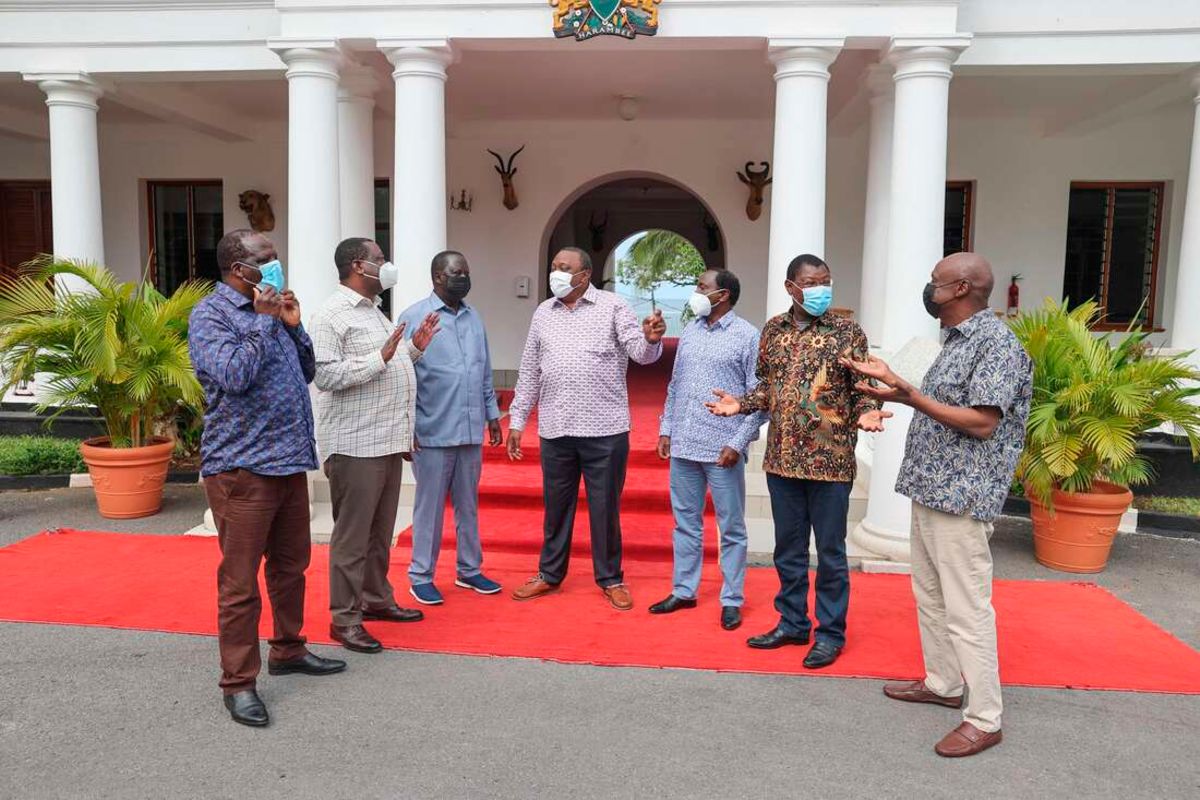 Mr Kenyatta on Tuesday met the four main opposition leaders for talks over plans to appoint new cabinet secretaries and agree on a 2022 presidential flag-bearer, according to multiple sources familiar with the discussions.

Sources said the meeting was initially planned for Monday but Mr Musyoka requested a one-day delay to allow the launch of his presidential campaign secretariat, which yesterday seemed to stoke fires within the competing opposition camps. Some officials suggested that Mr Musyoka wanted to head to the meeting having launched his presidential bid, apparently to raise his stakes in the coalition negotiations.

President Kenyatta and Mr Odinga have been at the coast since last week — the ODM leader confirmed talks with the President in Mombasa — and the invitation of the other four leaders to the State House meeting was portrayed by their respective handlers as signalling a looming major announcement.

State House spokesperson Kanze Dena in a statement said yesterday’s meeting “discussed the State of the nation including Covid-19’s impact on the country and how to revamp the economy, the importance of maintaining peace, unity and national cohesion.” Mr Mudavadi reiterated Ms Dena’s statement.

“Let’s stick to the communication that has been dispatched by State House and not to read too much into the meeting,” said Mr Mudavadi in an interview.

The Nation has reliably established that, apart from discussions on a broad-based alliance, another key agenda of the meeting was a possible cabinet reshuffle that could weed out allies of Deputy President William Ruto, whom the Head of State has accused of failing to help him safeguard his legacy.

A senior official from one of the four parties in yesterday’s meeting disclosed in confidence that the President briefed the leaders on his plans to shape his legacy ahead of the end of his term.

“The President was very mad with the DP following his discussions with a so-called foreign investor with questionable credentials and will no longer continue serving with people exhibiting divided loyalty,” the source said.

The party chiefs are said to have been asked to submit names of possible appointees. Another source told the Nation there were divisions within the opposition ranks triggered by the cabinet appointment plans.

The DP has said he has had secret meetings with CSs and other senior government officials and governors sympathetic to his political cause, but who would rather remain anonymous for fear of harassment by state agents.

Mr Oparanya, when reached for comment, promised to speak to the Nation later as he was boarding a flight back from Mombasa.

Efforts to reach him later were futile as his cell phone went unanswered. Mr Musyoka, Mr Wetang’ula and Mr Moi also refused to comment on the matter.

Another source revealed to the Nation that President Kenyatta was keen on the unity and appeared to advise the leaders to either “unite or perish.”

President Kenyatta, who seems to have settled on Mr Odinga as his successor, is said to have even questioned the other leaders whether they were working for his deputy, with whom he has fallen out.

In yesterday’s meeting, Mr Odinga is said to have linked up with Mr Oparanya in a bid to neutralise any possible attacks from his former Nasa principals who have since decamped to the One Kenya Alliance (OKA).

Mr Musyoka, reportedly, in somewhat a jocular fashion, questioned Mr Oparanya’s presence, attracting a bit of unease from Mr Odinga in the “somewhat tense but easy meeting.” Another source said the leaders expressed reservations on the cabinet offer.

They argued the beneficiaries would likely be politicians who would serve for a few months given by law they would be required to resign by February to contest elections.

There was also the reluctance about carrying Jubilee’s political baggage in the final year. But the leaders asked for time to consult their respective parties, the source said.