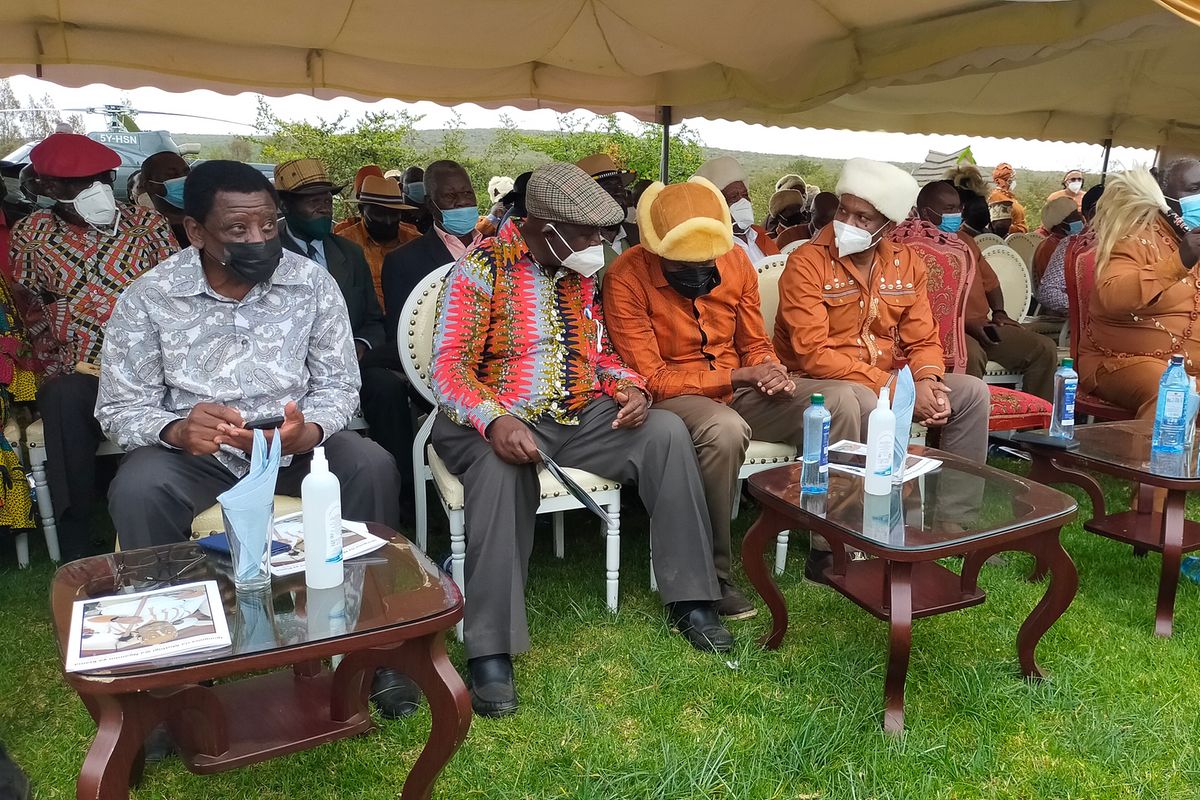 The former Prime Minister is widely expected to win the endorsement of Kikuyu elders on a tour that has created excitement in the Mount Kenya region.

Mr Odinga will lead the Luo Council of Elders to a meeting with their Kikuyu counterparts in Nyeri tomorrow in a bid to forge a common ground between the two major tribes ahead of his fifth stab at the presidency.

“Mr Odinga is here for the purpose of peace. For now, we are not focused on politics because he has not yet declared his interests. We are focused on his ‘Azimio la Umoja’ agenda,” said Kikuyu Council of Elders chair Wachira wa Kiago.

The ODM leader had hosted the two groups of elders at his Bondo home in December last year.

The former Prime Minister’s ODM is expected to form a coalition with President Kenyatta’s ruling Jubilee Party ahead of the polls, a political union that could shore up his ratings in Mt Kenya.

Mr Odinga has over the decades had difficulties in penetrating Mt Kenya, but the March 2018 ‘handshake’ with President Kenyatta has renewed hopes of flipping the region in the 2022 General Election.

During the Mashujaa Day celebrations at Wang’uru Stadium in Kirinyaga, Mr Odinga reminded Mt Kenya region that he campaigned for Mr Kibaki in 2002 after an accident that had immobilised the opposition candidate.

“We shall plan and coordinate a structured engagement with the region focusing on elected leaders, community leaders, business leaders, farmers’ organisations, the faith organisations and key opinion leaders and shapers in the region,” they said in a statement.

While the elders have said the main agenda of the meeting will be unity between the tribes, the ODM faction is pushing for their backing in his fifth stab at the presidency.

Politics is, nonetheless, expected to take centre stage. Two factions of Kikuyu elders two months ago called for a truce ahead of Mr Odinga’s tour.

The Kikuyu Council of Elders and Kiama Kia Ma resolved their differences in a meeting that was attended by allies of the ODM leader.

Dr Oburu Oginga and Siaya Senator James Orengo had led a delegation from Luo-Nyanza during the coronation of a new national patron for the Gikúyú elders’ caucus.

Rarieda MP Otiende Amollo said ongoing negotiations with elders have been fruitful. “We expect him to get the blessings from the elders and that he will be endorsed for the presidency. He is very much welcome to the Mt Kenya region,” Kieni MP Kanini Kega told the Nation.

Mr Odinga will also hold a youth forum at the Kabiruini grounds as he seeks to garner the backing of the populous Mt Kenya youth block. Local politicians allied to President Kenyatta and the ‘handshake’ are also expected to be in attendance.

On Saturday, Mr Odinga will meet the Nyeri business community at Nyeri Golf Club before proceeding to several rallies in Nyeri Town, Othaya, Mathira and Mukurweini.

The ODM leader is also seeking to counter the effect of Deputy President William Ruto who has captured significant support in the region.

The Mt Kenya region remains divided on who to back in the 2022 presidential election. Some of the region's leaders have declared support for Deputy President William Ruto, insisting that he is the man best placed to succeed Uhuru.

Dr Ruto has also planned what appears to be a visit to counter Mr Odinga’s tour with a visit to Kirinyaga County on Sunday, where cracks have emerged following the decamping of Governor Anne Waiguru to UDA.