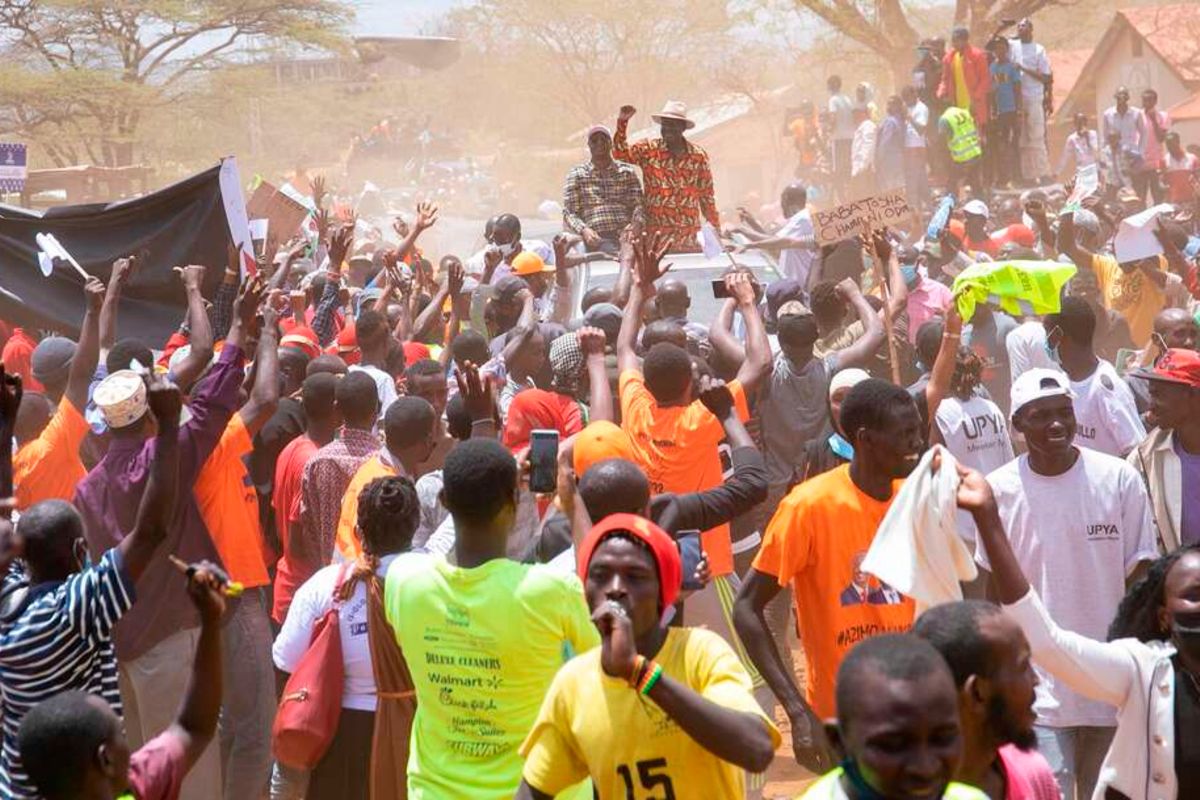 ODM leader Raila Odinga has hit out at Deputy President William Ruto for what he termed as misleading the youth with the ‘wheelbarrow’ narrative instead of offering them jobs.

He said it was unfortunate that Dr Ruto was offering young people wheelbarrows, after failing to deliver on the laptop programme, which the government promised in 2013.

Mr Odinga said he will focus on reviving the economy, uniting the country and ensuring that Kenyans are treated equally regardless of their tribes or social status and have access to equal opportunities.

“We want to end tribalism and ensure Kenyans are treated equally,” he said while on a tour of Isiolo to popularise his Azimio la Umoja initiative.

He said while plans to amend the constitution were stopped by courts, his government will ensure 35 per cent of national budget goes to the counties for increased development and improved services.

“I have always been at the forefront in defending devolution and my government will ensure counties get increased monies so that we create jobs for young people and ensure development at the grassroots,” he noted.

Accompanied by a host of MPs and five governors from across the country, Mr Odinga said his government will create a Youth Ministry and National Youth Council for empowerment of the young people.

Each vulnerable family across the country will get Sh6000 every month to cushion them against hunger, he said.

Speaking at Isiolo police grounds, Mr Odinga appealed to the youth to apply for Identity Cards and register as voters to support his presidential bid.

“I want all of you to be my soldiers but you must have a gun and a bullet,” Mr Odinga said in reference to IDs and voter cards.

He cited Garbatulla-Modogashe-Mandera Road and Lapsset project as among those that he lobbied for in the interest of Northern Kenya and Coastal residents.

To empower the pastoralists’ communities, the former prime minister said he will establish industries and tanneries in the region for leather-making so that residents are economically empowered and food secure.

Mr Odinga promised to push for completion of the Isiolo export abattoir and extension of Isiolo International Airport’s runway to ensure locals maximally benefit from the two facilities.

He promised to also construct a dam to tap flood water from River Ewaso Nyiro to ensure there is enough for irrigation and livestock.

Mr Odinga also promised to work with elders in ending protracted border disputes among counties in Northern Kenya, which have in recent past claimed many lives.

“We do not want to continue losing our people due to boundary issues. I will ensure their resolve in peaceful manner by involving local elders,” he noted.

Treasury CS Ukur Yatani, who is also the leader of Upya Movement of Northern Kenya, said the region was solidly behind Mr Odinga but he must safeguard their interests.

Laisamis MP Malimo Arbelle and his Ijara counterpart Safia Abdi said Mr Odinga was the one rightly placed to succeed President Kenyatta due to his past development track.

Wajir South MP Mohammed Mohammud Sheikh and his North Horr counterpart Chachu Nganya said the region was solidly behind Mr Odinga’s candidature as he had proven to have the country’s interests at heart.

“We will support the leader who is mindful of the peace of the country,” Dr Karugu said.

Isiolo Nominated MCA Sumeya Bishar said the ODM leader had consistently fought for the country’s democracy through multiparty and played crucial role in formation of the devolved units as was a development oriented leader.

Her Garissa counterpart Abdul Haji warned young people against being misused by politicians to cause chaos.

Mr Kinyanjui and Public Service CAS Beatrice Elachi appealed to Kenyans to register as voters to participate in the 2022 general elections.

The event was disrupted for several minutes as a group of youths booed Mr Kuti.