Uhuru rattles OKA by insisting on Raila for 2022 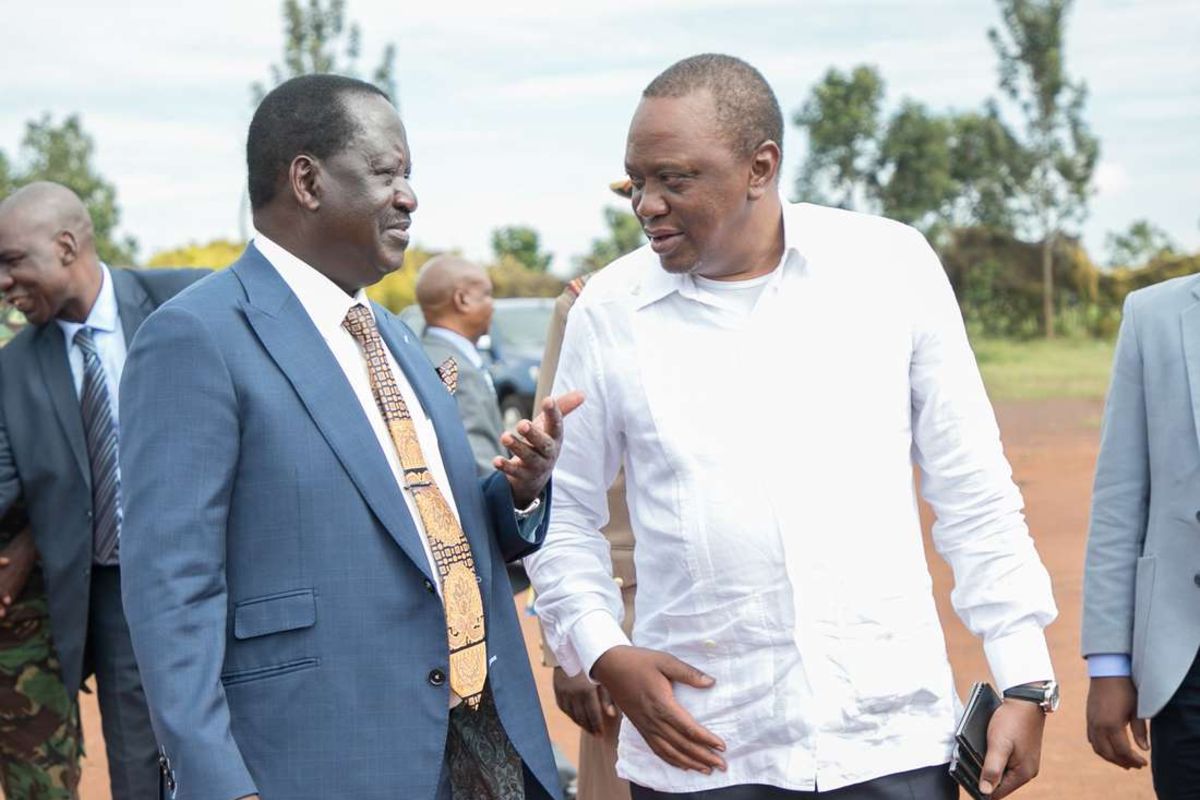 President Kenyatta has settled on ODM leader Raila Odinga to take over his mantle in next year’s election, sources close to recent succession talks at State House, Mombasa, have told the Nation.

The President, multiple interviews revealed, believes Mr Odinga, his arch-rival in the 2013 and 2017 presidential polls, is best placed to trounce Deputy President William Ruto, a man who has since fallen out with his boss and is charting his own path to State House.

The endorsement would crown the political dalliance between Mr Odinga and the Head of State — camaraderie that started with the surprise March 9, 2018 Handshake that calmed the nation following a stormy poll season that saw the annulment of President Kenyatta’s first round win.

However, the President’s succession ship is facing turbulence from partners who are either hesitant or adamant to board the One Kenya Alliance (OKA).

Also in the OKA team is Kanu chairman Gideon Moi, who appears to lean towards the ODM leader.

Sources disclosed that President Kenyatta is concerned about OKA-Odinga unity, which would guarantee the alliance a first-round win over the DP. His headache now is to figure out how he will convince the team to back the former Prime Minister.

Mr Savula told the Nation that Mr Mudavadi had briefed the leadership of his party on the details of the meeting with the President, which pointed to a decision to have the leaders rally behind Mr Odinga’s candidature.

Mr Savula disclosed that the OKA leaders had been pressured to drop their bids for Mr Odinga’s sake, but pointed out that ANC will reject such attempts.

“Our principals were put under a lot of pressure. I spoke to him (Mudavadi) yesterday after the meeting and he told me he stuck to his guns,” he said.

“Sisi tumekaa ngumu. Hatuwezi beba mtu tena. Hatubebi mtu. There is pressure to have Musalia to support Tinga (Raila) lakini sisi hatubebi mtu tena (We have stuck to our guns. We’re not going to prop up anybody this time round,” Mr Savula said.

Mr Swanya confirmed that OKA principals had been asked to rally behind Mr Odinga “but they flatly declined.”

“Raila’s time is over. Our position is very clear. Raila should be a gentleman and retire with Uhuru Kenyatta as he has a very good opportunity to shape the next leaders of this great nation,” he told the Nation.

Kanu secretary-general Nick Salat also told the Nation that matters succession were among issues discussed at the meeting.

“Something will come out of it soon,” Mr Salat said.

Their revelations confirm a recent declaration by one of President Kenyatta’s allies, Jubilee vice-chairman David Murathe, who intimated that the Head of State had since settled on Mr Odinga as his heir.

“Jakom (Mr Odinga) is on his way to Mombasa to meet his brother (President Kenyatta) down there. I’d talked and won’t talk again: I said prepare for Jakom to be the fifth President. Walio na macho waone. Dalili ya mvua ni mawingu (let those with eyes see, the clouds are gathering),” Mr Murathe said at Crowne Plaza Hotel in Nairobi where he accompanied Mr Odinga for a meeting.

Mr Odinga later held a closed-door meeting with Mr Murathe and Jubilee Party secretary-general Raphael Tuju, where he was briefed of the ongoing coalition talks between Jubilee and ODM, before leaving for Mombasa.

That President Kenyatta is slowly rolling out the red carpet for Mr Odinga became even more evident, yesterday, after the ODM leader, the de facto Opposition leader, was dispatched from Mombasa to meet a delegation of ambassadors, heads of mission and UN officials for discussions in Nairobi.

“(The discussions were) particularly on helping get the economy back on track to cushion livelihoods, support for democracy and the fight against Covid-19,” Mr Odinga wrote on his Twitter page.

Mr Savula wondered at the kind of analysis President Kenyatta was using to pick Mr Odinga. He said: , stating that their scrutiny was that “he (Raila) is not sellable in Mt Kenya region,” which Mr Savula noted is crucial in the 2022 succession.

“The only option to win this presidential election against Ruto is to support Musalia because he is sellable in Mt Kenya,” the ANC deputy party leader said.

President Kenyatta’s headache to broker unity seems a distant dream, with OKA fighting for its own birth and survival as its leaders continue to jostle for control.

Wiper co-vice chairman Mutula Kilonzo Jnr yesterday insisted that it was time for the other leaders to back Mr Musyoka for the presidency.

“Mr Kalonzo has been very clear about this issue. He’s the one to be supported this time round. The issue is moot from his perspective and Wiper,” Mr Kilonzo said.