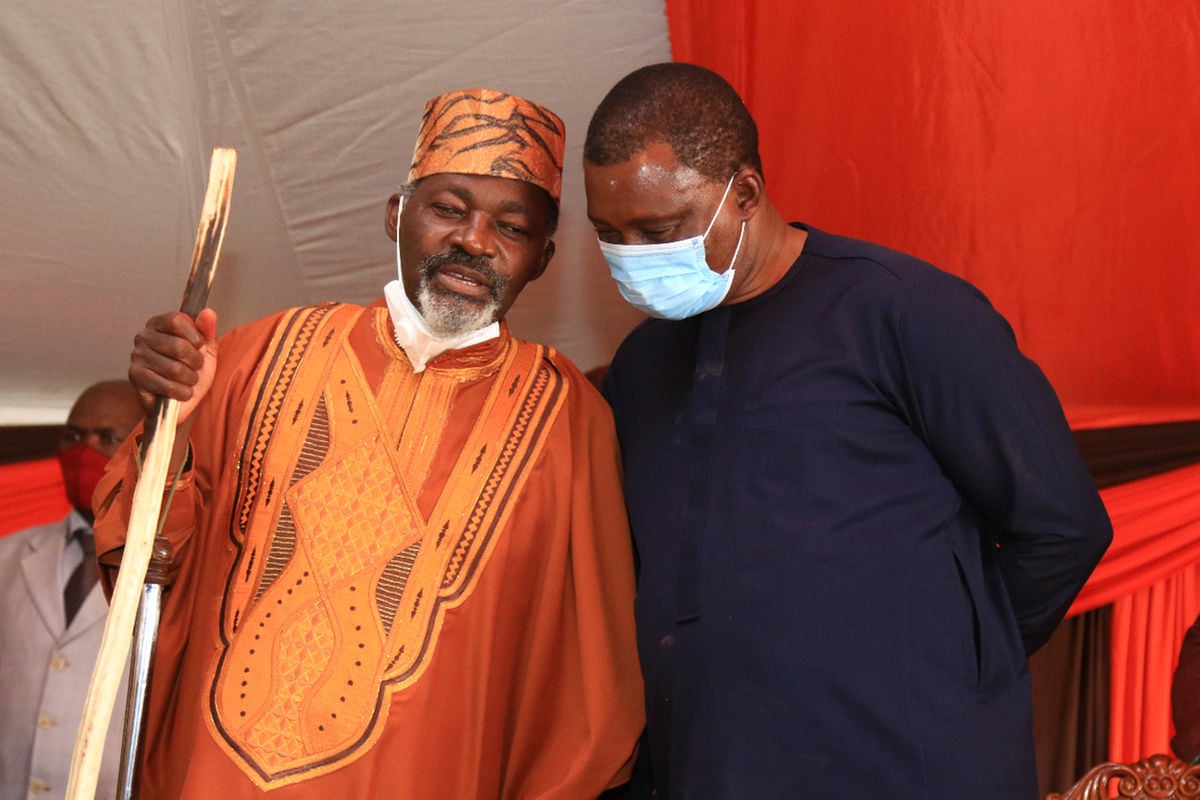 President Uhuru Kenyatta was aware and tacitly supported plans to install the National Assembly Speaker Justin Muturi as spokesman for the Gikuyu, Embu, Meru Association (Gema) communities, it has emerged.

The president's cousin, Captain Kung'u Muigai, who was among the key planners of the Saturday ceremony, says the President was all along aware of the controversial plan.

It all started, according to Mr Muigai, with the president’s suggestion in January last year that Kenyans should consider having a rotational presidency, to promote equitable sharing of power among all the country’s tribes.

The president, while speaking in Kakamega at the funeral of the Amani National Congress leader Musalia Mudavadi's mother, said that time had come for other communities to lead the nation.

Only leaders from the Kikuyu and Kalenjin tribes have held the presidency more than six decades since independence, out of the more than 42 Kenyan ethnic communities.

Taking the cue from the president’s statement, Mr Muigai revealed, Meru’s Njuri Ncheke elders suggested to the president that communities that reside in the west of Mt Kenya should support a person from the east to lead the region. The proposal was made in February during a meeting at the Sagana State Lodge.

Speaker Muturi is from the Mbeere community in Embu County and one of the senior-most government officials in Mt Kenya East.

“The elders told the president that time was ripe that their brothers from the West support one of their own. The analogy used was that we from the West only need them during elections and voting," said Mr Muigai, who is also the patron of the National Council of Elders.

"No one opposed the suggestion at the time. Not even the president. Elders from Embu's Nyangi Ndiriri and Meru's Njuri Ncheke then started the process of grooming their own. And today is the culmination of that journey by the Agikuyu," Mr Muigai said at the Saturday event.

Political leaders from the populous counties have for years now harboured plans to establish the region as a distinct area after many years of being lumped together with Central Kenya, a political intent they made clear to President Kenyatta at the Sagana meeting.

The elders told the president that Mt Kenya East, which has traditionally voted for ruling governments, ‘has been used to endorse leaders from other regions’.

The Nation has also learnt that Mr Muturi’s elevation is part of a larger plan to form a regional political party, politicians and elders now say.

The historic ceremony happened at a time when speaker Muturi had displayed unusual boldness given the political implications the move comes with.

The Mt Kenya region has become increasingly complex politically, with leaders from other regions launching a charm offensive to win swing votes in the belief that the community is not likely to produce Kenya’s next president.

Leaders and elders from Meru, Tharaka Nithi and Embu counties also say time is ripe for a regional party that is likely to be headed by Mr Muturi. The political re-alignment is fuelled by President Kenyatta’s succession and his impending exit next year after serving his two constitutional terms.

Meru Governor Kiraitu Murungi, in an interview, said part of the ‘mathematics’ is the formation of a regional party. He also made an indication that he may not be defending his seat on a Jubilee Party ticket.

“Mt Kenya region does not have a party because people have never owned Jubilee… What we need is a party owned by our people. This is the debate we are having now.

“I have done six elections and I have never run under one party twice… We are in Jubilee but we are also looking at what formations will come up in 2022. Personally, I am doing my own mathematics,” Mr Murungi said in an interview with a local TV station.

According to the Njuri Ncheke Secretary-General Josphat Murangiri, plans are in top gear to form a formidable political party for the Mt Kenya east region.

“We will soon have a major meeting where we have summoned governors and senators from Meru, Tharaka Nithi and Embu to chart the way forward. Elders have decided to take a leading role because our politicians have failed to unite. We cannot remain as underdogs forever,” he said.

The Meru County Assembly Majority Leader Victor Karithi is of a similar opinion.

“Once the coronation of Speaker Muturi is out of the way, the next big agenda in this region shall be the formation of a political party. There’s no way we will continue clinging to political parties we do not own,” he said.

Talk of a united Mt Kenya East political front started way back in 2012, when politicians from the region formed a caucus that led to the formation of the Alliance Party of Kenya (APK) popularly known as the Bus.

However, the expectation that the party would be a force in the east of the mountain disintegrated following supremacy battles among a section of the leaders.

Murang’a Governor, Mwangi Wa Iria, however thinks the Mt Kenya region should ignore Speaker Muturi’s elevation, adding that it had no political significance. According to Mr Wa Iria, the Speaker jumped the gun, arguing that President Uhuru Kenyatta is the de facto regional kingpin who cannot be replaced until his presidential term ends.

“In fact, we will carry out a cleansing ceremony at the shrine. We had clear instructions during the Sagana meeting that for now the focus should be on development of the region and cease politics but what we are seeing is totally different,” the county boss said.

Mr Munya said the President was in charge of the vote-rich Mt Kenya region and there was no political vacuum and he will assist the Gikuyu, Embu and Meru communities in picking his heir upon the expiry of his second term in 2022.

“What seat is that? Where is its office? Is it in the Constitution? Does it mean when he speaks we should all remain silent?” the CS posed.

A related story in yesterday’s Sunday Nation erroneously named National Assembly Majority Leader, Amos Kimunya, as one of those opposed to the speaker's coronation as the Gema spokesman.