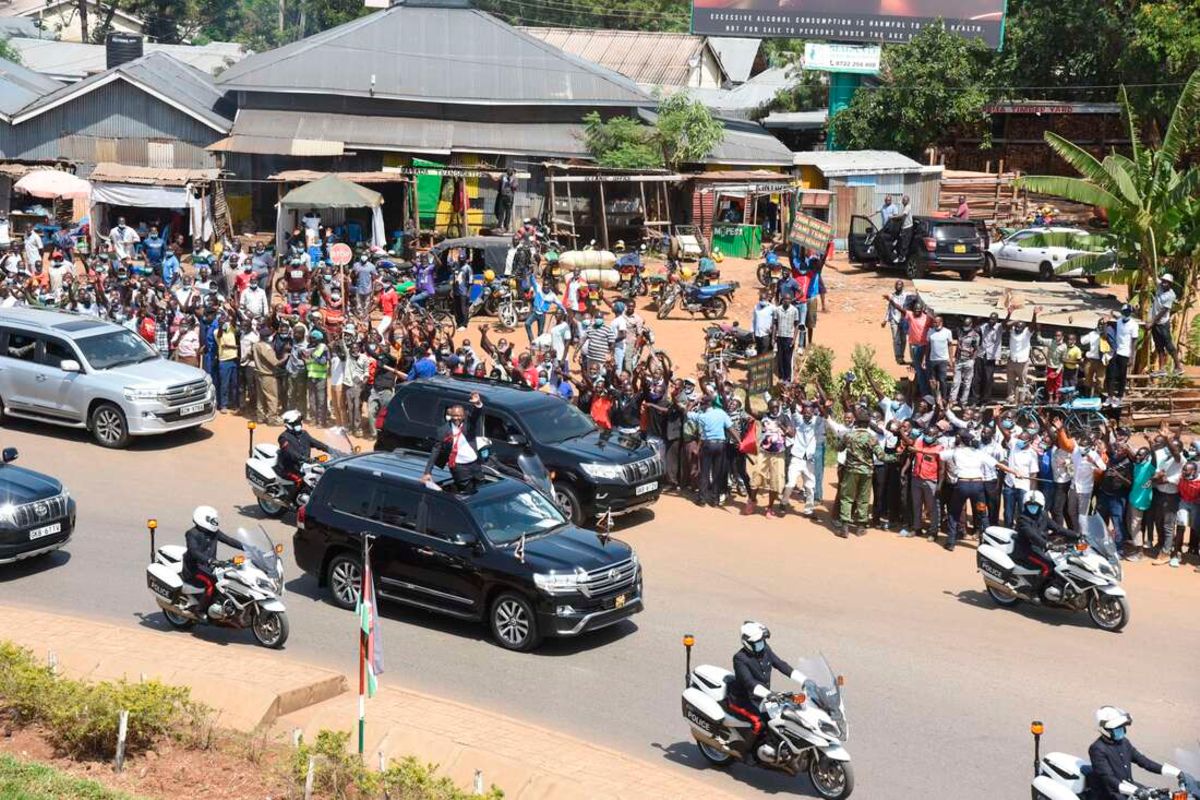 Uncertainty surrounds President Uhuru Kenyatta’s planned visit to the Western region following a ban on all public and political gatherings by the Ministry of Health to control a surge in Covid-19 infections.

President Kenyatta was expected to begin his three-day tour of the region Sunday to meet leaders and inspect government projects. But the visit now lies in doubt following the ministry’s directive on Friday.

Already, Deputy President William Ruto has announced a postponement of all of his planned meetings following the directive by Cabinet Secretary Mutahi Kagwe.

ODM leader Raila Odinga asked Kenyans to take up the Covid-19 vaccines and also urged the government to speed up the vaccination of Kenyans.

"Having been a victim of this deadly virus, I urge all those who are currently eligible for vaccination to get vaccinated,” Mr Odinga said on Friday as he got the jab.

Western Kenya has been battling a surge in the Delta virus. The region has been on a partial lockdown. Politicians, including the President, Dr Ruto and Mr Odinga, have been accused of hosting super-spreader events.

Contacted Saturday on the President’s planned visit, State House spokesperson Kanze Dena said a statement on the matter would be issued later.

“We have just landed back (in reference to President Kenyatta’s UK tour) and we will be communicating on the details of the tour later,” she said.

More on this: Inside Uhuru’s Sh20bn basket of goodies from London

And even as the Western region awaits the visit by the President, bickering and supremacy fights among politicians in the area continue.

MPs and senators from the region have accused governors of keeping them in the dark on the preparations. Some leaders also accused the county bosses of locking ANC leader Musalia Mudavadi and his Ford Kenya counterpart Moses Wetang’ula from the programme.

A leaders meeting planned for Friday did not take place, with MPs saying they did not receive any communication.

“We shall meet in Nairobi next week to deliberate on the visit and thereafter invite governors to join us before we can sit again with the Head of State to plan the official tour,” said Mr Savula.

“We don’t mind how long it will take before the President visits Western, but the planning must be inclusive. When he visited Nyanza, Raila Odinga organised with all leaders from the region, similarly Kalonzo Musyoka did the same when the president toured Ukambani. We still insist that our leaders, Musalia Mudavadi and Moses Wetang’ula must be fully be involved in the preparations,” said the Lugari MP.

Allies of Mr Mudavadi and those of Mr Wetang’ula have threatened to boycott the tour, arguing their party leaders were not involved in the plans.

“President Uhuru Kenyatta is the Head of State and has the mandate to visit any part of the country without express permission from anyone. I support any initiative that is supposed to develop our region,” noted Mr Osotsi.

He said those who are opposed to the President’s visit had also boycotted a meeting with Dr Fred Matiang’i who is the chairman of the development implementation committee at the Kenya Institute of Curriculum Development (KICD) where the projects the President is coming to commission were discussed.

“They skipped the meeting claiming that Mr Mudavadi and Wetang’ula were not involved. Their politics is displaced and should be discouraged. Their intention is to scuttle the chance to engage the President so that he can bring development to Western but want to blame him to have sidelined Western and taken all development to Nyanza,” said Mr Osotsi.

Mr Osotsi, an ANC nominated MP, said the President had a good reason why he engaged the governors since the tour had a development agenda.

“This tour is not about the political party leadership or regional supremacy but will focus on development that will impact positively on communities in the region,” said Mr Osotsi.

Tongareni MP Eseli Simiyu dismissed the opponents of the President’s visit saying the governors’ meeting with the President was final.

“I am sure the President will meet all leaders when the visit is due. They should remain calm and understand the protocol of the president’s visit. He can come to Western without consulting,” said Mr Simiyu.