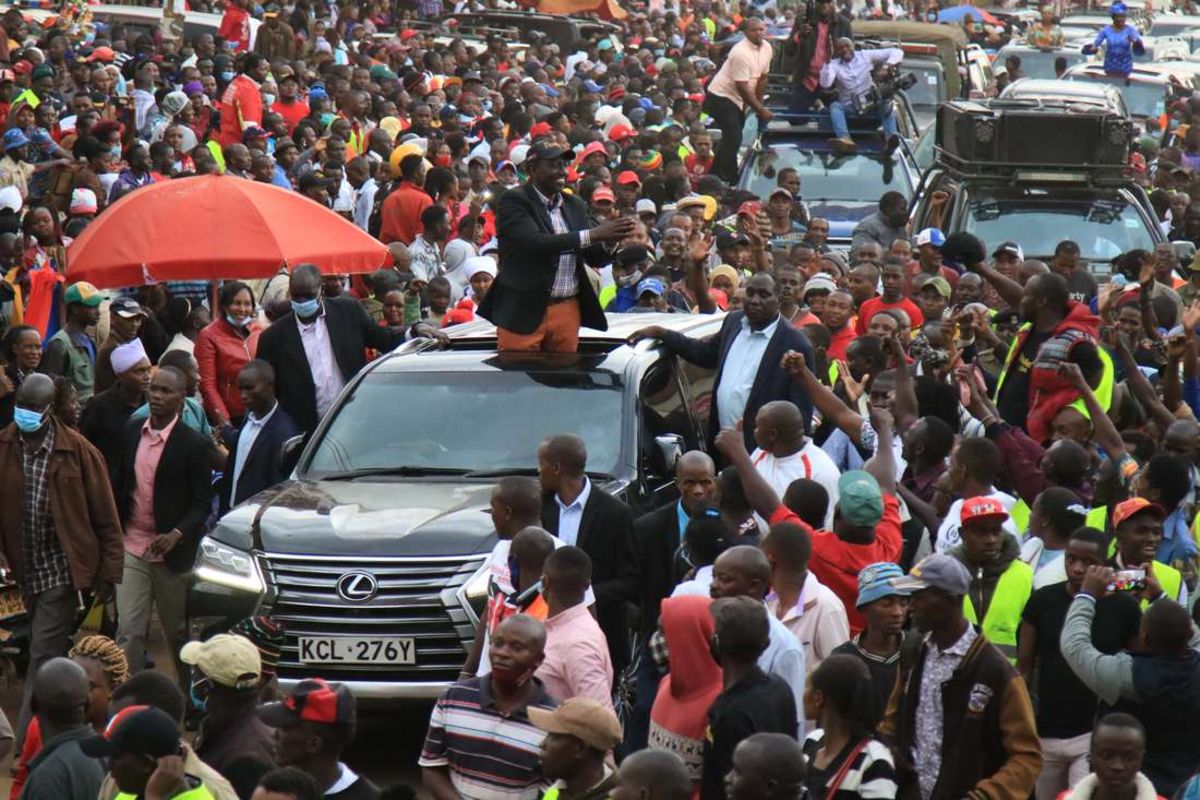 Besides the decision to ditch Jubilee Party in favour of the rebranded United Democratic Alliance (UDA), Dr Ruto has chosen to shun regional kingpins in favour of mostly first-term MPs as a strategy for rallying support for his State House bid across the country.

The DP is also staking his bid on President Kenyatta’s restive Mt Kenya region, which he and his boss used in 2013 and 2017 to ascend to power.

What remains to be seen is whether he can rally the mountain behind his candidacy without going through President Kenyatta, and what effect his continued focus on the eight-million-vote region will have on his popularity in other regions.

On the choice of running mate, the DP has taken another gamble by not propping up any clear Number Two and instead surrounding himself with many leaders who are almost at par in terms of influence, leaving him as the absolute power holder in the group that backs him.

“I’m not looking for an alliance with anybody. We have millions of hustlers behind our quest, and those people—the grocers, the boda boda and the small business owners—will take us to State House,” the DP said in an interview recently.

But perhaps the biggest gamble of the DP’s much-touted bottom-up economic approach to power is his pledge to shift focus from the tribe as a factor of political mobilisation.

Whether or not he will succeed in rallying ‘hustlers’ to vote without regard to their tribes will be the DP’s biggest test in 2022.

“The DP must appreciate that Kenyan politics is based on tribes and the regional kingpins. Besides the Rift Valley, Ruto does not have the support of any other leader of a tribal bloc,” University of Nairobi’s Herman Manyora argues. “There’s also a high possibility at this point that Ruto will face a united force comprising the One Kenya Alliance and Raila Odinga,” he adds.

Prof Ken Oluoch, who heads the Political Science department at Moi University, said the idea around what exactly the bottom-up economic model entails has not been crystallised yet, giving opponents a chance to attack it in its infancy.

Political analysts say the DP would need overwhelming political backing from Central Kenya at the 2022 polls, combined with his Rift Valley backyard votes, to trounce an alliance of the kind President Kenyatta and ODM leader Raila Odinga are trying to craft.

The don says Mt Kenya is vital to all presidential aspirants in next year’s poll and the DP might be the biggest casualty depending on how the region will vote.

“Solid backing from the bloc will be a plus. However, from the look of things, he’s unlikely to get half of it,” Prof Oluoch cautioned.

The DP has often paraded scores of MPs to project his camp’s power, but analysts argue relying on lawmakers, who don’t necessarily command any regional following, is risky since more than 60 per cent of MPs lose their seats at the polls.

“Relying on first-term MPs is quite a gamble. However, this can only pay off if the MPs themselves can prove their worth,” he argued.

The DP will also have to do a balancing act on his choice of running mate, with Mt Kenya and the Coast already laying claim to it, as Western is slowly edged out of consideration for the Number Two post in the DP’s camp.

“Yes, indeed Mt Kenya region wants the DP’s running-mate slot...We know our boss is magnanimous and he will repay us adequately. Personally, I’m not fronting anyone,” Murang’a Senator Irungu Kang’ata told the Nation.

But former Sports CS Rashid Echesa, DP Ruto’s key ally from Western, said it was too early to rule out the probability of the region bagging the running-mate position.

“If Western manages to give him 60 per cent of our votes, we shall go for a big position — that of deputy president,” Mr Echesa told the Nation.

However, Mumias East MP Benjamin Washiali, another Ruto ally, admitted their numbers might throw them off the running-mate matrix.