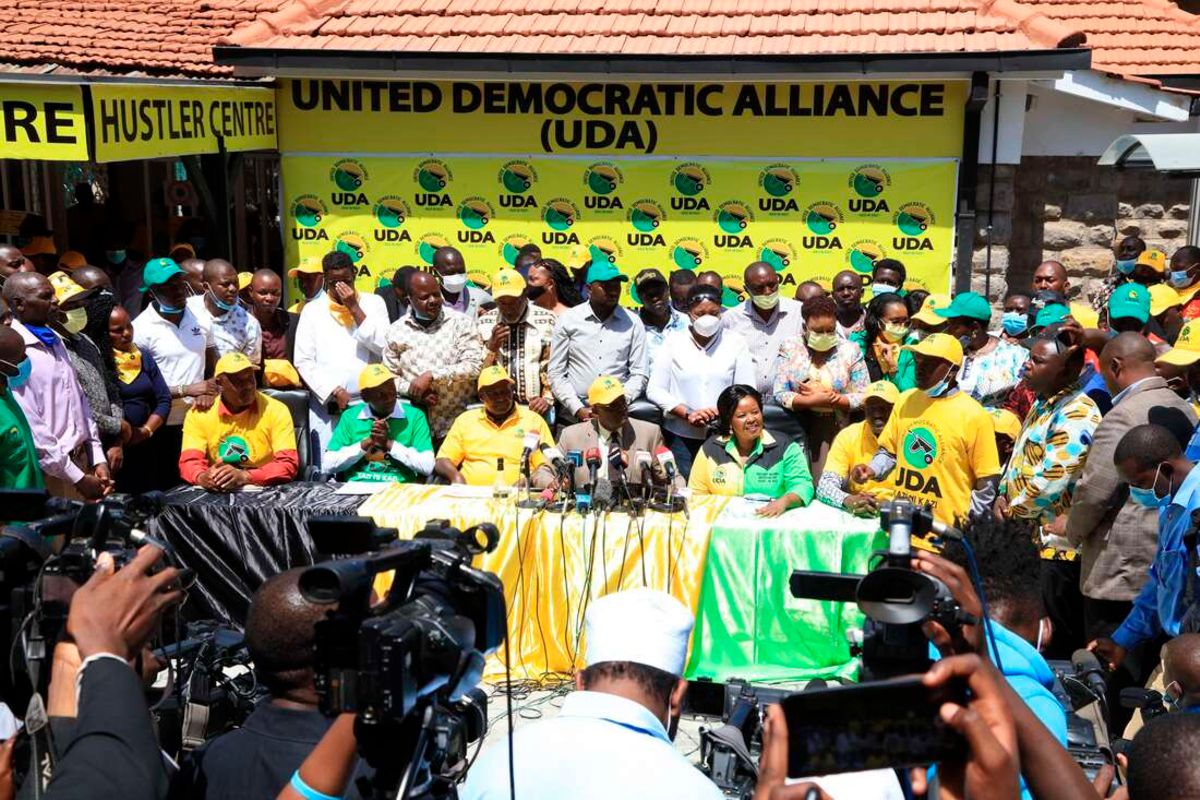 Deputy President William Ruto’s United Democratic Alliance (UDA) has made a few changes to its top leadership while retaining some officials as the party focuses on his presidential bid.

The officials will also be members of the National Executive Committee, a top decision-making organ with a role in party grassroots elections and nominations.

Since the unveiling of UDA in late February, Veronica Maina (secretary general) and Johnson Muthama (chair) have been the only officials known to the public. The party now boasts of over 2.5 million members.

The latest changes come after Ms Maina admitted that there were errors in the previous list.

In changes gazetted by the Registrar of Political Parties on Friday, some of the names in the list released in early October like deputy secretary general in charge of programmes Daniel Sigei, have been dropped.

Ms Maina will now have three deputies up from the initial two. They are management consultant and strategist Eliud Owalo, Mohamed Abdi Sahal of operations and Daniel ole Sambu (programmes).

Former South Mugirango MP Omingo Magara, who has been leading the People’s Democratic Party (PDP), is now UDA’s national treasurer, a position he once held in ODM.

Ms Nderitu said individuals dissatisfied with the changes have until Friday next week to submit their complaints forcing her to recall it even as it emerged that some elected leaders were uncomfortable with their rivals in the 2022 General Election serving at the helm of UDA.

“Any person with written submissions concerning the intended change by political party shall within seven days from the date of this publication, deposit with the Registrar of Political Parties,” she said.

The latest changes came after Ms Maina admitted that there were errors in the previous list forcing her to recall it even as it emerged that some elected leaders were uncomfortable with their rivals in the 2022 General Election serving at the helm of UDA.

"The United Democratic Alliance on October 12, 2021 formally conveyed to party faithful and general public a list of 34 officials who will form the NEC in accordance with Political Parties Act 2011,"

"The party wishes to inform the general public that there was an inadvertent error in that list and therefore an amended list will be issued in due course," she said in October.

After putting off grassroots elections twice, confusion still rages on when the party is set to hold its party elections even as it emerges that elected leaders do not want to be left out in the exercise.

Some Tanga Tanga lawmakers admitted that for the sake of daily operations, the party must have interim officials until that time when they will officially resign from Jubilee Party and register as UDA members.

The lawmakers want to stage a mass exodus in May next year when the Independent Electoral and Boundaries Commission (IEBC) cannot hold a by-election in case of expulsion from the party.

Kimilili MP Didmus Barasa, disclosed that UDA elections have been delayed because the majority of elected leaders wish to participate in the party grassroots elections but if done today, they might be locked out because they have not officially left the ruling Jubilee Party to Wheelbarrow party.

"I have no problems with those names because they are caretakers who are just holding briefs for us. By next February, elected leaders will no longer be at loggerhead with the law in jumping to another party hence we will officially leave Jubilee and be in those positions," he said.

But Ms Maina dismissed the claims from a section of leaders that party elections will only take place after elected leaders resign from Jubilee, which sponsored them to Parliament.

“That can’t be further from the truth,  we are yet to decide on when to do elections. We are pushing our own targets when it comes to registration but not because elected leaders are yet to join UDA,” she told the Nation.

“When time comes for elected leaders to join our party, they will join. If we hold grassroots elections now, yes, elected leaders cannot be officials but we are also able to accommodate them at a time when they are free to join us,” Ms Maina added.

Kilifi North MP Owen Baya, another ally of the DP alluded that the list of NEC members which will be embraced by everyone will be derived from the party elections.

"That list is purely interim for the purposes of fulfilling operational requirements.

The party will hold elections at an opportune time. A deliberate effort was made to ensure that all counties have representation in the interim arrangement," Mr Baya elucidated.

Mumias East MP Benjamin Washiali added that: "Whoever becomes an official of UDA does not matter much, what is important is the team spirit."