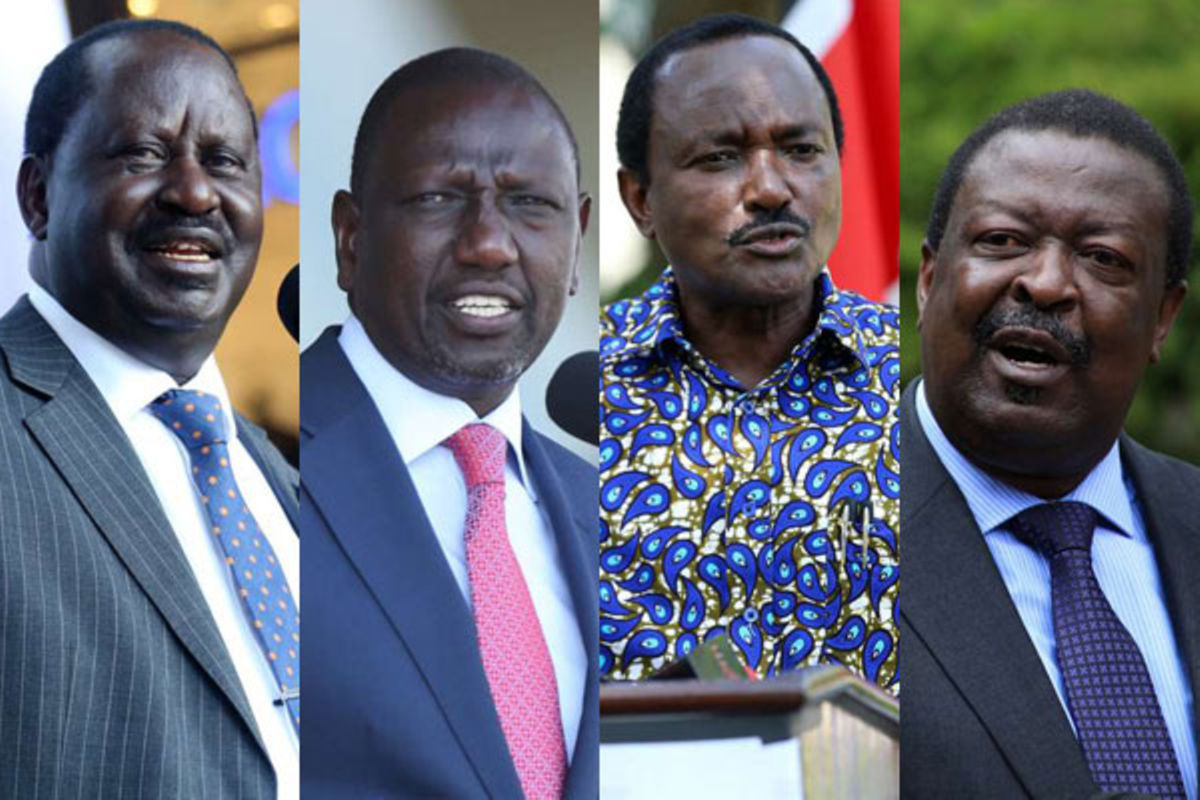 Top presidential hopefuls in the 2022 General Election are facing an uphill task convincing the vote-rich Mt Kenya to back their bids as politicians make huge demands in return for their support.

Apart from the running mate position, which different politicians say is the bare minimum and is not negotiable, proposals for guaranteed minimum return prices for tea and coffee, a favourable tax regime to cushion small businesses from collapse and funds for traders are also emerging at the top of the region’s wish list.

Leaders are also staking a serious claim to key government positions, including those of Cabinet and principal secretaries, as well as ambassadorial posts.

Deputy President William Ruto, ODM boss Raila Odinga (should he declare interest), Musalia Mudavadi of Amani National Congress (ANC) and Wiper’s Kalonzo Musyoka are all eyeing the over six million votes in the region to bolster their presidential quest.

The number of voters in the region is expected to increase by close to 5.9 million votes following the yet-to-be-launched mass voter registration by the electoral agency IEBC, making Mt Kenya the largest swing vote.

Political analyst and University of Dodoma lecturer Amukowa Anangwe argues that if the region makes too many demands in the succession arrangement, it is likely to scare off some of the presidential candidates.

“When you are involved in a bargaining process, you begin by raising the stakes. If you raise your stakes too high, even potential suitors may run away from you. Mt Kenya should remain open-minded and realistic to the politics of Kenya,” he said.

“Any presidential candidate can simply say, ‘Yes, I will agree to all that you want in the next government’. But the story of memorandums of understanding has been in Kenyan politics. If it is unrealistic. It will be disowned immediately if the candidate wins.”

Already, Dr Ruto and Mr Mudavadi have promised to pick their respective running mates from the region.

In interviews with the Nation, politicians coalescing under different groups said the 2022 Mt Kenya expectations have been defined following the decision of the Court of Appeal on the Building Bridges Initiative (BBI), which sought to amend the Constitution.

“To get the Mt Kenya vote, one must now guarantee that their government will deliver what BBI was meant to deliver to us: one man, one vote, one shilling, devolution of more resources and presence in government,” Nyeri Town MP Ngunjiri Wambugu said.

Ndaragwa MP Jeremiah Kioni, who is also the chairperson of the Constitutional Implementation Oversight Committee, said each presidential candidate must guarantee the region its resources, which he said must be commensurate with its number of votes.

“Unlike other times, this is our time as Mt Kenya to bring our issues to the table and not a candidate. The loss of the additional Sh53 billion, survival of our protected constituencies, subdivision of our large constituencies and increased allocation of bursaries on ‘one man, one vote, one shilling’. We are not saying that other regions should lose for us to gain, we want our fair share,” he said.

Leaders of the Mt Kenya caucus, led by Narc Kenya’s Martha Karua, Gatundu South MP Moses Kuria and The Service Party leader Mwangi Kiunjuri, have also come up with a political wish list for those targeting the region’s vote.

Ms Karua said Mt Kenya leaders plan to meet for what they call the Limuru III conference to avert a pre-2022 poll split even as the region positions itself for the post-Kenyatta era.

“We have a date next week for the validation process of these demands and proposals to be presented in the Limuru III meeting. We shall then agree to take that wish list to whichever presidential candidate we support, and as the candidates come to campaign in our region, we expect them to respond to the issues,” Ms Karua said.

But Mr Kuria was more categorical.

Alongside former Gatanga MP Peter Kenneth and former Kiambu Governor William Kabogo, the leader of Tujibebe Wakenya Party (TWP), he said on Monday that it had been agreed the position of Deputy President remains non-negotiable and a proportionate share of government.

“We have agreed that the position of Deputy President is not negotiable and must be commensurate with our votes. We also want a proportional share of the government…. If you have 22 ministers, six to seven have to come from our region. We want 40 percent of principal secretaries and parastatals. This is not a favour we are asking for, it is our right,” said Mr Kuria, leader of Chama Cha Kazi (CCK).

Dr Ruto’s allies from the region have already crafted economic and political demands they want agreed on with the DP before the 2022 elections and have formed a team to spearhead the talks.

The legislators have formed a team to agree on the economic intervention needed in Mt Kenya and the political positions the region should get after 2022 if the Ruto team wins power.

“We know who our preferred candidate is and our house is in order. We have … a plan to consolidate the economic suggestions into a workable plan and policy interventions with the DP. The rest can negotiate with whoever they are interested in,” Mathira MP Rigathi Gachagua told the Nation.

Kiharu MP Ndindi Nyoro said the DP needs to explain to them how he will revive the agricultural sector, more so coffee and tea.

“Some of these things we are now discussing with the DP could have been done but those who are there do not focus on the welfare of Kenyans. We have been with a President from this region for almost nine years now but nothing has happened,” Mr Nyoro said.