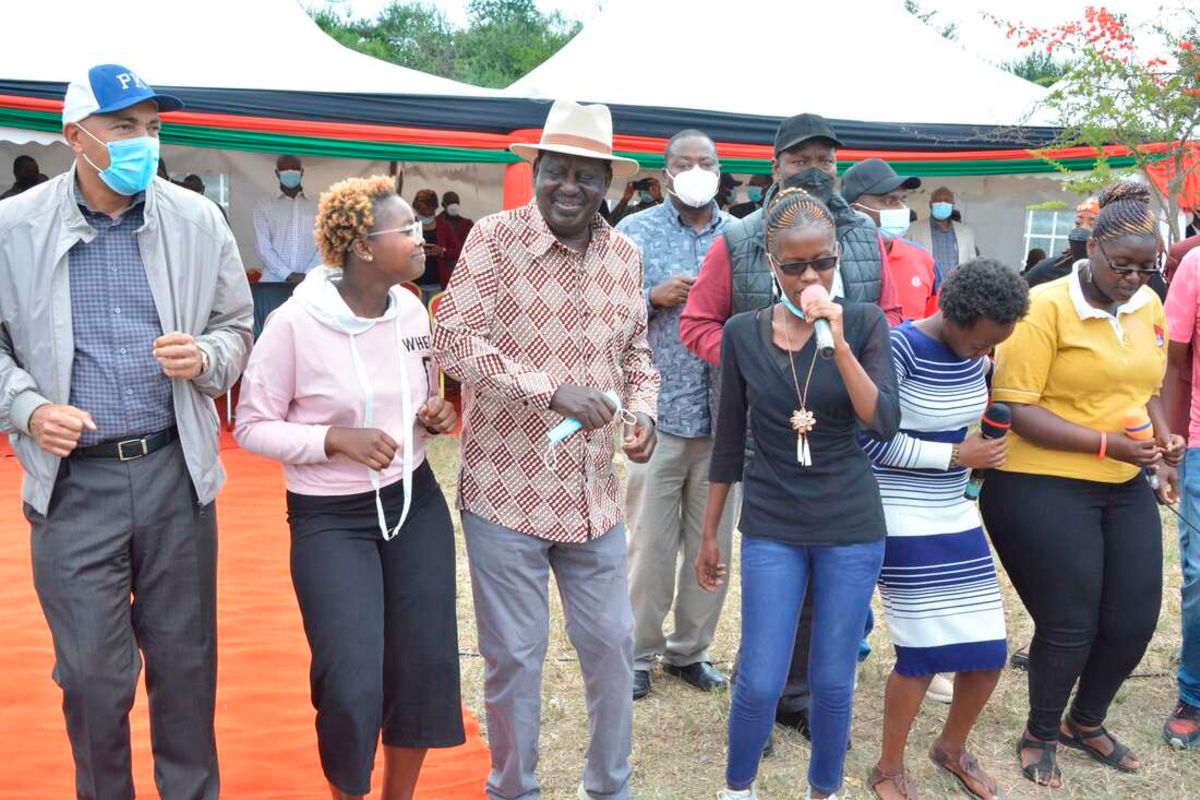 Orange Democratic Movement leader Raila Odinga has assured the Kenyan youth that they will be appointed in plum state jobs if he is elected president in 2022.

Reacting to issues raised by his youthful supporters in Naivasha on Saturday, Mr Odinga said “his administration” will give the young people plum positions.

“We don’t want to be promised political positions as has been the case in the past, but we want an assurance that we will be accorded those posts,” said Naivasha youth leader Monica Mwangi.

Mr Odinga said that 70 per cent of the population was made up of youths aged below 35-years. He assured the youth that their issues will be adequately addressed.

“We shall give friendly loans with tax exemptions of at least seven years,” he said.

He admitted that Keroche Industries has faced "unfair competition" from other players in the liquor industry.

Only an enabling environment, he noted, will spur growth in the private sector, thus leading to job creation for thousands of graduating youths.

The ODM leader took a swipe at the Jubilee administration over the 2013 promise of giving laptops to all class one pupils joining school at the time.

“They branded us as analogue, priding themselves as being technologically savvy, while promising children laptops…what happened?” he posed.

Describing Naivasha as a commercial hub, he admitted that the infrastructural development would shore up the growth of the lakeside town and create jobs.

He acknowledged that the cost of living has skyrocketed, while urging the government to reduce the cost of fuel which had taken a toll on many Kenyans.

The party’s secretary general Edwin Sifuna called on the government to lift the curfew.

“Naivasha economy largely depends on the thriving hotel industry and the curfew has greatly affected the sector, leading to loss of jobs…it is only prudent to have the curfew lifted,” Mr Sifuna said.

Mr Odinga called for the youth to turn up in large numbers and be vaccinated against Covid-19.

He reminded the youths of the need for unity, quipping” Sikuja kutafuta wafuasi ila nafuta  washirika.” (I did not come to look for followers …but supporters).

Others who spoke included Nakuru Governor Lee Kinyanjui who described the ODM leader as the best bet for the presidency come 2022.

He commended Mr Odinga for creating time to listen to issues affecting the people, “unlike others who were making roadside declarations,”

“Mr Odinga's track record speaks for itself and he is best suited to succeed Mr Uhuru Kenyatta,” said the Nakuru governor.

Suna East MP Junet Mohamed chided the Deputy President William Ruto over his decision to hold a meeting at a private home.

“Those who held a meeting at a private residence (in Kajiado) should apologise,” he said.

Mr Odinga later toured Naivasha town and its environs and called on the locals to shun ethnicity and coexist harmoniously.