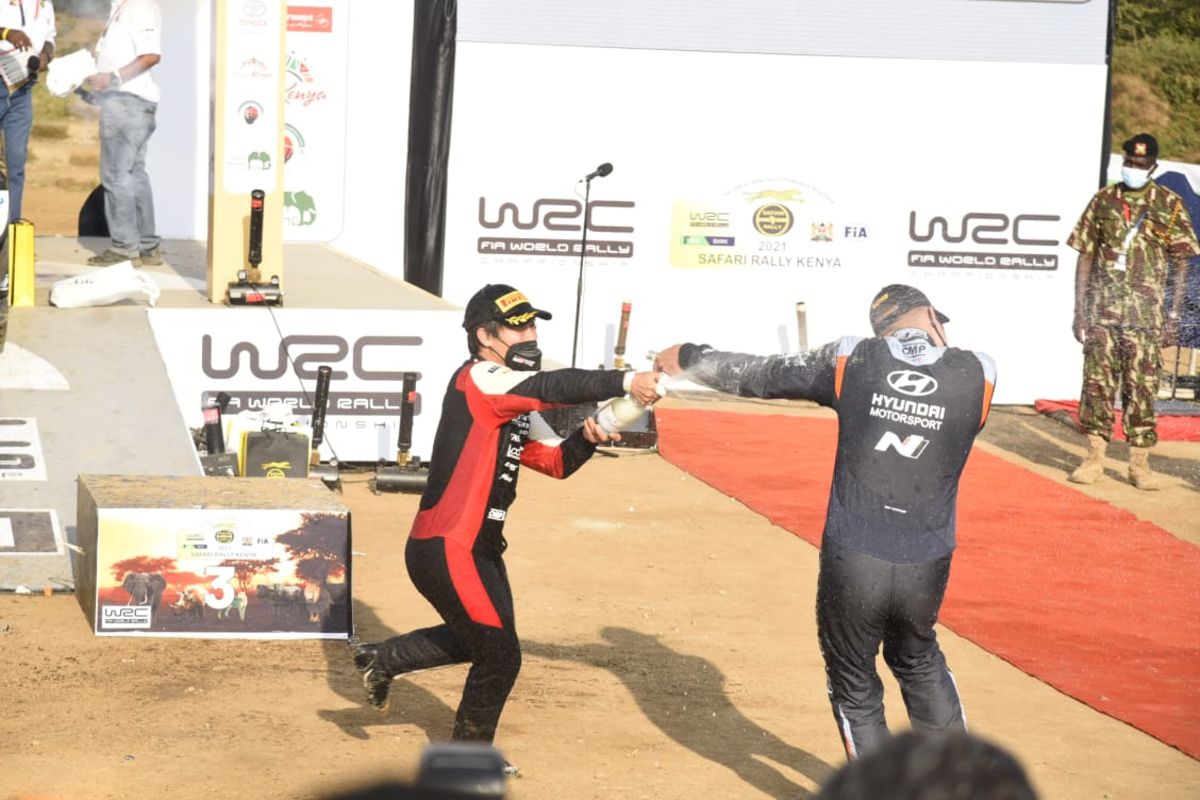 Kenya’s dream of getting the Safari Rally back to the high-profile FIA World Rally Championship (WRC) happened  with resounding success after a 19-year wait.

President Uhuru Kenyatta witnessed this historic moment. At the end of the four-day gruelling competition , the President announced that the Safari will remain in the 13-round WRC roaster until 2026 .

He made the remarks during the prize-giving ceremony at the Kenya Wildlife Service Training Institute in Naivasha which was the headquarters of the rally for the last two weeks.

The rally has been part of motorsport folklore since its inception in 1953 when the local motorsport fraternity decided to commemorate the coronation of Queen Elizabeth II in a more adventurous way.

What started as a marathon race grew to become the toughest rally in the world which attracted foreign teams in the 60s.

At the time, top professionals usually returned home empty-handed after being beaten by locals, but that changed in 1972 when Hannu Mikola of Finland and Swede Gunnar Palm broke the jinx behind the wheel of a Ford Escort 1600RS.

In 2002, the Safari exited the WRC series. During that edition of  competition, no Kenyan finished the race because of safety and financial reasons. Last Sunday, however, three Kenyans; Onkar Rai, Karan Patel, and Carl “Flash” Tundo finished 7th , 8th and 9th, respectively.

Only 26 crews out of 54 starters finished the 2021 Safari.  This shows that although the new look Safari Rally is a sprint of about 320 kilometres, it remains as tough as the rally of yore which was a 5,000 km countrywide marathon.

Many people have been wondering whether there is any prize money for the winners. The answer is no.

Manufacturers compete in the WRC as a way of advertising their products. Currently, Toyota Motor Corporation of Japan is marketing the tiny Toyota Yaris, locally known as a Vitz, a model mainly associated with the fairer sex.

Companies use these speed machines to give them brand visibility. They even have a choice of being included in the car’s badge name like Gazoo in Toyota team.

Locally, motorsport has provided publicity to rally sponsors Kabras Sugar and KCB Bank. The involvement of Kenya Airways, as the official carrier of the Safari, gave the cash-trapped airline a huge marketing opportunity in traditional markets of continental Europe. KQ can turn this to their advantage to beat the Covid-19 induced economic downturn.

Giant telcos Safaricom is another beneficiary that will reap big for the next three years for sponsoring three young drivers  - Jeremy Wahome, McRae Kimathi, and Hamza Anwar -  who will compete in select WRC events outside the country through the FIA Rally Star Programme designed to give young drivers opportunity to grow professionally.

The Safari created positive international attention for Kenya in all major news outlets. Therefore, the government made a worthwhile investment by providing resources to ensure a successful  rally. is held.

Rallying is an expensive sport. A standard  R2 car retails for Sh18 million and a showroom version of the Yaris goes for Sh8.5 million. So this is not a sport for financially challenged individuals.

The Safari is known to be unkind. For example, Frenchman Thierry Neuville was staring at a possible first victory for Hyundai in Kenya before his car broke the rear right side suspension of this mean machine that costs Sh120 million only a few kilometres to the finish.

The winner, Sebastien Ogier, in a Toyota Yaris took home a lion carving and a souvenir Safari shirt. But the Safari was just another day in the office to justify his Sh370 million annual salary.

Close to half a million people lined up rally routes to watch the cars in action.This was another testament that rallying is one of the top sports in Kenya.