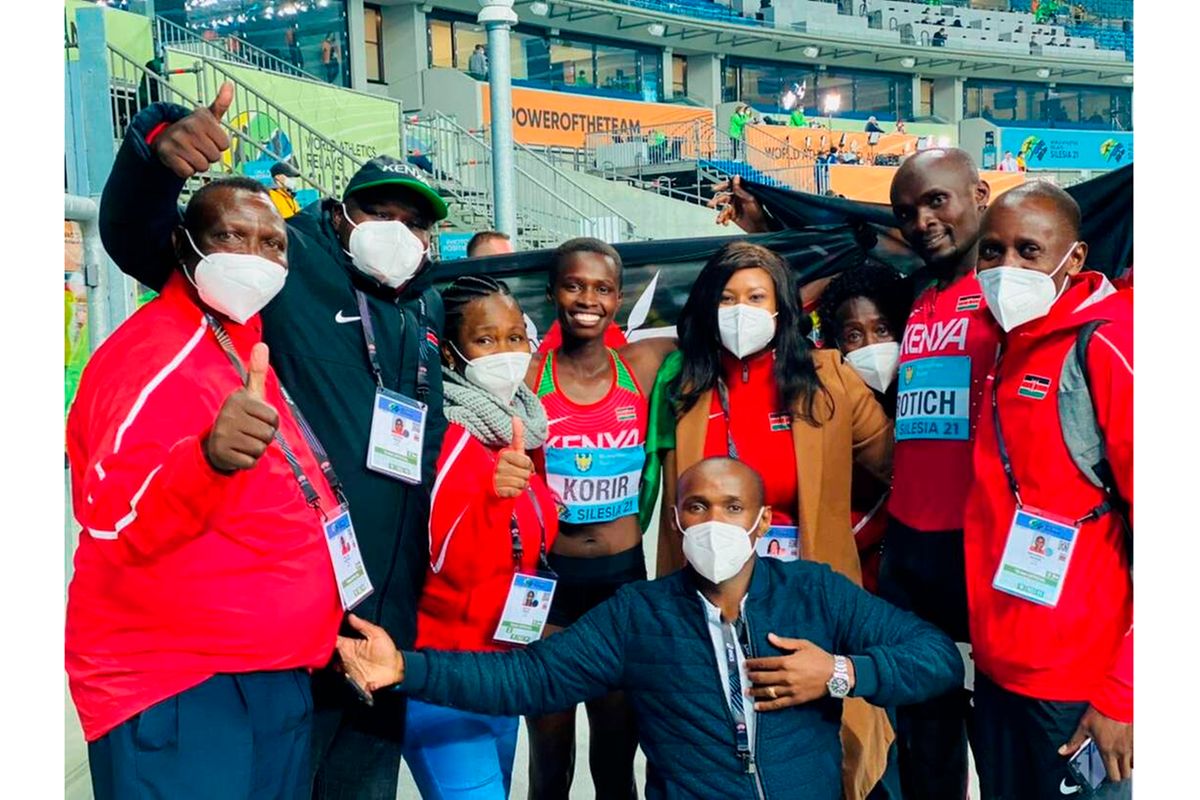 Kenya’s sprinters arrive back home today from the World Athletics Relays in Silesia, Poland. Two second place finishes and one third place at the Silesian Stadium crowned a rich experience for the team whose performance offers hope for the country’s sprinters.

The quartet of Mark Otieno, Mike Mokamba, Elijah Onkware and Hesbon Ochieng clocked one minute, 24.26 seconds to finish second in the 4x200 metres relay while the pair of Ferguson Rotich and Naomi Korir (3:41.79) also bagged second place in the 2x2x400m.

Since these are not full championships, medals aren’t awarded and there’s no medals table, but Kenya was highly visible among the top performers with South Africa, Ghana and Botswana also doing Africa proud.

Our women’s 4x200m quartet of Joan Cherono, Doreen Waka, Monica Safania and Maximila Imali may have finished way outside the podium, but their 1:38.26 national record was a positive drawn from the race won by hosts Poland in a national record 1:34.98.

Brave because the Kenyan squad in Silesia hardly had adequate training time owing to the coronavirus-enforced suspension of sports that didn’t offer them ideal conditions to build up to the global meet.

Credit must go to the Ministry of Sports, Culture and Heritage for financing the team’s preparations and travel. Indeed, under Cabinet Secretary Amina Mohamed, the financing of Kenyan sport has improved multiple times and will, in the long run, lift up quality of performance as the private sector also shores up the government’s initiative.

Through the Sports, Arts and Social Development Fund, the ministry has helped in the success of various sports programmes, with the WRC Safari Rally, World Athletics Under-20 Championships, Kenya’s participation in the Tokyo Olympic and Paralympic Games along with September’s Kip Keino Classic the key government-financed projects this year.

The performance by our team in Silesia was good indication that, with proper focus and more specialised training, we can reclaim our status as one of the top sprinting nations in the world.

A gold medal in the 400m hurdles at the 2015 World Athletics Championships in Beijing through the late Nicholas Bett and silver at the 2016 Rio Olympics through Bonface Mucheru is further proof of our potential.

“We did well, especially in an event like the hurdles where for the first time in many years, we had a flawless race,” sprints coach Stephen Mwaniki rightly observed.

Mwaniki notes that he and fellow sprints coaches have been working hard to develop a pool of sprinters. Consistent performances from the likes of 200m/100m specialists Mike Mokamba and Mark Otieno inspire hope to the pool. Kenya (Mark Otieno, Mike Mokamba, Samuel Chege and Alphas Kishoyian) wound up fourth in the 4x200m relay at the 2019 World Relays in Yokohama and the second place in Silesia last weekend was proof that progress has been made.

“Psychologically, this will motivate the pool of sprinters that we have,” added Mwaniki as we reflected on Silesia yesterday.

Lessons have been learnt in the mixed, men’s and women’s 4x400m relay races where we were out of our depth last weekend. And things weren’t made any easier by the fact that experienced Emmanuel Korir and Hellen Syombua failed to travel to Silesia for various, unforeseen reasons.

Syombua was in the Kenyan team that finished third in the mixed relay at Yokohama’s Nissan Stadium two years ago. The freezing conditions in the Polish city last weekend also posed a major challenge for our athletes.

Having digested the performances and conditions in Silesia, Mwaniki and co., along with Athletics Kenya’s technical department, must now roll up their sleeves and pay further attention to the sprints, along with jumps and throws.

An excellent platform to build on should be the World Athletics Under-20 Championships which Nairobi will host from August 17 to 22 at Kasarani.

It is from this group of juniors that we can build up to next year’s World Athletics Championships at Oregon’s rebuilt Hayward Field Stadium and to the 2024 Olympics in Paris.

Congratulations to our team in Silesia and welcome back home. You exceeded expectations, especially considering the turbulent build-up ravaged by Covid-19.

Hats off, too, to the Ministry of Sports, Culture and Heritage for facilitating Kenya’s full representation at the Silesian Stadium.