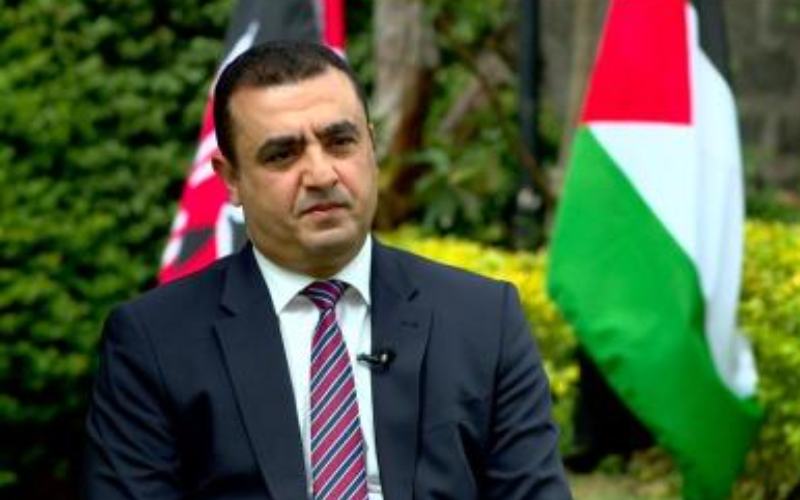 Palestine Ambassador to Kenya Hazem Mohamed Shabat has urged the international community to expedite the creation of an independent Palestine state to end Palestinians’ suffering.

In an exclusive interview with The Standard in the run-up to the commendation of the International Day of Solidarity with the Palestinian people — which is marked today, the envoy said Palestinians have continued to suffer brutality in the hands of Israel despite the UN and other global human rights groups declaring their occupation illegal.

Shabat accused the international communities, the UN and some powerful countries of failing to pressurise Israel through sanctions to commit to peace and end their occupation.

“The cost of the Israeli occupation of Palestine land should be made higher through sanctions after their failure to respect UN resolutions,” he said. He however said a lot needs to be done to stop human suffering in various parts of Palestine.

“We want to remind the international community that they have an unfulfilled duty to Palestinians and the suffering is still real,” he said.

Shabat said the lethargy among some powerful countries and the UN to impose sanctions on Israel for trashing many United Nations Security Council resolutions to resolve the conflict is setting a dangerous precedent globally.

He said Israel continued occupation of Palestinians’ land despite International Community pronouncements has led to radicalisation among the youth in Palestine and in other parts of the world.

“Israel has become the Bermuda Triangle of International law, and this has seen the rising number of terror groups that now feel anyone can enjoy impunity as long as you have weapons and soldiers,” he added.

While distancing himself from Hamas, Shabat blamed the formation of groups such as Hamas on the provocation and the illegal occupation of Palestinian land.

“As long as Israel is still illegally occupying Palestine land and committing atrocities against the Palestine population, these groups will continue mushrooming,” he said.

He, however, said Palestine had a ruling authority and a prime minister recognised by the international community.

Hazem hailed Kenya for consistently voting in favour of all resolutions on Palestine statehood and for peaceful resolution of the Israel-Palestine conflict.

Kenya supported the Quartet Peace Plan and the Annapolis Declarations which affirmed the commitment to the fulfilment of the vision of two states; a safe and secure Israel and a sovereign contiguous democratic Palestine, living side by side in harmony.

Shabat said the struggle for independence in African countries like Kenya and South Africa was an inspiration to Palestinians.

“As we look back to this date, we are still under full Israeli occupation in an apartheid regime similar to what South Africans and other African nations went through during the colonial era.”

He said plans were underway to deepen the relationship between Palestine and Kenya on other fronts such as culture and exchange programmes.

“Palestine has been painted in the media as a country full of conflict and negative things, but we want to engage Kenyans through culture, development and exchange programmes to show them the good side of Palestinians,” he said.

According to Shabat, the two-state solution was an imposition by the international community and unfair to Palestinians but for the sake of peace, they accepted it and wondered why it was not being realised.

He said Israel occupied 78 per cent of Palestine in 1948 and set a state in which most Palestinians were ethnically cleansed leading to two-third of their population turned into refugees.

Shabat said in 1967, the remaining 22 per cent of Palestine which includes Gaza, West Bank and Jerusalem fell under the occupation of Israel subjecting Palestinians to immense suffering.

“In Jerusalem, West Bank and Gaza, they are confiscating people’s houses on grounds that the houses might have belonged to Jewish before 1900, more than a century ago.”

He accused Israeli forces of subjecting Palestinians to what they were subjected to during the Nazi times in Europe.

He urged the International Community to enforce the UN resolutions, adding that Israel had demonstrated that it was not interested in the negotiations because it prefers the status quo to remain.

November 29 is observed as the International Day of Solidarity with the Palestinian People since 1978.

This date, which was chosen because of its meaning and significance to the Palestinian people, is based on the call by the UN General Assembly for an annual observance of the resolution on the partition of Palestine.

What has become known as the Partition Plan or the Resolution 181 (II) (link is external), intended to establish an Arab State and a Jewish State, and was adopted on November 29, 1947.

The International Day of Solidarity traditionally provides an opportunity for the international community to focus its attention on the fact that the question of Palestine remains unresolved and that the Palestinian people have yet to attain their inalienable rights as defined by the General Assembly.

Second journalist shot dead in a week in Mexico's Tijuana

Plane hit by train after crashing on tracks in California