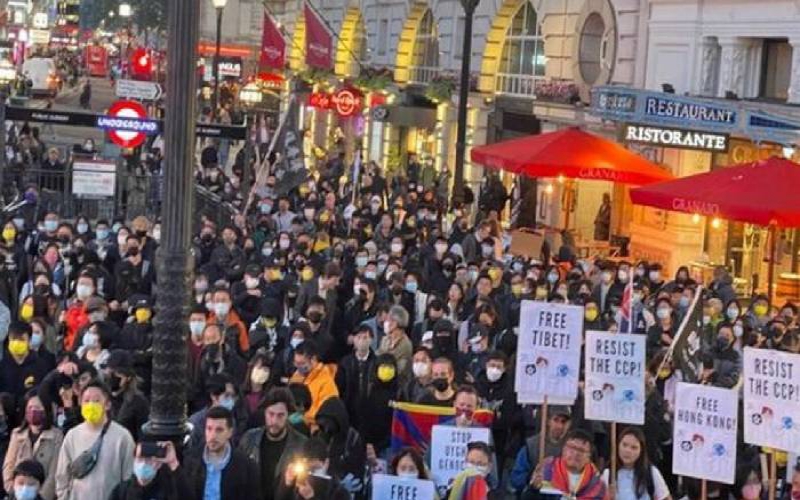 A coalition of Tibetan, Hong Kong and Uyghur communities protested in central London this week against the Chinese government over the curtailment of freedom of speech in China.

Hundreds of people came out on the streets of central London to condemn the continued brutal crackdown by the Chinese government.

This protest was organised to mark China's 72nd National Day.

Every year, China celebrates the national day on October 1 commemorating the formal proclamation of the establishment of the People's Republic of China on 1 October 1949.

"Under Mao Tsetung, 72 years ago, the Chinese Communist Party announced the invasion of Tibet and the Republic of East Turkistan. Mao called the invasion a 'peaceful liberation'. The 'peaceful liberation' of Tibet and East Turkistan has cost millions of lives of Tibetans and Uyghur people," said Tsering Passang, Founder and Convener, Global Alliance for Tibet & Persecuted Minorities.

Passang further said, "For the Tibetan and Uyghur victims of the Chinese regime's military occupation and repressive policy, there is nothing to celebrate so long as China continues to illegally occupy Tibet and East Turkistan."

"For the people of Hong Kong, there is nothing to celebrate as long as Beijing disregards the UK-China Joint Declaration and basic rights are not restored in Hong Kong," he added.

Tibet is ruled by the Chinese Communist Party government based in Beijing, with local decision-making power concentrated in the hands of Chinese party officials. The Chinese government uses blanket charges like 'inciting separatism' to suppress the voices of dissent.

Meanwhile, in Hong Kong, the people are facing increasing policing and crackdowns.

In the past years, China also has been rebuked globally for cracking down on Uyghur Muslims in Xinjiang by sending them to mass detention camps, interfering in their religious activities and subjecting them to abuse including forced labour.

Beijing, on the other hand, has vehemently denied that it is engaged in human rights abuses against the Uyghurs in Xinjiang while reports from journalists, NGOs and former detainees have surfaced, highlighting the Chinese Communist Party's (CCP) brutal crackdown on the ethnic community.

Group of Muslims demonstrate against killing of minorities in Kashmir Valley

Former US Secretary of State Colin Powell is dead

U.S. says Taliban talks in Doha were 'candid and professional'

Shock as Malawi's ex-deputy speaker shoots himself dead in parliament