Uganda’s Minister for Works and Transport Gen Edward Katumba has ordered the immediate suspension of Uganda Airlines crew who were on duty while a man hawked grasshoppers or Nsenene as is locally known.

"About the video making rounds on social media of someone vending Nsenene aboard Uganda Airlines, I have spoken to the leadership of the airline to take action against the staff who were in charge when this happened," Katumba tweeted.

Greetings,About the video making rounds on social media of someone vending Nsenene aboard @UG_Airlines, I have spoken to the leadership of the airline to take action against the staff who were in charge when this happened. pic.twitter.com/pNL3H44zok— General Edward Katumba Wamala (@GenWamala) November 27, 2021

Ugandans woke up to a video doing rounds on the web on Saturday morning, causing a buzz online.

The man, seen in this picture below could be seen scooping grasshoppers (Nsenene) and selling to excited passengers aboard the national carrier, en route to Dubai on November 26. 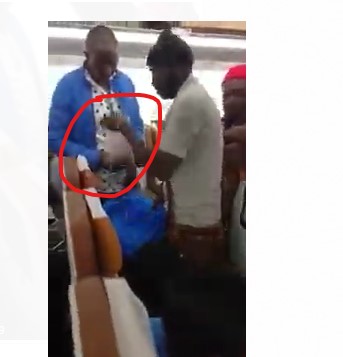 In a statement Saturday, Uganda Airlines condemned the act saying it happened just as passengers were boarding the flight.

“We will not take this conduct lightly as it undermines the spirit of the national carrier. No one should be exposed to unruly market experience on our flights,” the airline said.

But in a twist of events, Uganda’s national carrier, however, said they would consider adding Nsenene to its menu for local and international flights, upon request, adding it will boost the East African nation’s culture.

“We have picked lessons from this incident. Some of our customers enjoy Nsenene. The addition of the delicacy to our menu will bring the Ugandan culture to the world.”

Ugandan citizens could not resist commenting on the conduct in the video, some celebrating the move to add grasshoppers to the menu.

One user wrote: “It's unnecessary! This is our national airline and nsenene is a common delicacy which this season around was pretty scarce, let's just learn from this. Good enough Uganda Airlines has made a very clear statement that nsenene will be included on the onboard menu.”

Another user tweeted: “Indeed we can do better than that sincerely so that we don't mess up our new Airline.”

Second journalist shot dead in a week in Mexico's Tijuana

Plane hit by train after crashing on tracks in California